May 2, 2018 1:09 PM PHT
Rambo Talabong
Facebook Twitter Copy URL
Copied
'The above-named individuals tagged in the list are personally known to this body and to the community of Sagada as common and law-abiding citizens,' says the Sagada Municipal Council 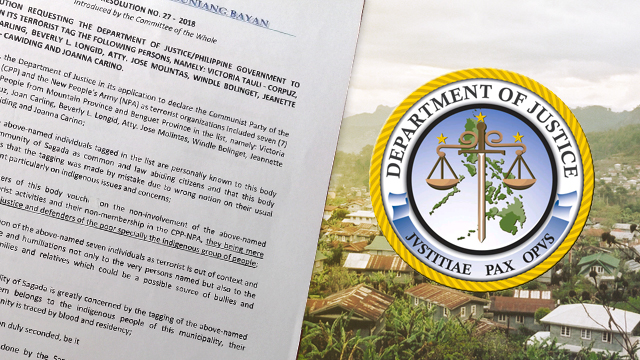 MANILA, Philippines – The Sagada Municipal Council is urging the Department of Justice (DOJ) to remove the names of 7 indigenous activists from its terror list.

In a resolution dated April 17, the town council asked the DOJ to remove the following names from the list of alleged terrorists:

“The above-named individuals tagged in the list are personally known to this body and to the community of Sagada as common and law-abiding citizens,” the council said in its resolution.

The council believes believes the terror tagging was done by mistake “due to the wrong notion on their usual peace involvement particularly on indigenous issues and concerns,” referring to the people it wants moved from the list. (READ: PH ‘terror’ list a ‘gov’t hit list’ – Human Rights Watch)

The DOJ, in a motion filed on February 21 before the Manila Regional Trial Court Branch 19, tagged at least 600 others on its list of terrorists in line with its goal to to formally declare the Communist Party of the Philippines-New People’s Army (CPP-NPA) as a terrorist organization.

The list was made two months after President Rodrigo Duterte issued Proclamation No. 374, declaring the NPA as a terrorist organization.

The Sagada council members said the 7 individuals are not communists.

“Members of this body vouch on the non-involvement of the above-named individuals in terrorist activities and their non-membership in the CPP-NPA,” it said.

The Cordillera Peoples Alliance (CPA), a federation of progressrive peoples’ organizations, welcomed the resolution of the Sagada council.

“The Sagada SB Resolution is another proof of the government’s baseless and malicious terrorist proscription list, which is only aimed at silencing political dissent and puts at risk the lives of indigenous human rights activists,” CPA said in a statement on Tuesday, May 1.

This is the second local government resolution urging the DOJ  to remove the same names from its terror list, after the Baguio City Council on March 19. – Rappler.com