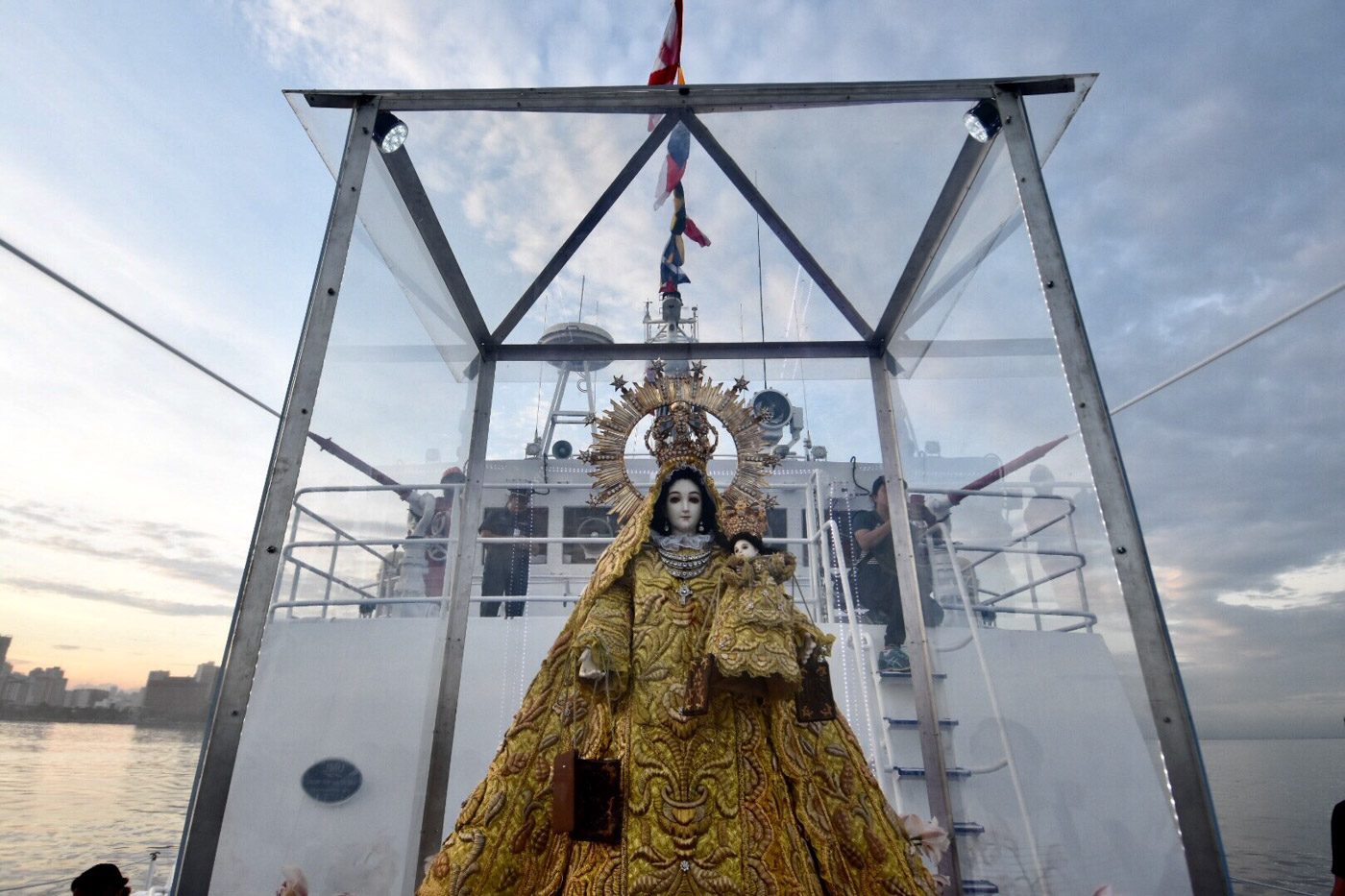 MANILA, Philippines – If you’re Catholic, you’ve most probably seen those brown scapulars with Mary’s image on one end, and on the other, an inscription that says, “Whosoever dies wearing this scapular shall not suffer eternal fire.”

It’s a sign of devotion to Our Lady of Mount Carmel, who, according to Catholics, appeared to Saint Simon Stock in 1251 and handed him a scapular as “a sign of salvation, a safeguard in dangers, and a pledge of peace and of the covenant.”

Centuries after this apparition, Augustinian Recollect missionaries from Spain brought the image of Our Lady of Mount Carmel to the Philippines in 1618.

On Friday, May 4, thousands of Filipinos marked the 400th year since the arrival of the image of Our Lady of Mount Carmel in the Philippines from Mexico, where the missionaries from Spain passed by.

Friday’s event, called “Salubong at Traslacion,” began before sunrise. At around 5 am, a fluvial procession was held in Manila Bay to reenact the arrival of the image of Our Lady of Mount Carmel in the Philippines.

The fluvial procession was followed by a Mass at the Quirino Grandstand, officiated by Davao Archbishop Romulo Valles, president of the Catholic Bishops’ Conference of the Philippines (CBCP).

Volunteers held umbrellas for guests, priests wore their hoods, and devotees fanned themselves as they attended Mass in the summer heat. Even Valles delivered his homily under a white umbrella held by a man in a cassock. Manila Archbishop Luis Antonio Cardinal Tagle, though not in the Mass, prepared a message that was read toward the end of the liturgy.

Tagle pointed out that Carmel, based on the Bible, is a place of prayer, and also a place where prophets preach about the true God. He said these two characteristics of Carmel can both be seen in Mary, the mother of Jesus.

He then appealed to Filipinos to live the values of Carmel.

(In a world that is noisy and that refuses to listen to the cries of  people especially the poor, bring Carmel back. In a world that worships false gods, let us return to Carmel.)

“Sana tumahimik ang mga baril at pagtangis at mapalitan ng katahimikang dulot ng totoong kapayapaan (I hope that the guns and the weeping will stop, and  replaced by the silence that comes from genuine peace),” he added.

The Mass was followed by a procession, called Traslacion, from Quirino Grandstand to San Sebastian Church, which houses the image. A highlight of the Traslacion was the image passing by Quiapo Church, where the image of the Black Nazarene was brought out to meet the image of his Mother.

Every Feast of the Black Nazarene on January 9, the image of Our Lady of Mount Carmel is also brought out of San Sebastian Church to “meet” the Nazareno image, in a tradition called “Dungaw.” – Rappler.com