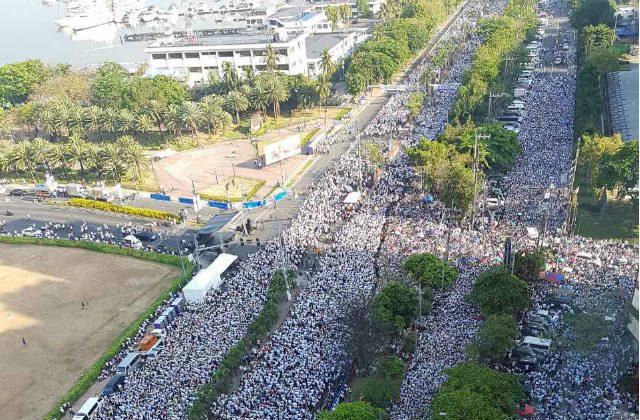 MANILA, Philippines (3rd UPDATE) – More than a million Filipinos joined the Worldwide Walk to Fight Poverty organized by the Iglesia ni Cristo (INC), or Church of Christ, along Roxas Boulevard in Manila on Sunday, May 6.

During this event, the INC bagged a new Guinness record for the largest human sentence, according to church-run Eagle News in a tweet at 10:20 am on Sunday.

The Philippine National Police (PNP) pegged the number of participants at 1.2 million as of 9 am.

INC, on the official website of Eagle News, said the Worldwide Walk to Fight Poverty started at 6 am on Sunday, and was set to happen simultaneously “in more than 300 sites across 18 time zones around the world.”

Born in the Philippines in 1914, the INC is a church that has at least 2.25 million followers, and is known to wield huge influence over government because of its practice of bloc voting. (READ: The rise of INC: ‘Stricter religions grow stronger’)

The INC has been hounded by accusations of corruption and extravagant lifestyles of some of its leaders, especially after a family feud in the INC leader’s family was made public in 2015. – Rappler.com