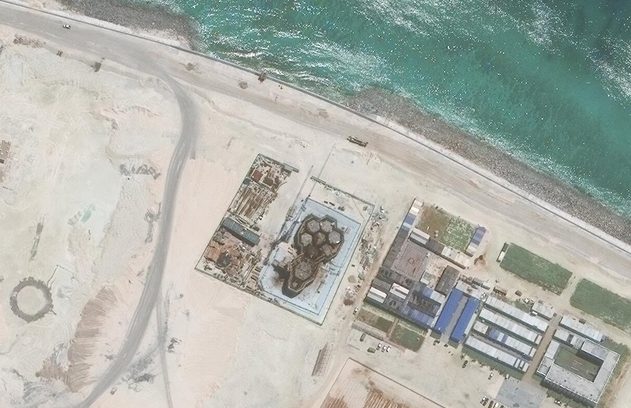 Facebook Twitter Copy URL
Copied
(UPDATED) 'This alleged militarization of the West Philippine Sea is very alarming and it poses a big threat to the country's national defense and security,' says Senator Antonio Trillanes IV in a resolution

MANILA, Philippines (UPDATED) – Opposition senator Antonio Trillanes IV filed a resolution seeking a Senate investigation into the Chinese missiles installed in the Spratly Islands, where the Philippines is one of the 6 claimants.

Trillanes filed Senate Resolution No. 722 on Monday, May 7, urging the Senate committee on national defense and security chaired by Senator Gregorio Honasan II to probe the reported missile installations.

The senator said China’s installation of weapons, facilities, and structures show there is “a clear policy of militarization” by the Asian giant in the West Philippine Sea.

“While the Philippines has previously forged economic ties with China, the security and defense relationship is a separate matter. Thus, this alleged militarization of the West Philippine Sea is very alarming and it poses a big threat to the country’s national defense and security,” Trillanes said in his resolution.

“China’s peaceful construction in the Spratly archipelago, including the deployment of necessary national defense facilities, is aimed at protecting China’s sovereignty and security. Those who don’t intend to violate [this sovereignty] have no reason to worry,” she said in a press briefing.

Aside from the need to assert the Philippines’ sovereignty and territorial integrity, Trillanes said the country should “reassert” its victory in the arbitration case on the disputed islands by strengthening ties with the US, Japan, Australia, and the Association of Southeast Asian Nations (ASEAN).

“There is also a need to ensure the preservation of the country’s defense and security by fast-tracking the implementation of the Enhanced Defense Cooperation Agreement (EDCA) and strengthening the implementation of existing laws such as the Archipelagic Baseline Law of the Philippines, the United Nations Convention on the Law of the Sea (UNCLOS), among others,” he said.

‘Senate should step in’

Senator Panfilo Lacson expressed support for the probe as he stressed the national security implications of China’s reported actions in the West Philippine Sea which the Philippine government has yet to confirm.

“I support the call for the Senate to investigate the issue. Any serious matter that has security implications on our country, the Senate should step in and exercise our oversight function,” Lacson said in a statement on Wednesday, May 9.

“If up to now, the government still has not confirmed the presence of a foreign country’s missiles in one of our islands, we may have a serious national security problem. Convening the National Security Council is the least that we should do, given the situation,” he added.

“Apparently, in line with the President’s amorous affair with China, the AFP (Armed Forces of the Philippines) has chosen to play the monkey that sees, hears, and speaks no evil whenever it comes to China’s aggressive escalation of military capabilities in the West Philippine Sea,” she said.

De Lima also noted that while it took China decades to build up its military infrastructure in the South China Sea, it took the Philippines, under Duterte, only “two years to surrender all its interests in the West Philippine Sea to China.” (READ: Duterte offers ’60-40′ deal to China in West PH Sea joint exploration)

Malacañang, for its part, reiterated that while it views the missile installations with “concern,” it was still tapping diplomatic channels to verify the report. – Rappler.com