May 9, 2018 10:05 AM PHT
Lian Buan
Facebook Twitter Copy URL
Copied
Special Prosecutor Edilberto Sandoval, the head of graft prosecutors, is the first to confirm interest in the post 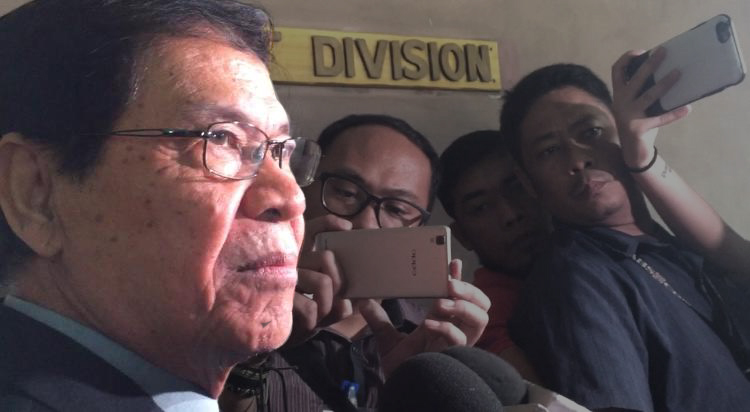 MANILA, Philippines – Special Prosecutor Edilberto Sandoval has applied for the post of Ombudsman, which will be vacant when Ombudsman Conchita Carpio Morales retires in July.

Sandoval, a former justice at the anti-graft court Sandiganbayan, told reporters that the Judicial and Bar Council (JBC) received his application on May 3. He is the first one to confirm his interest in the post.

Supreme Court Associate Justice Teresita Leonardo de Castro has been nominated to the post but she has to agree to the nomination before she would be considered.

Sandoval said he refused offers from people to nominate him, and opted to apply on his own.

“I want to be clear, na just in case may public officer na nagnominate sa akin, mabebeholden ako (in the event that a public officer nominates me, I will become beholden). So I applied,” Sandoval said.

President Rodrigo Duterte appointed him as special prosecutor in July 2017 and has a fixed 7-year term until 2024 if he stays in his position. Sandoval was a presiding justice of the Sandiganbayan, where he served for 14 years.

At the Sandiganbayan, Sandoval’s most controversial case was the plea bargain deal of retired Major General Carlos Garcia, the former military comptroller who was accused of corruption. Sandoval voted to grant bail to Garcia, but lost to a majority vote at the Sandiganbayan’s Second Division.

Garcia then struck a plea bargain deal  with Sandoval’s predecessor, former special prosecutor Wendell Barreras–Sulit, which was eventually upheld by a different set of Sandiganbayan justices.

The JBC has extended its deadline for applications to May 15.

Morales will retire on July 26. She said the most important trait of an Ombudsman is integrity.

“One has to be impervious to pressure. One has to have integrity. You may be the brightest fellow in the world, but if you don’t have integrity then forget it,” the Ombudsman said

Morales’ message to her successor? “Work begins at sunrise and ends at sundown. Even if you work on Saturdays, you will not be able to finish your work.” – Rappler.com