China firms in Marawi rehab once blacklisted by World Bank 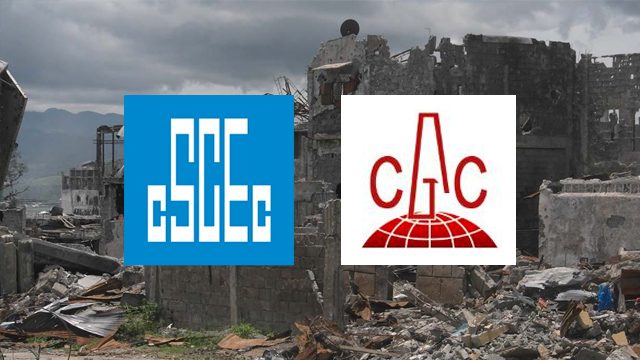 Facebook Twitter Copy URL
Copied
These two Chinese firms are now part of the Bangon Marawi Consortium, a group of Chinese and Filipino companies tapped to rebuild areas hit by the Marawi siege

MANILA, Philippines – Two Chinese companies poised to win a P17.2-billion contract to rehabilitate the former battle area in Marawi City were once blacklisted by the World Bank over corrupt practices in the Philippines.

The World Bank barred CSCEC and CGC for a period of 6 and 5 years, respectively, from participating in projects financed by the bank.

CSCEC, China’s largest building contractor, was reportedly notorious during the Arroyo administration. In 2004, it was also blacklisted by the Department of Public Works and Highways for 6 months over alleged violations of the procurement law. The World Bank described its 2009 case against the Chinese and Filipino firms as among its “most important and far-reaching cases.” It was widely reported in the Philippines, China, and other countries.

“Under the cartel’s system, bid prices were dictated by the cartel leadership; uncooperative bidders were forced out of the process before bids were submitted; winners were prearranged; and losing bidders, which in some cases participated to avoid displeasing influential members of the cartel, were compensated for their participation,” read the World Bank IVP 2009 annual report.

CGC and CSCEC protested the World Bank decision. According to previous reports, the Chinese companies – along with others on the list who contested – lost their appeals at the bank’s sanctions board.

The World Bank investigation happened during the administration of President Gloria Arroyo. The project – National Roads Improvement and Management Project (NRIMP) – was one of several projects involving Chinese firms that Philippine Congress investigated for corruption back then.

Her husband – then first gentleman Jose Miguel Arroyo – was also linked to the controversy by Senator Panfilo Lacson. He allegedly backed the Filipino contractor who was permanently blacklisted for colluding with the Chinese firms.

The DPWH order was also issued during the Arroyo years. It said CSCEC violated Section 69.1.9 of the implementing rules and regulations of the procurement law: “All other acts that tend to defeat the purpose of the competitive bidding, such as habitually withdrawing from bidding, submitting late bids or patently insufficient bid.”

The ban was originally for a period of one year, but was reduced to 6 months after the company filed a motion for consideration.

In 2003, the Bureau of Internal Revenue also hunted down the local subsidiary of CSCEC.

China State Philippines Construction Engineering Corporation was accused of failing to pay around P712.74 million in taxes from 2003 to 2006.

The Court of Appeals ruled in favor of CSCEC and its subsidiary in 2006.

The two companies are now part of the Bangon Marawi Consortium, a group of Chinese and Filipino companies handpicked by the government to rebuild areas worst hit by last year’s battles.

There was no bidding for the Marawi project, but their designs will be subjected to a Swiss Challenge. (LOOK: Gov’t illustrations of Marawi rehabilitation plan)

Rappler has asked Task Force Bangon Marawi chief Eduardo del Rosario if the government was aware of the companies’ previous blacklisting. He has not yet responded as of posting time. According to previous reports, the group was chosen based on the following criteria: project costs, terms of payment, overall conceptual design, timelines, responsiveness to minimum requirements, and the capacity to undertake the whole project.

Based on the government timeline, the contract will be awarded within the month of May to make way for the groundbreaking ceremony in June. – Rappler.com