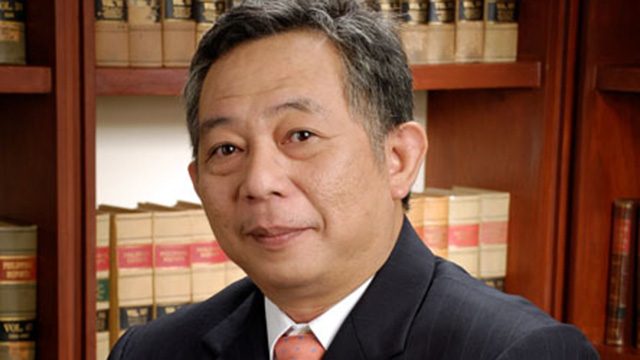 MANILA, Philippines (UPDATED) – “Integrity is the ability to stand by an idea” – Ayn Rand, The Fountainhead.

Associate Justice Alfredo Caguioa began his strongly-worded dissenting opinion against the ouster of Chief Justice Maria Lourdes Sereno with a line borrowed from author Ayn Rand to stress his point about integrity.

The Supreme Court on Friday, May 11, voted 8-6 in favor of the quo warranto petition. Caguioa was one of the 6 justices who dissented.

Caguioa said that by allowing Sereno’s ouster via a route other than impeachment – to him the only way to remove a chief justice – the High Court failed its own “test of integrity.” (READ: DOCUMENT: Dissenting opinion of SC Justice Alfredo Caguioa on quo warranto petition)

“This case marks the time when the Court commits seppuku – without honor,” Caguioa wrote. In effect, it committed suicide without restoring the honor that seppuku or hara-kiri intends.

Cracks in the SC

Exposing the internal squabbles inside the once secretive Supreme Court, Caguioa said, is a “disservice to the institution”.

Several justices led by Associate Justice Teresita de Castro  appeared before the House justice committee in November 2017 to air their grievances against the Chief Justice. The committee at the time was hearing an impeachment complaint lodged against Sereno and De Castro’s appearance as one of the witnesses against her was described as “unprecedented”.

Caguioa wrote: “The Court’s inability to resolve this leadership issue within its own walls and the need to ventilate these matters before another forum is a disservice to the institution and to the individual members of the Court.”

But the even greater disservice is “for the Court to now turn around and oust the Chief Justice on its own, without any constitutional basis.”

“No matter how dislikable a member of the Court is, the rules cannot be changed just to get rid of him, or her in this case,” Caguioa said.

The associate justice slammed Solicitor General Jose Calida’s “creative” way of stripping Sereno’s powers, using a “road less travelled by.” It was Calida who filed the quo warranto petition with the Court on March 5, 2018 asking it to remove Sereno because her appointment was invalid to begin with.

But Caguioa was quick to point out that “there is a reason why it has never been taken – it is not a sanctioned road.”

He added that “this case is nothing more than cheap trickery couched as some gaudy innovation.”

Caguioa implied that Calida was well aware of “the grounds of impeachment and the improbability of ouster through the mode constitutionally provided,” that is why he resorted to forum shopping.

The quo warranto route is an “institutional attack on the Supreme Court, as it enlists the Court’s participation in the erosion of its own independence through the circumvention of the very document [the constitution] it has been tasked to uphold.”

The majority insisted that The President or Vice President, both of whom are impeachable officers like the Chief Justice, can be unseated through modes other than impeachment, like an election protest or a quo warranto petition.

With this, the majority concluded that the quo warranto petition against Sereno was valid.

Caguioa disagreed because such exception “is specific and narrow, and should not be interpreted in a manner that subverts the entire impeachment mechanism.”

“This interpretation is fundamentally flawed as it puts unwarranted primacy on ‘legal hermeneutics’ at the expense of Constitutional intent,” Caguioa added.

He also warned that the High Court’s move to unseat Sereno without impeachment “would expose each [of the justices] to the pressures of conformity at the risk of removal.” It will be no different from dissenting under threat.

Caguioa also explained and defended the actions of the Judicial and Bar Council (JBC) to allow Sereno to undergo the screening process for the Chief Justice post. It is the JBC that screens nominations and applications to the Supreme Court and other judicial posts.

He said that although the Supreme Court has supervisory authority over the JBC, it had no jurisdiction over the rules promulgated by the body.

The requirements for chief justice include the following:

The first 3 requirements are easy to comply with, but the fourth criterion can be quite contentious and subjective. This is where the JBC’s judgment comes in.

The JBC has laid out several criteria and operational definitions for each. The body did not require the submission of Statements of Assets, Liabilities, and Net Worth (SALN) as proof of integrity, and instead used interviews and background checks as a measure.

Moreover, the JBC accepted Sereno’s explanation that her SALNs were “irretrievable.”

Caguioa said the Supreme Court crossed the line by claiming that Sereno lacked integrity for questioning the JBC’s decision and insisting on her ouster based on Sereno’s missing SALNs.

However, Caguioa made it clear he was not downplaying the role of SALNs in determining integrity. But he said that the use of SALNs as a measure of integrity must be put in proper context.

He went on to differentiate the case of Sereno and former Chief Justice Renato Corona. While Sereno simply lost or misplaced her SALNs, Corona had “undeclared dollar and peso deposits which were manifestly out of proportion to his lawful income and he failed to provide any explanation on how he obtained such funds.”

“[The] SALN requirement delved into the real issue of curtailing the acquisition of unexplained wealth,” Caguioa said.  – Rappler.com