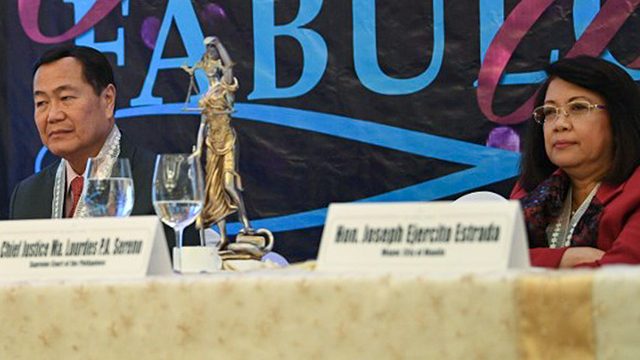 MANILA, Philippines – It seemed like a relatively minor issue during the House of Representatives hearing – some of the Statements of Assets, Liabilities and Net Worth (SALNs) of ousted Chief Justice Maria Lourdes Sereno from when she was a professor at the University of the Philippines (UP) could not be found.

But in the end, that issue got her removed from the Supreme Court (SC) in a tight voting of 8-6.

How the justices voted revealed a lot about the internal dynamics inside the Court, and how those in constitutionalist group remained faithful to their views despite their difference of opinion with Sereno.

Carpio is one of the 6 dissenters who voted to dismiss the quo warranto petition for being the improper way to remove a chief justice.

But SC Spokesman Theodore Te said in a news conference on Friday, May 11, that Carpio switched sides on a separate voting.

On whether or not Sereno violated the Constitution and the law for failure to file SALNs, the vote became 9-0, with Carpio joining the majority and the other 5 not offering an opinion.

In his dissenting opinion, Carpio makes a strong statement that not only did Sereno allegedly fail to file her SALNs, she also committed an impeachable offense because of it.

Carpio said that when Solicitor General Jose Calida submitted UP certifications that some SALNs were not on file, Calida was able to provide a prima facie evidence that Sereno failed to file her SALNs.

The burden of proof then shifted to Sereno to prove otherwise.

“[Sereno] conveniently alleges that she religiously filed her SALNs without presenting any evidence to prove such allegation. Suffice to state, mere allegation is not proof. This means that the prima facie evidence establishing respondent’s repeated failure to file her SALNs remains uncontradicted, and thus, respondent can be held liable for her repeated non-filing of SALNs while she was employed as a UP College of Law Professor,” Carpio said.

Carpio added: “In light of her previous failure to file her SALNs for several years while she was a UP College of Law Professor, her failure to file her SALN upon assuming office in 2010 as Associate Justice of this Court constitutes culpable violation of the Constitution, a violation committed while she was already serving as an impeachable officer.”

This is echoed in the majority decision written by Associate Justice Noel Tijam, which practically gives Sereno no out in her ouster.

One of the dissenters, Associate Justice Estela Perlas-Bernabe, also noted that Sereno’s defense of why some of her SALNs are missing does not entirely check out.

Bernabe noted in her dissenting opinion that “the facts on record and respondent’s statements cast shadows of doubt on her claim that she indeed faithfully filed all her SALNs in full compliance with the law.”

Bernabe dissented to the main petition because she argued that it is not for the Supreme Court, but for the Judicial and Bar Council (JBC) to determine if the SALN issue also means Sereno violated the integrity requirement.

“There is no denying that fraudulent misrepresentation is indeed a serious ethical violation. However, until this allegation is threshed out in the proper forum, the JBC’s determination on respondent’s integrity ought to prevail,” Bernabe said.

Associate Justice Marvic Leonen called the majority decision a “legal abomination.” But like Carpio and Bernabe, he made sure he did not absolve Sereno of all faults.

Te said that Leonen, as well as Bernabe, Associate Justices Presbitero Velasco Jr, Mariano del Castillo, and Benjamin Caguioa did not offer an opinion on whether or not Sereno violated the SALN law.

Still, Leonen wrote in his dissenting opinion, “She may have created too much of a political narrative which elided her own accountability and backgrounded her responsibilities as a member of this Court.”

Sereno, Carpio, Bernabe, and Leonen make up the constitutionalist group. They comprise  the bloc whose decisions tend to be the same, extremely constitutionalist, and fiercely faithful to the 1987 Charter.

Almost always, Caguioa joins them in this voting pattern. Sometimes, Associate Justice Francis Jardeleza too. But Jardeleza and Sereno have a long and painful history that his vote for the ouster was not entirely surprising.

“No matter how dislikable a member of the Court is, the rules cannot be changed just to get rid of him, or her in this case,” Caguioa said in his dissenting opinion.

Sereno has not responded to the issues raised in the decision and separate opinions, including the findings of the SC majority that she may also be disbarred for violating sub judice. – Rappler.com