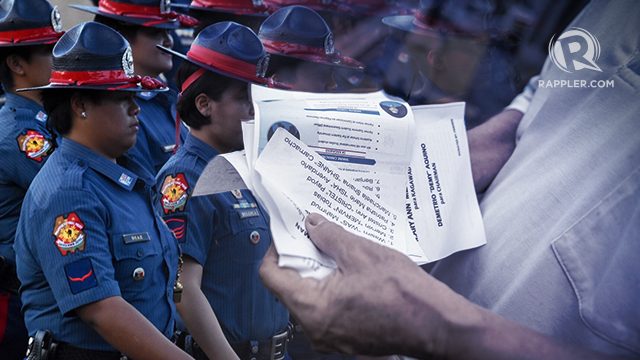 The Commission on Elections (Comelec) had made that clear as soon as polls opened for the barangay and Sangguniang Kabataan elections on Monday, May 14. Months before that, the poll body had made public a list of all the bans in place during certain phases of the election period – campaigning should end a day before election day.

This warning was repeated by Comelec Commissioner Rowena Guanzon in an afternoon briefing the same day, saying that candidates themselves were liable for their published materials.

By the end of the day, Comelec officers did not need to look far to see that the reminders were left unheeded.

The entrances of voting precincts were littered with campaign leaflets and sample ballots. (READ: Payatas kids see treasure in the trash of barangay, SK elections)

Yet, just a few feet away, or sometimes even at the entrances, stood policemen. In Barangay Payatas in Quezon City, for one, cops just ignored candidates’ supporters who handed out campaign materials.

Were the cops remiss of their duties? 1. Cops do not know campaigning is banned

According to Albayalde, some cops did not know that giving out campaign materials was already banned Saturday before election day.

“The cops, some of them do not know that it is prohibited,” Albayalde said in Filipino

He surmised that the cops, especially newbies who are usually the ones doing election monitoring duties, were simply not briefed about the election rules.

Barangay station commanders and the municipal or city police chiefs should have given them a briefing on election protocols.

The top cop cited his experience as Pampanga police chief during the last barangay elections in 2013. He said supporters exploited kids and ordered them to hand out the materials. They used the same strategy this year.

“Usually they use children to distribute materials, so all we can do is confiscate the materials” instead of arresting children, Albayalde lamented.

Cops can bring lawbreaking children to the social welfare department. In practice, they usually just scold children so they would stop. In the end, cops do not apprehend anybody.

Taking children campaigners into custody is also seen as an ineffective deterrent to the adults who exploit them politically in the first place.

As with other criminal offenses, the most effective way to bring election day campaigning is to prevent its top source: the barangay candidates themselves.

The bets, Albayalde said, can only be effectively discouraged with the help of the Comelec and the Department of the Interior and Local Government (DILG).

“The [answer] there really is the Comelec or the DILG. They should be the ones to punish the candidates who keep on distributing election materials, which is a violation of the Election Code,” Albayalde said in a mix of English and Filipino.

Albayalde said the responsibility to apprehend illegal campaigners should be shared with Comelec, which should leave instructions to electoral board members per polling precinct.

“The Comelec should report to us so we confiscate…. I think the Comelec officers inside [the precinct] should inform the cops that it is prohibited,” Albayalde said. – with a report from Michael Bueza/Rappler.com