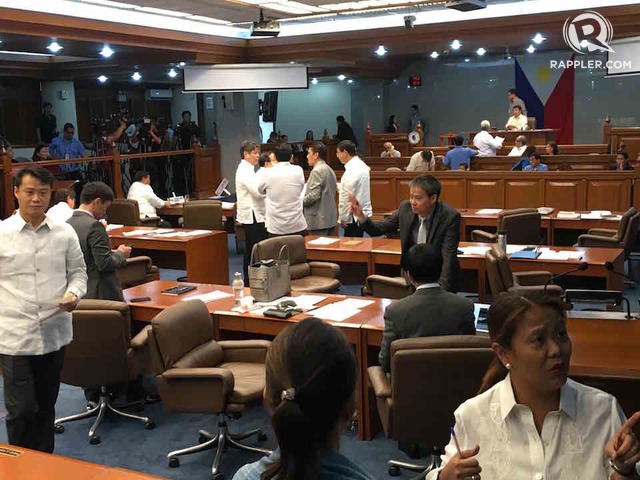 Senate Resolution 738 was filed on Thursday, May 17, with the signatures of the following senators:

The 9 senators who did not sign or were unable to do so include:

The resolution, citing the 1987 Constitution, said the Supreme Court’s decision “sets a dangerous precedent that transgresses the exclusive powers of the legislative branch to initiate, try, and decide all cases of impeachment.”

“A fundamental doctrine of a republican government is the separation of powers of the executive, legislative, and judicial branches of government; and while this doctrine does not guarantee absolute autonomy in the discharge of functions of each branch, the corollary doctrine of checks and balances ensures their co-equality,” the resolution said.

“The Senate recognizes that the continued harmonious interdependence of these branches lies in the faithful adherence of each branch of government to the Constitution,” it added.

The Senate has to vote on the measure before it becomes the official stand of the chamber.

While the resolution was the minority bloc’s initiative, opposition senators said the issue is now beyond party lines as it already involves the Constitution.

Drilon earlier said that the resolution is meant “to inform the Supreme Court of the sentiment of the Senate insofar as the legal issue is concerned.”

Constitutional law experts, however, say that the Senate could only assert its jurisdiction by filing a petition before the Supreme Court, and not by passing a resolution.

Pimentel earlier said the Senate’s hands are tied in the impeachment, as the House has yet to transmit to them the articles of impeachment.

House leaders, meanwhile, said they would wait for the final SC decision, since Sereno is expected to appeal the ruling, before holding a plenary vote on the articles of impeachment.

SC justices who voted against the quo warranto petition had also argued that the High Court’s decision set a bad precedent. In his dissenting opinion, Associate Justice Alfredo Caguioa likened the 8-6 Court vote as committing “seppuku,” while Associate Justice Marvic Leonen said the ruling had made the SC “vulnerable.” – Rappler.com