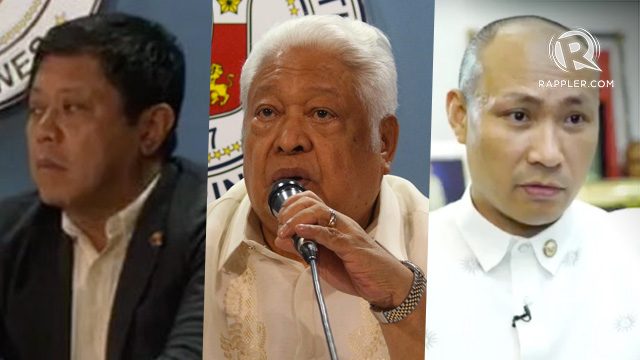 Their planned impeachment complaint against members of the High Court come days after the SC voted 8-6 to grant the quo warrantp petition nullifying Sereno’s appointment.

In a statement on Friday, May 18, Lagman said “immutable rule is that injustice does not pay.”

“If magistrates who are sworn to uphold the Constitution subvert the very fundamental law by arrogating jurisdiction over an impeachable official, perforce they deserve to be impeached,” Lagman said.

He said the 8 justices are “liable” of culpable violation of the Constitution and betrayal of public trust for agreeing to remove Sereno via quo warranto.

The 1987 Constitution only allows the removal of impeachable officials like the chief jusice through impeachment by the House of Representatives then conviction by the Senate, sitting as an impeachment court.

“No other procedure is allowed, certainly not an aberration of a quo warranto action,” said Lagman.

In a press conference on Tuesday, May 22, Lagman said they will file the impeachment complaints if the High Court will junk the motion for reconsideration Sereno plans to file.

The Magdalo party list of Alejano, who previously filed the failed impeachment complaint against President Rodrigo Duterte, believes impeaching the 8 justices is the best course to save the  judiciary’s integrity.

“We strongly believe that the filing of impeachment complaints against the justices is the only viable remedy to correct this mistake and save the integrity of the Supreme Court before the Filipino people,” said Magdalo in a statement.

“As opposed to what the justices had exercised, we want to follow the legal way based on what is provided for in the Constitution,” the statement added.

“This plot to file an impeachment complaint against the 8 justices will gain ground in the next few days because I believe civil society groups, even lawyers’ groups, and those from the private sector will also support this move,” Villarin said during the Serye forum on Thursday, May 17.

A majority of lawmakers in the House, however, are supporters of Duterte, who had publicly declared  Sereno as his “enemy” and told Congress to fast-track the impeachment complaint against her.

The House justice panel also approved the articles of impeachment against Sereno after holding months-long hearings.

It was during these hearings, as well as during the oral arguments, when the other justices’ true sentiments against Sereno where publicized, prompting the then Chief Justice to seek their inhibition in the quo warranto case. (READ: Sereno wants ‘faith-shaming’ SC justice to inhibit in quo warranto case)

On Thursday, Sereno herself challenged Duterte to resign and slammed the President’s pivot towards China. – Rappler.com