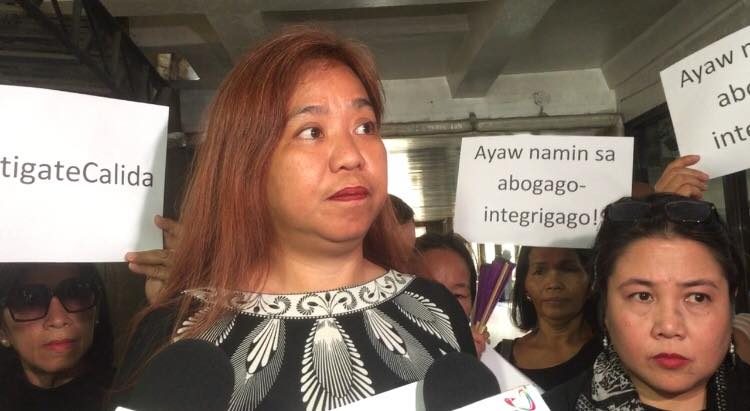 MANILA, Philippines (UPDATED) – Jocelyn Acosta of the cause-oriented group, The Silent Majority, has become the bane of Solicitor General Jose Calida, and she’s not letting up.

Acosta’s group supported the Mar Roxas-Leni Robredo campaign in 2016. The Silent Majority is part of the anti-Duterte coalition Tindig Pilipinas.

Acosta said on Friday, May 18, that “disbarment is definitely an option” against Calida, on the basis of an alleged illcit affair and questions about a family-owned security agency.

“If Calida doesn’t hold up under scrutiny, whether it’s because of the relationship or his SALNs, then definitely disbarment is an option,” Acosta said on Friday in front of the Office of the Solicitor General (OSG) in Makati.

Acosta had earlier accused Calida of having an affair with an OSG intern. This accusation was contained in a graft and malversation complaint that Acosta filed against Calida before the Office of the Ombudsman on May 10.

The Integrated Bar of the Philippines (IBP) and the Supreme Court (SC) have disbarred lawyers before for having extramarital affairs.

Based on past cases, rules cited were:

All of these grounds were used by the SC when it disbarred former Philippine Basketball Association (PBA) commissioner Jose Emmanuel “Noli” Eala because of an illicit affair with a married woman.

Acosta was at the OSG on Friday to publicly demand from Calida copies of his Statements of Assets, Liabilities, and Net Worth (SALN) to check whether he had declared or divested from family-owned security firm Vigilant Investigative and Security Agency Inc (VISAI).

VISAI has contracts with at least 4 government agencies, said Acosta. A 2016 contract with the National Anti-Poverty Commission (NAPC) shows the firm’s chairperson and president is Calida’s wife Milagros.

Acosta said Calida owns 60% of VISAI, while the rest is shared among his wife and children.

“Being the architect of the quo warranto petition, you now have the burden of showing to the people that you have more integrity than the Chief Justice. We hereby demand for your SALNs for the years 2016, 2017 and 2018 so the people may see that you have accurately declared your family’s ownership of VISAI, among other assets,” Acosta said in a letter which was received by the OSG on Friday.

Acosta also dared Calida to just resign “if our investigation shows that he has no integrity because we need a solicitor general who has an unimpeachable integrity,” Acosta said. Before these controversies, Calida had been rumored to be a front-runner for the Ombudsman post which will be vacated by Conchita Carpio Morales on July 26.

Three well-placed sources said that the Judicial and Bar Council’s (JBC’s) list of applicants for Ombudsman does not include Calida. Applications have closed.

“That’s a good development. I think it shows people that if we do act, we can make an impact,” Acosta said.

Meanwhile, Calida also faces questions of conflict of interest in moves to abolish the Presidential Commission on Good Government (PCGG) and transfer its powers to the OSG.

The PCGG is mandated to run after the ill-gotten wealth of the Marcoses. Calida is a Marcos loyalist. – Rappler.com