MANILA, Philippines – A mayor of Lanao del Norte province who was arrested for possession of high-powered firearms has been released to the custody of an adviser of President Rodrigo Duterte.

The military released Pantar Mayor Jabar Tago after Secretary Abdullah Mama-o, Presidential Adviser on Overseas Filipino Workers and Muslm Concerns, prevailed upon the military to give him custody of the local chief executive who was arrested on May 13.

Based on documents shared with reporters, Mama-o wrote the military on May 14 to make the demand. “It’s okay with me if only the mayor, Jabar D. Tago, will be released under my custody. The other detainees prefer to be detained by the military in Iligan City,” Mama-o wrote. 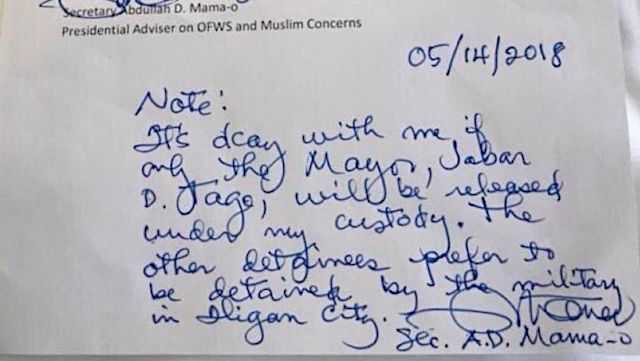 A day later, May 15, Tago and 5 of his companions were released to Mama;s representative.

Rappler verified the veracity of documents from reliable sources privy to what happened. The documents are posted below.

Why is this important? The release of Tago raises questions about the military’s power in Mindanao, which is under martial law.

How much power do generals hold over their areas of responsibility? Do politicians bow to the military or is it the other way around?

In this case, the military yielded to a politician. It’s a precedent that could affect how politicians perceive the military and the morale of troops implementing a crackdown on illegal firearms.

Major General Rosseler Murillo, commander of the 1st Infantry Division, told the Philippine Daily Inquirer: “They were released because they could be detained only for 36 hours [in the absence of charges]. We will resort to the regular filing [of cases through the prosecutor’s office].”

What happened before? Tago and his men figured in a brief firefight with the military a day before the barangay polls, May 13, when troops were going to raid 3 locations where high-powered firearms were being kept, based on intelligence reports.

A source said it didn’t surprise the troops anymore to find the mayor in one of the locations.

A cache of weapons – 9 high-powered firearms, 5 pistols, a shotgun, and assorted ammunition – were found after the firefight, Colonel Romeo Brawner, spokesman of the 1st Infantry Division, told reporters on May 14.

The mayor and 6 others were arrested for violation of Republic Act 10591 or the Comprehensive Firearms and Ammunition Regulation Act.

The operation was launched days after election violence was reported in the area, according to Rappler sources. The military acted on an intelligence report without a search warrant, which is allowed under martial law.

The troops knew what they were up against so they brought armored vehicles with them.

Rappler learned Mama-o made repeated requests to the military as early as Sunday, May 13, but he was ignored. On Monday, May 14, the military confirmed the mayor’s arrest.

Mama-o didn’t give up. Later on Monday, he wrote Murillo a letter formally seeking to take custody of 3 of 6 people arrested on Sunday, including the mayor.

“This shall serve as formal request that the foregoing parties be released under my custody while their case is being investigated. I assure you that they will cooperate with the military and the police should there be any investigation scheduled for their appearance,” Mama-o said in the letter.

“I am taking personal responsibility of their appearance for such investigations,” Mama-o said. The handwritten note was on the same request letter.

A day later, Tago and 5 others were released to the custody Mama-o’s representative,   lawyer Nur Jaypha Bacaraman-Asum.

Mama-o has yet to respond to Rappler’s request for his side of the story, as of posting.

Who is Mayor Jabar Tago? Tago became the mayor of Pantar town only 4 months ago, after the Commission on Elections declared him the real winner for vice mayor in the 2016 elections.

This made him the rightful successor of the late Mayor Exchan Limbona, who was killed in an ambush on December 29, 2017.