Soldiers who fought in Marawi promoted one rank higher 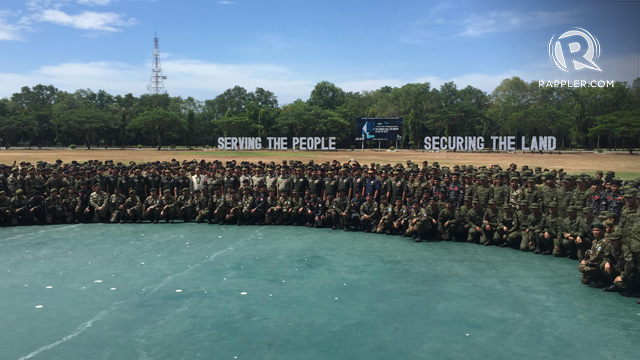 MANILA, Philippines (UPDATED) – Over 600 soldiers who fought during the Marawi siege were promoted a rank higher on Tuesday, May 22, nearly a year since war erupted in the country’s only Islamic City. (Marawi: 153 days and more)

(You put your life on the line and you did not fail your country all in the name of service. I hope that if the time comes again when our country needs your helps, you will not hestitate or waver to give all, even your own lives for the country.)

Luna added, “I know the daunting challenges that you have grappled with day in and day out while you were in Marawi, including the uncertainty of returning home safe from deployment and being in the arms of your families again. I admire your courage for having fought with such challenges while you also endured and fought the physical war.”

This is the first batch of 4,252 soldiers involved in the war to be promoted in rank.

Aside from the soldiers who fought in Maraw,i 4 colonels were also promoted to the rank of brigadier general under regular promotion orders:

Government troops and Islamic State (ISIS)-linked terrorists clashed in Marawi City on May 23, 2017. It prompted the declaration of martial law in Mindanao which remained in effect to this day, even after Marawi was declared liberated from terrorist influence in October last year. (Marawi in 360: Inside the War Zone)

According to army figures , 12,186 troops were deployed to Marawi City, and of this number, 12,015 survived the 5-month war – the longest and bloodiest Philippine military operation after World War II.  (Heroes of Marawi: List of soldiers, cops killed in action) – Rappler.com