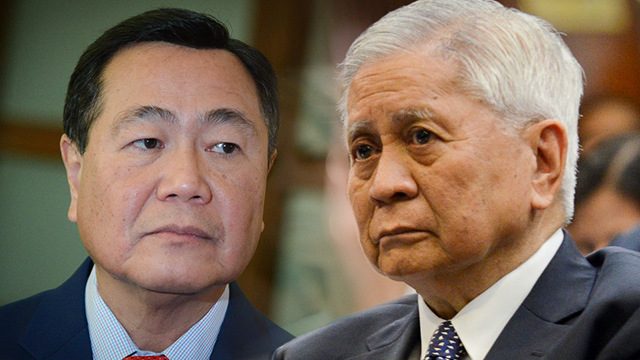 MANILA, Philippines – Two stalwarts of the Philippines’ case against China urged the Philippine government to file a diplomatic protest against the landing of Chinese bombers in the South China Sea.

In a statement on Monday, May 21, Acting Chief Justice Antonio Carpio said, “Failure to formally protest means the Philippines is acquiescing or consenting to the militarization, and worse, to the claim of China that all the islands, waters, and resources within the 9-dash line form part of Chinese territory.”

Carpio was one of the legal minds behind the case that the Philippines won against China on July 12, 2016.

It was under Del Rosario’s leadership that Manila filed a case against Beijing. (READ: ‘Del Rosario diplomacy’ hailed amid PH victory)

“I fully agree with the aforementioned suggestions and trust that many others will share the same sentiment,” Del Rosario said in a separate statement.

Carpio and Del Rosario issued their statements as the Philippine Department of Foreign Affairs (DFA) chooses not to publicly condemn China over its bombers in the South China Sea.

‘Meek and humble’ before Xi Jinping

The bombers recently landed on the South China Sea’s Paracel Islands, which is claimed by Vietnam but not the Philippines.

Nearly all of the Philippines, however, “falls within the radius of the bombers,” said the Asia Maritime Transparency Initiative of the Washington-based Center for Strategic and International Studies. (READ: Robredo alarmed over Chinese bombers in South China Sea)

Unlike the Philippines, Vietnam on Monday condemned these bombers in the South China Sea.

Philippine Foreign Secretary Alan Peter Cayetano earlier said that it is no longer the Philippines’ strategy to always file diplomatic protests against China, as the DFA did under Del Rosario.

Duterte earlier stressed the need to “remain meek and humble” to receive the “mercy” of the likes of Chinese President Xi Jinping. He also said Xi vowed to protect him from any plan to remove him from office.

Carpio, however, said the Philippines should not fall prey to China’s “Three-Warfare Strategy to control the South China Sea for economic and military purposes.”

He said that under this strategy, China wants to “intimidate into submission other claimant states, including the Philippines,” to accept the 9-dash line used by China to claim the entire South China Sea.

He said China pursues this intimidation by constructing “huge air and naval bases” and introducing “nuclear-armed strategic bombers” there.

He added that “any self-respecting sovereign state will formally protest such encroachment on its sovereignty and sovereign rights.”

He also urged the Philippines to “coordinate with other claimant states,” among others, “in resisting China’s militarization of the South China Sea.”

“Failure to coordinate, and to harness world opinion to support the arbitral ruling, will be handing over to China on a silver platter the West Philippine Sea,” Carpio said.

Reacting to Carpio’s suggestion, Presidential Spokesperson Harry Roque said on Tuesday, May 22, “Let me just say that just because we have not said anything to that regard does not mean we are not doing anything.”

He also said “that possibility is there, that we’re working quietly with our ASEAN neighbors especially those with similar claims.”

In his own statement, Del Rosario urged Filipinos to “speak loudly, clearly, and with one voice in promoting our national security.” (READ: [OPINION] On the South China Sea: Let us help our President)

He also said the Duterte administration should revisit its foreign policy.

“Our government needs to listen to its people,” Del Rosario said.

“As we had previously said, we are opposed to war – as we should be. But if threatened by the use of force, we should be ready to inflict, at the very least, a bloody nose on any attacker who is out to harm us,” Del Rosario said.

To drive home his point, he cited a possible acquisition by the Armed Forces of the Philippines (AFP) from India.

“For example, it is my understanding that this capacity, which may be delivered by Bramos Missiles, may be acquired by our AFP from India and would be a good starting point,” he said.

Del Rosario noted that “the President believes, however, that those of us who endeavor to speak in the spirit of being helpful are not prepared to sacrifice ourselves.”

He then asked the Philippines’ leaders “to have more confidence in our people.”

“To support our President, to secure our nation and to ensure the future of all Filipinos, it must be believed that indeed there are those of us who are prepared to make the supreme sacrifice for our country, especially when called upon,” Del Rosario said.

“Finally, all of us want to be helpful; all of us must be helpful. Let us, therefore, respectfully convey to our President that we eagerly await his inspirational leadership by doing what is right,” the Philippines’ former top diplomat added. – Rappler.com