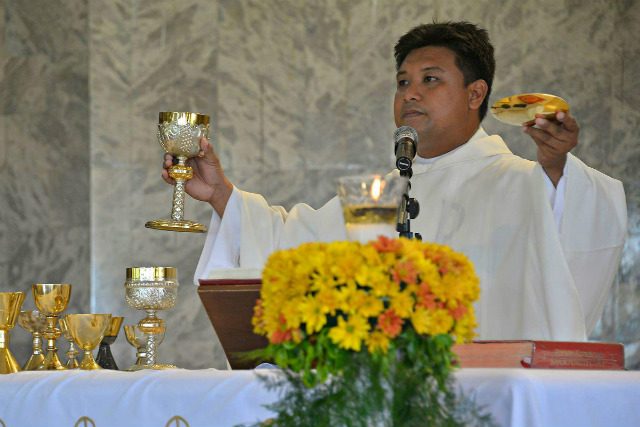 Utleg made the statement as President Rodrigo Duterte justified Ventura’s murder by alleging that the priest had illicit affairs.

“Obviously, he had enemies. We do not know who they are or why they had to kill him,” Utleg said in a statement sent to Rappler on Tuesday, May 22.

“The police is investigating the killing from all angles. We do not want to speculate on what the reasons are for his death. Neither do we want that the investigation be muddled by the spreading of unfounded rumors and malicious insinuations,” Utleg said.

The bishop also said he trusts that the Philippine National Police “is faithfully doing its job.”

“We wish them success, to come out with solid evidence, to apprehend the killers and determine the mastermind. We hope and pray that the real truth will come out so that justice for Fr Mark will finally be served,” Utleg added.

Quoting the Gospel of John, he said, “The truth will set us free.”

Duterte first linked Ventura to supposed illicit affairs in a speech in Tabogon, Cebu, on Sunday afternoon. The President did this by showing a matrix of the priest’s alleged affairs with at least 4 women.

Duterte did not name the priest, but showed the cover page of the matrix, with the title, “Shooting to Death of Father Mark Anthony Ventura.”

It is unclear how the matrix on Ventura was produced. Previous matrices presented by the President were later found erroneous.

Presidential Spokesperson Harry Roque confirmed on Tuesday that Duterte was referring to Ventura.

Ventura, 37, was shot dead by riding-in-tandem killers as he was blessing children after a Mass in Gattaran, Cagayan, on April 29.

Utleg on Tuesday described Ventura as “a dedicated priest, a zealous pastor, a missionary to the ‘peripheries.'” He earlier said Ventura even requested to serve as a missionary in remote areas of Cagayan.

“He was beloved by all who knew him. He was an affectionate person, sympathetic, close and intimate to many people: rich and poor, men and women, young and old. We will miss his infectious smile and untiring zeal,” Utleg said.

Caloocan Bishop Pablo Virgilio David earlier stressed the need to seek justice for Ventura, even as Duterte accused the priest of womanizing.

“Murder is murder, whatever the motive for it may have been,” David said on Sunday, May 20.

“I will hold on to the words of the archbishop, priests, and lay people of Tuguegarao who have vouched for the integrity of Fr Mark,” David added.

A priest for almost 7 years, Ventura was “known for his anti-mining advocacies and for helping indigenous peoples in the province,” said the news service of the Catholic Bishops’ Conference of the Philippines.

Ventura was the second priest to be killed in the Philippines in a span of 4 months.