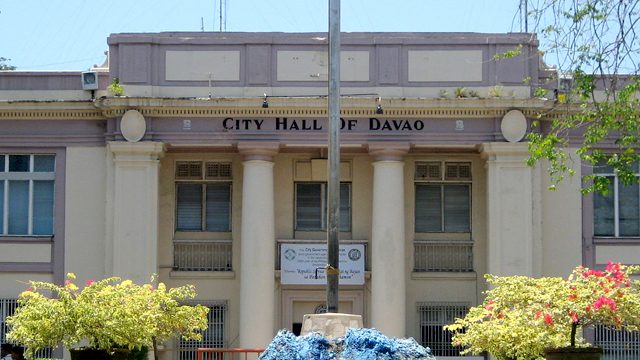 MANILA, Philippines (UPDATED) – The Commission on Audit (COA) has raised several red flags over Davao City’s finances in 2017, noting that P569.855 million worth of spending and accounts lacked supporting documents.

The state auditors’ observations – that the transactions were not transparent and their validity was doubtful – are included in the report on President Rodrigo Duterte’s home city published on the COA website recently.

They made strongly-worded observations regarding the following:

In the 4 items questioned, the COA was most explicit with the P69 million worth of infrastructure projects, saying the lack of information was “inconsistent with the government’s commitment to promote transparency of activities in the procurement process as provided by the procurement law.”

Republic Act 9184 or the government procurement act states clear-cut guidelines in each step of procurement, some of which were not taken by the Davao City government, according to COA.

Under the rules, the procuring entity – in this case, the local government – should hold a pre-procurement conference to determine their readiness, meaning their ability to carry out the legal, technical, and financial requirements of the project.

“We observed, however, that the Minutes of Bids and Awards Committee (BAC) meetings, particularly the pre-procurement conferences, have no relevant information as to the discussion of the readiness of the procurement,” the COA said.

The COA noted that some of the constructions were later suspended due to different circumstances, like transfer of location and demolition in the concerned areas. (READ: COA: Davao City spent only 11% of P175M flood control funds in 2012)

“They could have been avoided when properly addressed during deliberations with management officials and the implementing offices for the projects, to arrive at decisions advantageous to the government,” the COA said.

In its response to the audit team, the Davao City government said they “substantially complied” with the rules, but “may have erred in their style of preparing the minutes of the pre-procurement conferences, which were expressed in generic terms.”

In 2017, the city government bought drugs and medicines worth P476,102, but they lacked appropriate documentary requirements, according to COA.

It’s the transaction of the least amount, but this is also where COA was explicit in saying the city government violated RA 9184 and even a COA circular, “thereby casting doubt on the validity of the transactions.”

Some purchases did not have the required Certificate of Product Registration (CPR) from the Food and Drug Administration (FDA), contrary to the procurement law and a COA circular on purchasing medicines.

Though the amount was under a million pesos, the COA stressed that the non-compliance in this purchase was concerning because it had medical and health implications.

“Had the BAC exercised due care in examining the legal documents such as certificates of product registration, the irregular transaction as well as the medical and/or health risks associated with buying unregistered drugs and medicines could have been prevented,” COA said.

The city government’s explanation to COA for the conflicting expiry dates goes as such: “The management relied on the details provided as per delivery/sales invoice in receiving the items delivered by the supplier. Upon compliance of necessary documents to facilitate payment, this office requested the latter to submit the required documents, which are to be attached to the voucher, hence the pharmacist’s certification containing conflicting details from that of the invoice previously issued was received.”

Another strongly-worded observation from COA pertained to the city government’s purchase of P13.5 million worth of equipment for public elementary and secondary schools. These were air-conditioning units, computers, printers, sand other computer software.

The COA said the Local School Board (LSB) did not specify the names of the beneficiary schools, therefore making it difficult for auditors to assess the cost-efficiency of the project, which aimed to air-condition congested e-classrooms.

The COA said there was also no document called Acknowledgment Receipt for Equipment or ARE, which serves as proof that the beneficiary school received the equipment. (READ: COA: Davao City public schools misused P46M in 2014)

“This deficiency encourages a higher susceptibility to bias if the selection of beneficiaries happens only during the implementation stage,” the COA said.

More concerning, the COA said, was this: “The lack of documentation might also indicate misappropriation of property.”

In the P92 million worth of IT equipment, the COA said there was no proof yet that the equipment had been delivered.

“Confirmation letters, dated January 12, 2018, were sent to validate the receipt of the items by the concerned school principals and property custodians but no reply has been received until now,” the COA said.

More than P600,000 worth of software, which were intended for 7 public schools in Davao City, were instead delivered to the Department of Education (DepEd) Regional Office XI, “thus depriving the intended beneficiaries the use of needed IT equipment and software.”

The local government had told COA it would adhere to the recommendations.

But COA said: “Considering that there is no revised program design to justify the change of beneficiaries, the non-delivery of equipment to the intended beneficiaries may be questioned.”

Finally, there was P486 million worth of supplies and materials that appeared on the inventory of the city government as of December 2017.

The COA said the items on the inventory “are of doubtful validity since non-existing items were still carried in the books of the city government of Davao due to lack of support documents.”

The COA said that local governments are mandated to do a periodic physical count of their supplies. This is done to validate the government’s assertion that the assets still exist. The local government is also required to consolidate requisition and issue slips, and put them into a summary called the SSMI or summary of supplies and materials issued.

“Our examination showed that both procedures were not faithfully complied with…our examination of records showed that the local government unit’s failure to strictly comply with the required procedures greatly affected the reliability of the reported balances of inventory accounts,” said COA.

A factor that contributed to the doubt was that some items were food supplies. There was an account, worth P12.78 million as of December 2017, whose food supplies amounting to P11.8 million or 93% of the fund were bought from 2010 to 2016.

“Considering the perishable nature of food items, it is unbelievable that these are still on hand. In fact, it was confirmed from the offices concerned that these food items were already consumed,” the COA said.

Same goes for P124 million worth of construction materials, which were already used.

“The foregoing conditions resulted to the overstatement of the Inventory and Equity accounts while understating the corresponding expense accounts, thus affecting the reliability of reported inventory balances in the financial statements,” the COA said.

The city government of Davao said there was already an inventory committee doing physical counts. They also confirmed the observation that some of the items on the inventory had been utilized or consumed.

“[The city government] has submitted to the accounting office the results of the inventory count and certifications to support the request for dropping of non-existing supplies and materials,” according to COA.