One year later, tears flow as Marawi residents pray for the dead Facebook Twitter Copy URL
Copied
Men, women, children break into tears as they pray for relatives killed in the war

MANILA, Philippines – Tears flowed as Marawi residents remembered the dead a year since the siege of Marawi City erupted on May 23, 2017.

Events were lined up a year later on Wednesday, May 23, starting with the activity, “Honoring the Dead”, led by peace adviser Secretary Jesus Dureza.

The residents turned very emotional during one prayer. Men, women, children broke into tears as the Muslim religious leader lamented in his prayer how many innocent civilians were also killed during the war.

“We pray that they are now in a better place,” said Dureza in his speech. “I know some more people are missing and relatives are still looking for them.”

In the same activity, a separate prayer was uttered for the Christian victims of the war. “It still feels like yesterday,” said Marawi Bishop Edwin dela Peña. 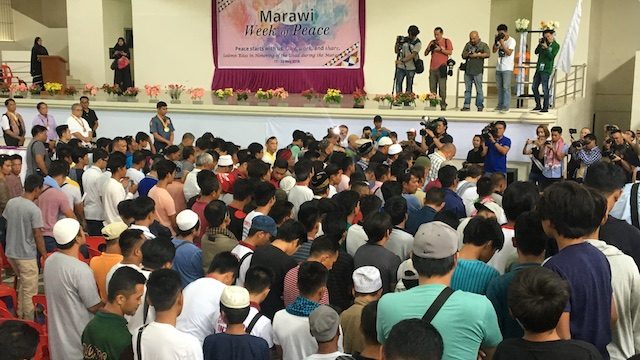 Dureza called on residents to learn the lessons of the war to prevent it from happening again.

White balloons were also released at the end of the two activities.

Over 1,000 were killed in the war waged by armed groups that sought to establish a caliphate in the city, based on government statistics, including 168 security forces. The rest were fighters and civilians. – Rappler.com