Fewer Filipinos expect life to improve in next 12 months – SWS

May 24, 2018 7:09 AM PHT
Paterno Esmaquel II
Facebook Twitter Copy URL
Copied
Fewer Filipinos also remain optimistic that the Philippine economy will get better in 2019, says a survey by the Social Weather Stations 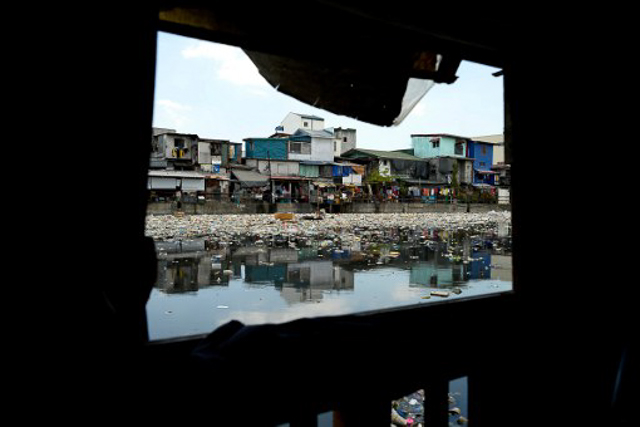 MANILA, Philippines – Fewer Filipinos expect their quality of life to improve in the next 12 months, said the Social Weather Stations (SWS) in a survey released Wednesday, May 23.

The SWS survey showed 46% of adults are “expecting their personal quality of life to improve in the next 12 months (optimists), and 6% expecting it to get worse (pessimists).”

The SWS classified this rating as “excellent.” 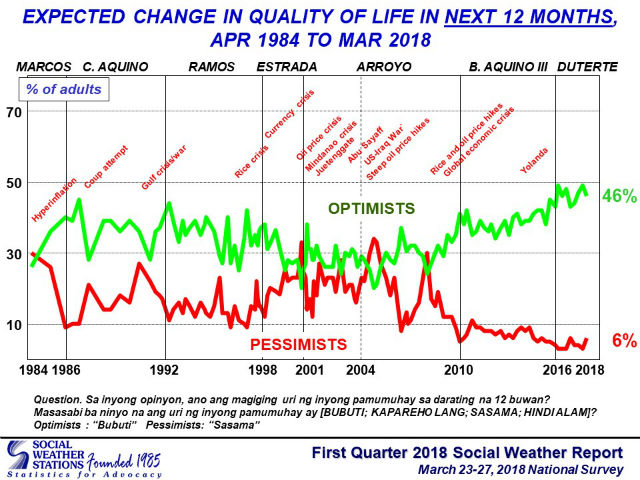 The SWS gathered these findings from its First Quarter 2018 Social Weather Survey from March 23 to 27.

The survey was conducted through face-to-face interviews with 1,200 Filipino adults. The margin of error is ±3% for national percentages.

Optimism about the economy

In the same survey, the SWS found that 42% of Filipinos remain optimistic that the Philippine economy will get better in 2019.

On the other hand, 12% of Filipinos feel it will deterioriate.

This is equivalent to a +31 score for net optimism about the economy. This is 11 points below the excellent +42 in December 2017. 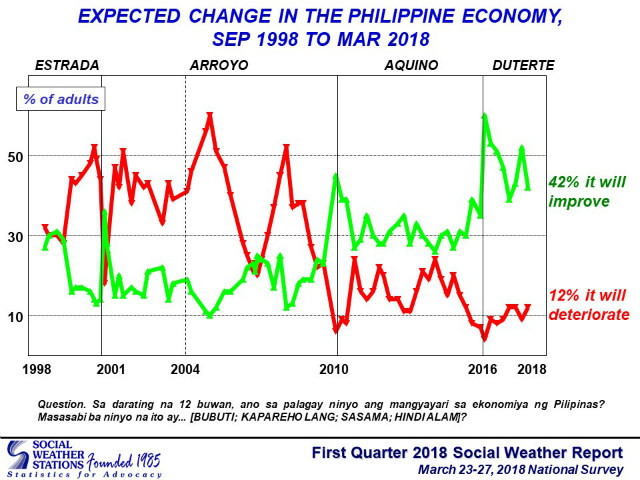 The same survey found that 41% of respondents believed their lives improved compared to 12 months ago, while 21% said their lives worsened.

This is equivalent to a net gainers score of +20, indicating the difference of gainers over losers.

This net gainers score is 3 points below the record-high excellent +23 in December 2017.

The SWS said its questions “about trends in personal quality of life and optimism about the Philippine economy” were non-commissioned. These “are always included on SWS’ own initiative and released as a public service,” the polling firm said. – Rappler.com