Residents to gov’t planners: Build better Marawi for us Facebook Twitter Copy URL
Copied
'If they could improve our water system, sewerage system, and electricity – where our lights are not blinking – we would welcome that. But road expansions? We don’t need that. Our land is not for sale,' says Dr Potre Dirampatan-Diampuan

MANILA, Philippines – Nothing could have prepared 58-year-old Faisa Riga for the life she now lives after the war in Marawi.

Since birth, Riga  lived comfortably in her ancestral house in Marawi, and managed her own canteen to put food on the table for her and only daughter Azisa. When the war broke, they were forced to leave, and life as they knew it changed in an instant.

After struggling to survive with relatives and evacuees in Marawi for almost two months, Riga now works as a household helper in Quiapo, Manila. Meanwhile, 21-year-old Azisa, who was supposed to enter college in June last year, works as a saleslady in an accessories shop in Quiapo.

“What hurts me most is the kind of life we live here now,” Riga said in Filipino. “The things I never had to do in our home in Marawi, I am forced to do now.”

Indeed, many families displaced by the war found themselves “instantly poor” after the siege. Their houses, once filled with hard-earned appliances and furniture, have become now bullet-riddled, some ransacked by looters.  For those displaced by the war and living in temporary shelters or with relatives, their worst fear is not having homes or even lots to return to.

Riga, for one, has no legal land title for the ancestral house that she had inherited. She would have no proof of land ownership to show when the government begins rehabilitation in June.

“The rumor is, Muslims will not get their homes back anymore because Duterte will take them,” Riga told Rappler, claiming she heard this same information from fellow Muslims, and on the internet.

“With Muslims, if the house that you live in is from your ancestors, it is also yours, even without titles,” she added.

This was a common issue for Muslims who gathered in Bahay Nakpil-Bautista in Quiapo, Manila, on Wednesday, May 23 to commemorate the first year of the Marawi siege.

With inter-faith organizations, both Muslims and non-Muslims shared their experiences during the war, and the issues they continued face a year after it broke.

Dr Potre Dirampatan-Diampuan, senior interfaith representative for the Philippines at  United Religious Initiative and a Maranao herself, shared that her family too is burdened by the issue of land ownership as their ancestral house in Marawi, built since 1948, was also inherited without formal titles.

“I know very well who lives on the house on my left, and on my right because their houses were also just as old as ours. Is that not a guarantee? That I know who has lived there? And they know who lives in mine? Can’t we use that?” Diampuan asked.

In a report published by The Asia Foundation in April, planning experts Ica Fernandez, David Garcia, and Assad Baunto noted that this should be a viable option.

“Community-led rehabilitation is about the sharing of knowledge, spaces, and power between government, civilians, and the private sector,” the report said.

“Executing community-led rehabilitation requires deeper representation of traditional leaders and community members in mapmaking, decision-making, and placemaking, across the formal and informal reconstruction mechanisms,” it added.

The experts said that community-generated maps are useful tools for visualizing complex issues in a manner that is inclusive, compelling, and time-saving. They suggest that citizens be supported to draw their own maps, “seeing them not only as passive beneficiaries, but as subject-matter experts in their own right.”

Better Marawi for us, not them 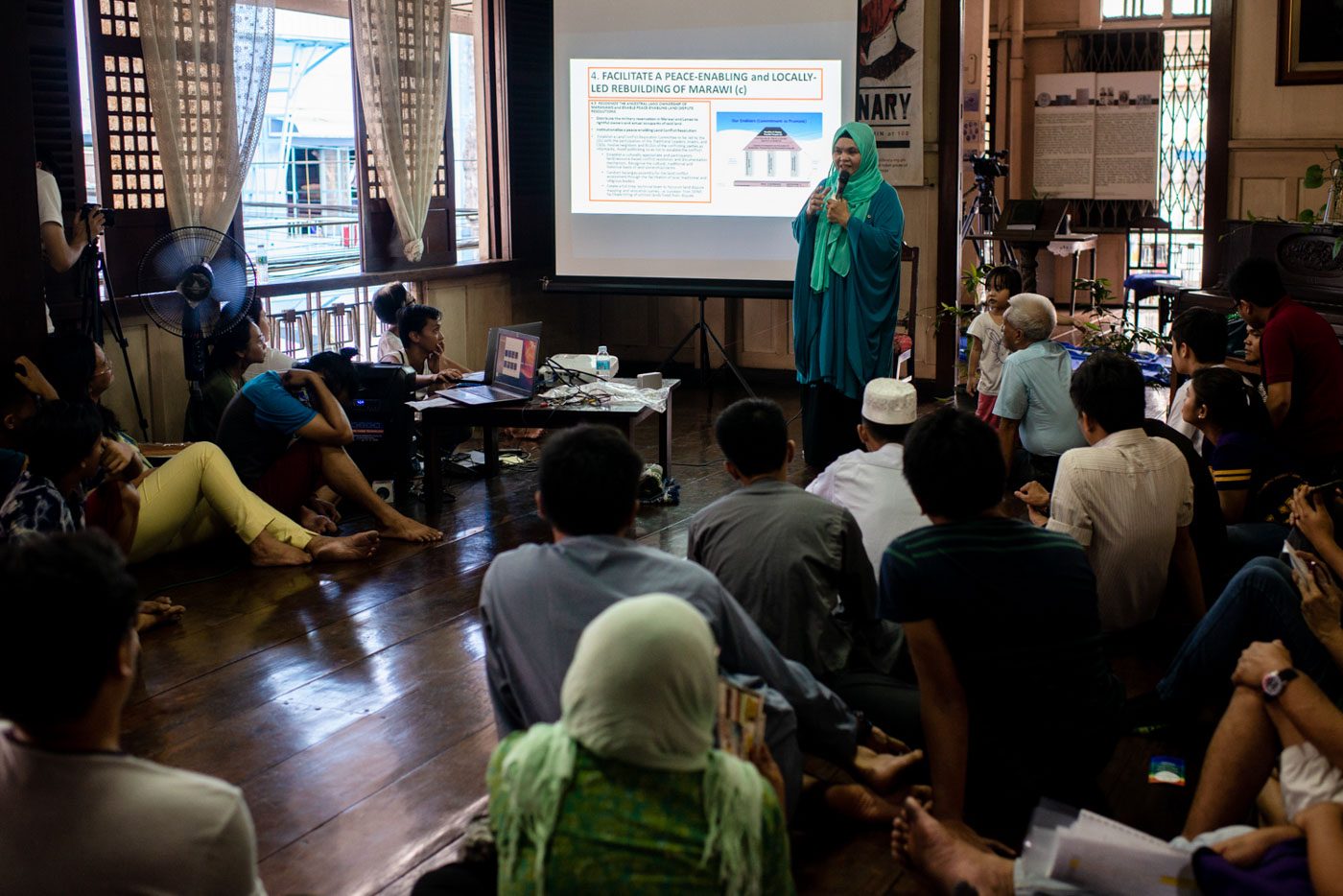 Unfortunately, many Muslims do not feel that the plans for rehabilitation are centered on their own needs.

Since the war broke, the programs for Marawi have focused their slogans and taglines on building a “better” Marawi than ever before. Diampuan said she is unsure if this means better for the residents, or for the planners.

“Improvement and development is relative. We define our own development,” Diampuan said. “If they could improve our water system, sewerage system, and electricity – where our lights are not blinking – we would welcome that. But road expansions? We don’t need that. Our lands are not for sale.”

She said the planners should consider important questions: What’s their culture? What’s their religion? Do they need this at all?

“Do not plan [for Marawi] if you are not from Marawi because you don’t know what we need,” Diampuan said before fellow Maranao.

“If you are going to plan [for Marawi], do not feed the imperial north, or imperial Manila to us from Mindanao. We need different things,” she added.

Diampuan said that the programs for rehabilitation in Marawi should be centered on internally displaced persons (IDPs), culture- and faith-sensitive, inclusive, accountable, and peace-enabling.

She said the residents must be informed where every centavo would go to.

While some of the images sparked interest,  Diampuan noted that planned new Marawi might draw too much tourists. She is concerned the tourists would include girls in bikinis swimming in their lake.

“If they want a new face of Marawi, they should build it somewhere else. Why focus on areas where they’re going to deal with the emotions of people? Nasaktan na nga kami, hihiwain pa (We’ve been hurt already, and yet they want to hurt us even more),” she said.

Duterte should be sorry

Jerome Succor Aba, co-chairperson of Sandugo-Movement of Moro and Indigenous Peoples for Self Determination, said many Muslims in Mindanao used to be “Die-hard Duterte supporters (DDS).” After the siege, however, these people have given the acronym a new meaning – DDS for “Dating (Former) Duterte supporters.”

Aba said they felt betrayed by how Duterte claimed to have Maranao ancestry during the campaign period, only for them to be let down during the Marawi siege.

“If he is really a Maranao, would he let his blood-relatives die, suffer, and crushed by Marawi? If he is Muslim – Muslims feel for their fellow Muslims when they are hurt because we are brothers and sisters – was he even hurt?” Aba asked in Filipino.

Jerome said that the declaration of martial law, which was supposed to to eliminate terrorism in Mindanao, has only made matters worse with more and more armed groups inspired by ISIS forming in Mindanao.

In March, the Armed Forces of the Philippines said it was verifying at least 23 armed groups forming under the name “ISIS Philippines.”

“How come the martial law only made things worse?” Aba asked. “For the first anniversary of the war, our heed is to lift martial law, and justice be given to all the victims of Duterte’s martial law in Mindanao.”  – Rappler.com