May 25, 2018 7:01 PM PHT
Aika Rey
Facebook Twitter Copy URL
Copied
With rising petroleum prices, the government is eyeing to revive a fuel subsidy program – which remains unaudited – for jeepney drivers towards the end of 2018 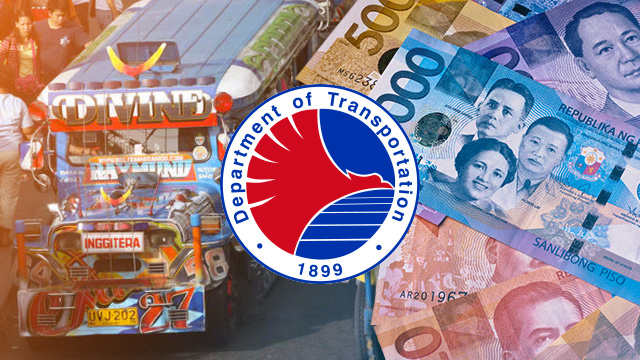 MANILA, Philippines – The Department of Transportation (DOTr) is considering reviving the giving of fuel subsidies to jeepney drivers to cushion the impact of rising fuel prices brought by the tax reform law.

In a text message to Rappler, Transportation Undersecretary Thomas Orbos confirmed that the DOTr will revive the Pantawid Pasada program. (READ: EXPLAINER: How the tax reform law affects Filipino consumers)

“The administration will be giving a financial package to our jeepney drivers to help augment their income especially with rising cost of fuel. Close to a billion pesos have been initially allocated, with succeeding additional funding to be earmarked when necessary,” Orbos said on Friday, May 25.

The planned roll out of the revival of fuel subsidy program will be by the end of the year.

But the past fuel subsidy program, also known as Public Transport Assistance (PTA) program, was hounded by irregularities in its implementation.

Under the Executive Order No. 32 in 2011, the PTA program had an initial funding requirement of P450 million. Some 96,902 cards were supposed to be loaded an initial P1,050 and reloaded with another P1,200 which can be used for fuel.

But the Commission on Audit (COA) flagged irregularities with the implementation, citing in its 2013 report the failure of DOE to submit the status of accomplishment, fund utilization, and fund loading by BPI, and inventory of PTA cards.

George San Mateo, Pinagkaisang Samahan ng mga Tsuper at Operator Nationwide (Piston) head, said that many drivers had received cards that did not have cash in it, or sometimes received it late. Others never received at all.

(In 2011, the cards didn’t have money in it. There was a time that the transfer money was delayed but it was transferred. However, there were drivers whose money were never transferred at all.)

The program remains unaudited according to the 2017 COA report, as DOE has not yet submitted the required documents to COA.

But Orbos said the revived fuel subsidy program will not be used for “political purposes,” alleging that the irregularities in the implementation of the past program was politically motivated.

“[U]nlike the ‘Tawid Pasada’ program of the past, we will not utilize this program for political purposes and want to be sure that said funds are given to actual beneficiaries, hence to drivers who drive franchised vehicles,” he said.

The roll out of the program is said to be done by the end of the year, because of the need for a consolidated database for inventory.

According to transportation officials, there are close to 180,000 jeepney drivers across the Philippines. But the Land Transportation Franchising and Regulatory Board does not have a database on this.

“There will be an actual accountability. Therefore, [there is] the need for an authenticated data base,” he said.

San Mateo said that the Pantawid Pasada program was as good as “alms provided by the government,” that was prone to corruption.

He said, instead, that jeepney operators would prefer a cap pricing of P36 per liter, for a maximum of 30 liters per day, for the sector.

Currently, the cost of diesel in Metro Manila ranges from P40.25 to P51.13 per liter while gasoline is now priced from P48.25 to P62.83 a liter, according to the Department of Energy.

(Our proposal is for every duly franchised jeepney, they should give a special price of P36 of diesel with 30 liters per day. Because the average diesel consumption of jeepneys is 30 liters per day. With this, we don’t need to increase the fares.)

“We will ask the DOF and other government agencies to study the suspension of excise taxes on fuel because it affects the nonstop increase of petroleum products,” Poe said in hearing in Iloilo on Friday.

However, Orbos acknowledged that the subsidy program was only a “stop-gap” measure. He noted that the modernized jeepneys will be able to catch up with the rising fuel prices because of more efficient fuel use.

He said that current jeepney models consume a liter of fuel per 5 kilometers while the new models can cover 8 to 10 kilometers per liter. (IN PHOTOS: How new jeepneys, buses, tricycles could look like)

“That is why we are steadfastly focused on pursuing our PUV Modernization program at the soonest possible time….[It] is a more substantial buffer to any future price increase and [brings] more profitability for this very important transport sector,” he said.

The modernization plan aims to replace all PUVs aged 15 years and older with environment-friendly vehicles that have safety features.

These vehicles must have Euro 4 engines or higher, and doors must be on the side. (READ: Is the PUV modernization program ‘anti-poor?’)

But transport groups maintained that the program was “anti-poor” as it would only lead to loss of livelihood.– Rappler.com