Congress leaders to meet with Duterte over struggle in BBL compromise 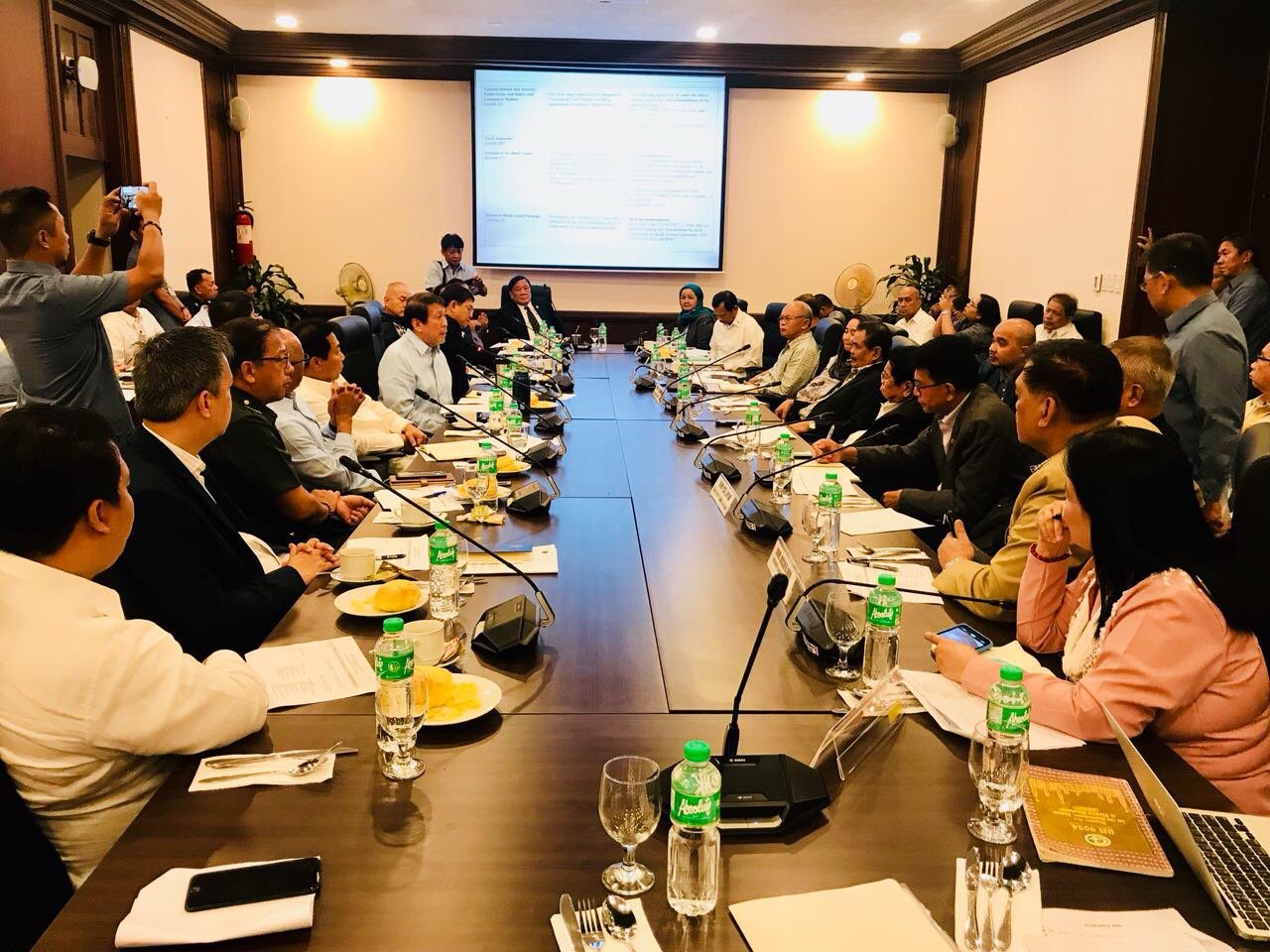 Facebook Twitter Copy URL
Copied
If all goes well during the meeting with the President, the House leadership will bring the proposed Bangsamoro Basic Law to the plenary for 2nd and 3rd reading approval on Tuesday, May 29

MANILA, Philippines – Congress leaders are going straight to President Rodrigo Duterte himself to resolve the contentious provisions in the proposed Bangsamoro Basic Law (BBL), targeted to be signed into law this week.

Leaders of the House of Representatives held a second meeting with the Bangsamoro Transition Commission (BTC) on Monday, May 28, in a bid to find a compromise with lawmakers’ proposed amendments to House Bill (HB) No. 6475 or the BBL.

“So may mga counterproposals. So we would want to hear directly from the President kung ano ‘yung final position niya and then the President will be meeting with us – the Speaker (Pantaleon Alvarez), myself, and the Senate President (Vicente Sotto III) and all counterparts – para pag-usapan itong BBL mamayang hapon,” said House Majority Leader Rodolfo Fariñas.

(So there are counterproposals. We would want to hear directly from the President what is his final position so the President will be meeting with us – Speaker Pantaleon Alvarez, myself, and Senate President Vicente Sotto III, and all counterparts – to discuss the BBL later this afternoon.)

(Those are the issues we still need to talk about. We haven’t agreed on those yet.)

Section 4 of HB 6475 allows cities and provinces sharing a common border with the Bangsamoro to join the plebiscite through a petition signed by at least 10% of registered voters. The bill allows this to be done every 5 years for a period of 25 years after the creation of the Bangsamoro.

HB 6475 also grants fiscal autonomy to the Bangsamoro. But lawmakers argued that fiscal autonomy can only by granted by the Constitution and cannot be superseded by a law.

As of Monday, Fariñas said the BTC has agreed to accept lawmakers’ proposed amendment to remove the BBL’s provisions creating the Bangsamoro’s own uniformed service.

“They agreed that the defense, police, coast guard will be retained by the national government…. There will be a police region in the Bangsamoro, but it will still be under the PNP (Philippine National Police),” said Fariñas in Filipino.

Duterte gave a June 2 deadline to the House and the Senate for the approval of the proposed BBL. Congress only has 3 session days left before it adjourns this week.

Both the House and the Senate already wrote letters to Duterte to certify the bill as urgent. If the President grants their requests, both chambers can pass their versions of the measure on 2nd and 3rd readings on the same day.

This would fast-track the proposed BBL’s passage into law before Duterte delivers his 3rd State of the Nation Address in late July.

If all goes well during the meeting with Duterte, Fariñas said the House leadership will bring the BBL to the plenary for 2nd and 3rd reading approval on Tuesday, May 29. – Rappler.com