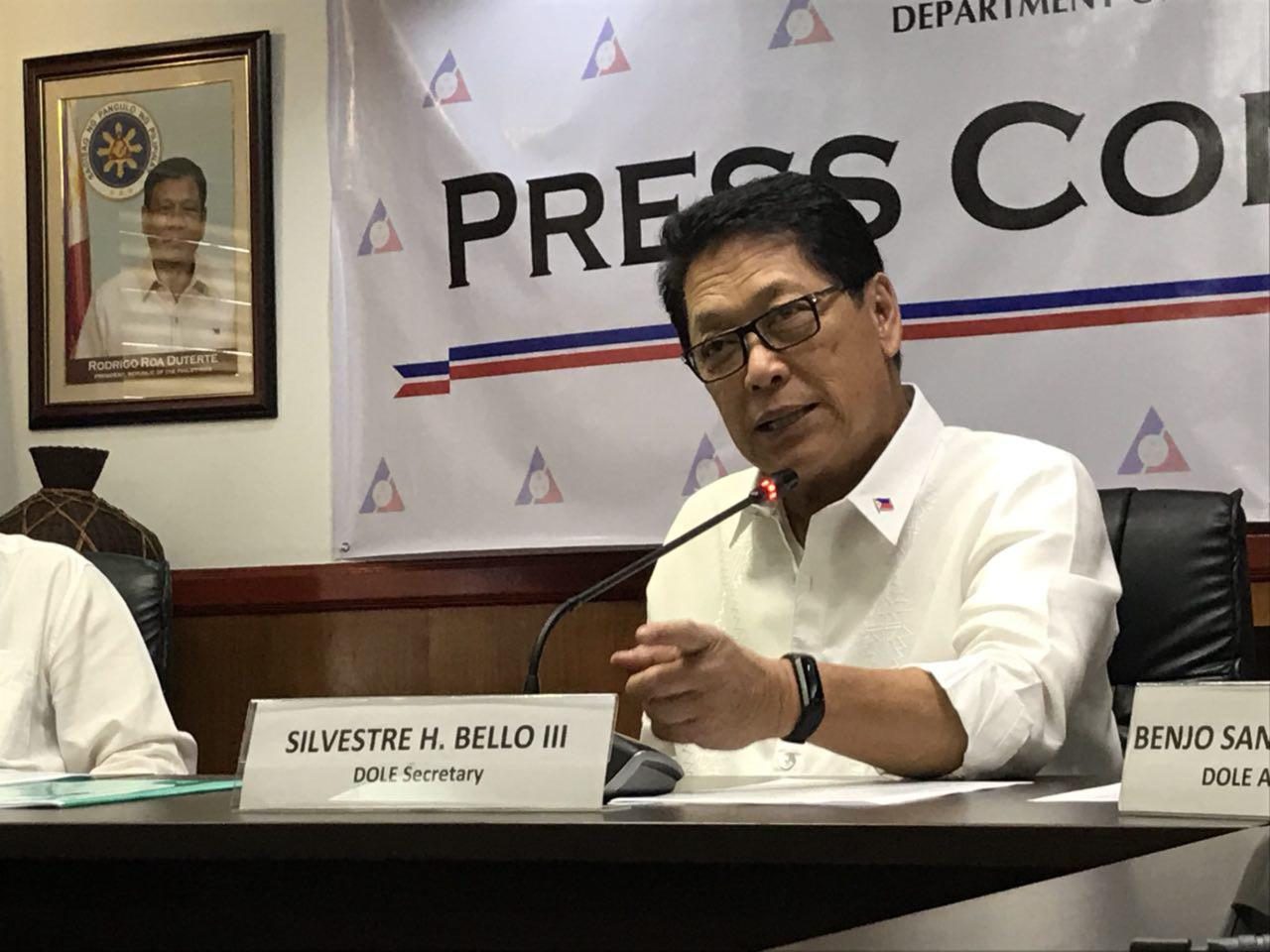 Facebook Twitter Copy URL
Copied
The Department of Labor and Employment says 767 companies were engaging in the labor-only contracting, while 2,610 companies were suspected.

In a news briefing on Monday, May 28, Labor Secretary Silvestre Bello III said a total of 3,377 companies were found to be involved in labor-only contracting practices.

Of the figure, the Department of Labor and Employment (DOLE) said 767 companies are engaged in the labor-only contracting, while 2,610 companies are suspected.

LOOK: Companies engaged or suspected to be engaged in labor-only contracting @rapplerdotcom pic.twitter.com/mcFgCIEOli

From June 2016 to April 2018, DOLE was able to inspect only 99,526 companies out of the 900,000 establishments nationwide due to manpower constraints. DOLE said that 224,852 workers are yet to be regularized under the establishments said to be involved in illegal contracting.

Jollibee Food Corporation topped the list, with at least 14,690 workers yet to regularized. DOLE had ordered the fast-food giant to keep over 6,000 employees in permanent positions in April, but Bello said Jollibee appealed.

“A week ago, Jollibee submitted a regularization order [to DOLE]. They said they will make 1,000 workers regular every year. I find that number too small,” Bello said in a mix of English and Filipino.

Jollibee is followed by pineapple grower Dole Philippines Inc with at least 10,521 workers yet to be in permanent positions, and PLDT with at least 8,310.

Labor Assistant Secretary Benjo Benavidez said that all 767 companies engaging in labor-only contracting practices have been served compliance orders. The rest were issued notices of inspection.

Bello clarified why the Henry Sy-owned SM Malls was not part of the list, despite being previously accused of practicing “end-of-contract” scheme.

“I was asked, why was SM not part of the list? They passed a regularization program, making 5,000 workers in permanent positions. I said, why was it too few? They promised to regularize another 5,000 by the end of the year,” Bello said.

DOLE issued Department Order (DO) No. 174 in March 2017, setting stricter guidelines for contractualization. Under the order, manpower agencies – not the main employers – are ordered to regularize their workers. (READ: Keeping ‘endo’ alive: DOLE’s Department Order No. 174)

In April, President Rodrigo Duterte ordered DOLE to submit a list of companies engaged in the said practice. Bello submitted the list on Friday.

However, Teresita Cucueco, Bureau of Working Conditions director, said that some companies may still appeal the findings of the department, but they would have to go through hearings.

Meanwhile, Bello said that those flagged by DOLE may submit a regularization program for its workers similar to SM. Such proposals would serve as a “compromise,” but will still be up for the department’s consideration.

As of May 11, DOLE said that about 177,000 workers have been regularized through the department’s “intensified” enforcement system. This year’s target is to place 300,000 workers in permanent positions.

Last year, DOLE was able to regularize at least 125,000 of the 200,000 contractual workers target. There are an estimated 1.3 million contractual employees in the country.– Rappler.com