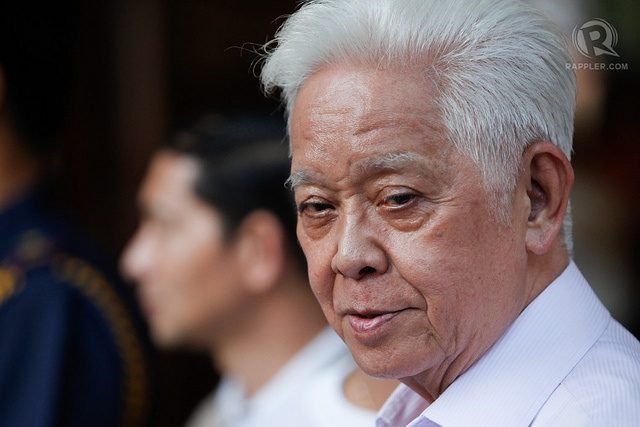 MANILA, Philippines – Former Commission on Elections (Comelec) chairman Sixto Brillantes Jr said it would be “abnormal” for the Supreme Court (SC) to uphold a 50% ballot shading threshold in the vice presidential recount.

This was Brillantes’ reply when Rappler sought him for comment in the ongoing recount for the electoral protest filed by ex-senator Ferdinand “Bongbong” Marcos Jr against Vice President Leni Robredo.

Robredo is appealing to the SC, acting as the Presidential Electoral Tribunal (PET), to consider ballot ovals shaded by at least one-fourth or 25% as valid votes for the recount. Marcos, however, insists the PET should count only ballot ovals that are half-shaded or 50%.

While Brillantes supports Marcos, he does not agree with the latter’s view on the shading threshold.

“I’m not for Robredo. I’m more for Bongbong, but it would be abnormal to use different thresholds,” the veteran election lawyer of more than two decades told Rappler.

Similar to Robredo’s arguments, Brillantes said the Comelec had set the ballot shading threshold at 25% for the 2016 polls.

“In the May 2016 nationwide elections, the Comelec opted to use another shading threshold – 25%. While the same was not announced prior to the elections, the 25% threshold was used in the random manual audit and is being used in all the protest cases in all the elected positions,” said Brillantes, who was Comelec chief from January 2011 to February 2015.

“It will therefore be very inappropriate and abnormal that in reference to the protest case for the vice presidential position, the PET will still avail of the old [shading threshold],” he added.

According to Brillantes, this also means the 25% shading threshold was programmed to apply to all the positions included in the 2016 ballot.

“It would therefore be most abnormal to have a different threshold for the vice presidential protest distinct from the threshold for all the other elected positions in the same ballot,” he added.

Why this matters: The Comelec started setting a ballot shading threshold during the first automated elections in 2010.

The shading threshold corresponds to the minimum area of the ballot oval shaded by the voter that the vote-counting machine (VCM) would read as a valid vote.

In the 2010 presidential race, Brillantes said the Comelec had set the threshold at 50%. This meant the precinct count optical scanner (PCOS) machines used at the time reverted ballots that had ovals that did not meet the 50% shading threshold. Voters concerned were then allowed to correctly shade the ballot ovals to meet the 50% shading requirement.

Brillantes said it was a “time-consuming process,” which led the Comelec to decide to lower the ballot shading threshold to 20% during the 2013 midterm elections. The poll body also dispensed with the process of reverting ballots to voters.

“The effect of the reduced 20% threshold was such that if the voter shades 20% or more, the ballot is accepted and counted. If, however, the shade is less than 20%, the ballot is still accepted by the machine but the vote is not counted,” he said.

Brillantes said the PET was “not informed” regarding the reduction in the ballot shading threshold in 2013 because the midterm national elections “did not involve” the tribunal, which handles electoral cases for presidential and vice presidential candidates only.

Why the ballot shading threshold wasn’t announced to voters: Brillantes explained this is because the poll body generally instructs voters to fully shade the ballot ovals.

“It would not be appropriate for Comelec to announce to the public that there is [a] threshold in the shading of ballots before the elections, simply because that would indicate some form of inconsistency with the general instructions mandating 100% shading,” he said.

The Comelec only announces the ballot shading threshold after the polls for the random manual audit conducted right after the elections.

A random manual audit is the process where the Comelec gets sample ballots to check if the VCMs counted votes accurately. What the VCMs counted in an automated way, auditors would then count in a manual way.

This is similar to the manual recount of votes in the vice presidential race.

Brillantes said the Comelec had publicized the 50% shading threshold used in the 2010 polls only after election day.

But in 2013, Brillantes announced the 20% shading threshold 3 days before election day in order to prepare the auditors, who would do the random manual audit.

Which ballot shading threshold will be applied in the VP recount? The decision ultimately rests on the PET.

When the PET junked Robredo’s motion to apply the 25% shading threshold, the tribunal had said it is “not aware” of any resolution issued by the Comelec that states the applicability of the 25% minimum threshold.

It also ruled that the Random Manual Audit Guidelines and Report – which Robredo cited in her motion – cannot be treated as proof.

Robredo then filed a motion for reconsideration, this time citing a resolution issued by the Comelec in September 2016 that set the vote shading threshold at 25%. But in his comment, Marcos said the Comelec resolution “did not mention a 25% threshold.”

The PET has yet to decide on Robredo’s motion for reconsideration. – Rappler.com