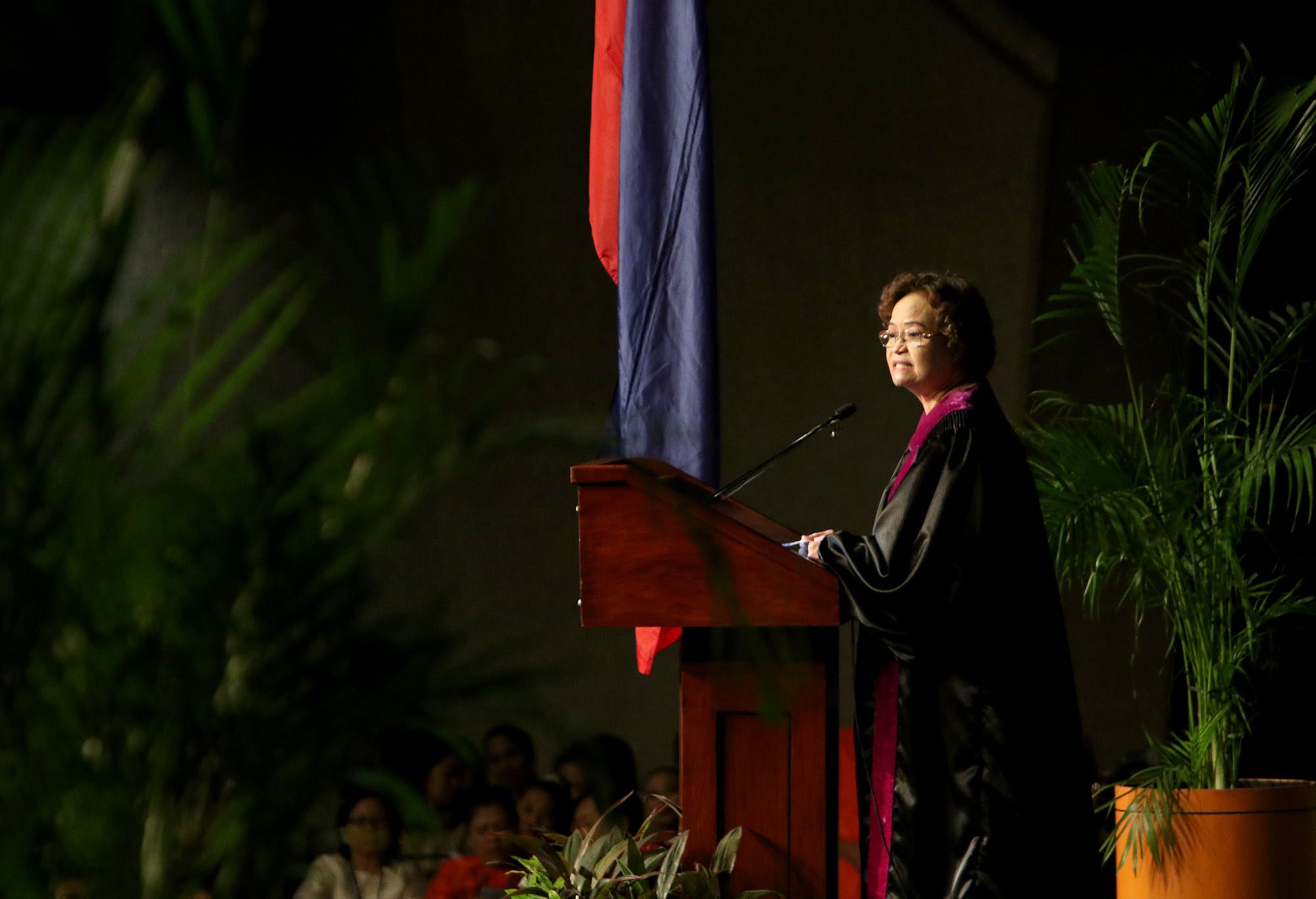 Facebook Twitter Copy URL
Copied
‘You will see it many times in your career that those who rise too fast often fall just as quickly,’ Associate Justice Teresita Leonardo de Castro says in a speech before new lawyers, in apparent reference to ousted chief justice Maria Lourdes Sereno

“If you lose your case on the merits fair and square, own up to it, don’t blame others, and don’t prop up your bruised ego at the expense of your colleagues’ hard-earned reputation and the goodwill of the people for the justice system,” De Castro said in her address to 1,724 new lawyers at the Philippine International Convention Center (PICC) on Friday.

It was a 25-minute speech full of scathing references to Sereno and prominent lawyers who criticized the majority decision,  some of whom were inside the PICC in different capacities.

“Lawyers should be gracious in defeat. If you believe legal pundits on television and to other media of today, you’d think no one loses a case on merits anymore but that the opposing counsel is a scoundrel, or the judge or justice are corrupt or biased or just plain stupid,” De Castro said.

The 69-year-old justice lectured about respect, which she said should be extended to courts at all times.

“If you want respect, you must be the first one to give it. It is our duty to protect the dignity of our judicial institutions and help maintain respect for the judicial processes,” De Castro said.

It became apparent that De Castro would deliver a speech related to the quo warranto controversy when she started talking about what it takes to be promoted in the legal profession.

“You will encounter people who might be promoted ahead of you because of a carefully cultivated, glittering persona and a talent for self-promotion and credit grabbing, instead of substantial accomplishment,” De Castro said.

According to insiders, this was how she and others on the bench perceived  the ousted chief justice.

Gasps in the otherwise very silent plenary hall of the PICC were heard when De Castro said: “You will see it many times in your career that those who rise too fast often fall just as quickly. As Justice Francis [Jardeleza] said earlier, the arrogance will always have a comeuppance. My wish is that none of you will fall prey to that kind of hubris.”

The rivalry between De Castro and Sereno reportedly started when the latter became chief justice in 2012, bypassing the more senior justices. Sereno was 52 when she was appointed chief justice; De Castro was 63 at the time.

“I have had 45 years of career in public service that has steadily progressed through terms of 7 presidents, different administrations, precisely because I do not play politics and simply do my job to the best of my ability and in accordance with the dictates of my conscience,” she said.

“Only those who do not know me at all or those who hate my guts will say otherwise,” added De Castro, who was presiding justice of anti-graft court Sandiganbayan and part of the division that convicted former president Joseph Estrada of plunder.

De Castro appealed to the public not to generalize and oversimplify the Court’s decisions, also a reference to how the quo warranto decision has been perceived so far.

“We should not be unduly bound by models and general principles without regard for factual milieu of the case in point. Do not fall into oversimplification for real life problems are neither closed nor simple,” she said.

“Be courageous in those instances, where you know your opinion or your action will be subject to intense opposition and public ridicule, will you have the moral courage and the fearlessness to speak the truth and stand by what you beleieve is right? I fervently pray that you will,” she said.

“If you truly subscribe to the popular view and you let that guide your legal decisions, then, good for you. Doing that does not require you to be brave, and entails no personal cost,” De Castro added.

Sereno was ousted for not submitting her Statements of Assets, Liabilities and Net Worth (SALNs) to the Judicial and Bar Council (JBC) when she applied for Chief Justice in 2012. The SC also found her guilty of not filing them at all.

Sereno had defended her non-submission by saying it was not feasible to recover SALNs filed from years ago. She also said one’s SALN is not the end-all be-all of integrity. (READ: Sereno appeals ‘null and void’ ouster at Supreme Court)

Apparently referring to the issue of compliance, De Castro said, “There are the clever ones who get away with non-compliance with seemingly innocuous rules. For young lawyers starting up a job, stressing over cases or reports, it may seem like there are requirements too insignificant to bother with, especially when there are urgent work to be accomplished.”

“Follow the law simply because it is the law, and not because you fear punishment, or you expect to be rewarded by it,” she added.

The oath-taking on Friday was controversial because days earlier, Bar Chairman Associate Justice Lucas Bersamin warned the new lawyers not to “disturb decorum” or else they would face contempt. It was seen as a preemptive move against a potential show of opposition towards the quo warranto decision.

In his speech, Bersamin said there are “guidelines” for criticizing the High Court.

“I am not in the least hinting that you cannot criticize the Supreme Court or the lower courts. You must really do so at times, or even a lot of times, because that is your right as citizens,” Bersamin said.

“But we must agree at least that the right to speak in criticism cannot be unbounded. Judicial guidelines of when and how to criticize the courts, particularly the Supreme Court, are clear. Consult those guidelines before you lose your privilege of membership in the Bar,” he added.  – Rappler.com