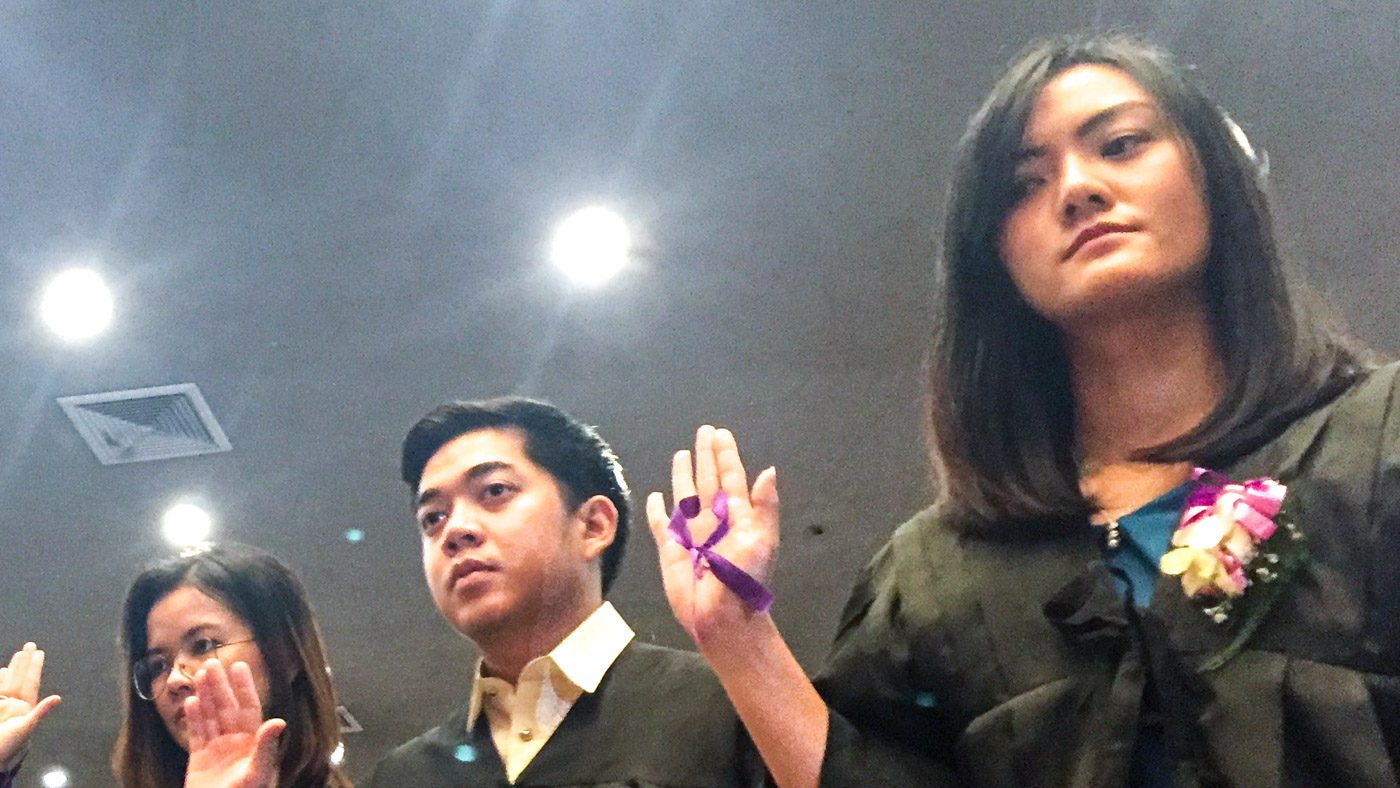 MANILA, Philippines – On Friday, June 1, Audrey Ng took her oath as a new lawyer, and she did so rather daringly, as she tied a purple ribbon on her hands and risked being held in contempt of the Supreme Court.

The warning made days ahead was ominous: do not disturb decorum, or you will face contempt.

Moments before they recited their lawyer’s oath, Associate Justice Lucas Bersamin’s threat sounded even more severe: criticize the Court outside “guidelines” and “lose your privilege of membership in the Bar.”

“The fact of the matter is, the Supreme Court has just unseated its own Chief Justice after openly, albeit passive-aggressively, calling for her resignation,” Ng said.

Indeed it was an oath-taking in the strangest of times. The Supreme Court’s quo warranto ouster of former chief justice Maria Lourdes Sereno led a United Nations prober to declare the country’s judicial independence as under attack.

“Foreseeably, how citizens view this institution had been affected. The purple ribbon is to remind ourselves of this quote from Justice JBL Reyes: ‘No master but law. No guide but conscience. No aim but justice,'” Ng said, referring to former Supreme Court Justice Jose Benedicto Luis Reyes, who championed human rights during the late president Ferdinand Marcos’ martial law. Ng and several other batchmates from the University of the Philippines (UP) College of Law wore the purple ribbon on their hands and wrists during the oath-taking. She said Bersamin’s warnings did not scare her, but surprised her instead.

“We all knew that the oath-taking would be done in a special en banc session, so there was a certain level of decorum expected of us. I don’t think we needed to be reminded of the Court’s contempt power just to behave,” Ng said.

She added: “I don’t believe there was anything contemptuous about wearing a purple ribbon. It would not have disrupted the order and security of the ceremonies.”

The purple ribbon, although a subtle way of voicing out opposition, spoke the loudest on Friday inside the massive plenary hall of the Philippine International Convention Center (PICC).

After all, these are young, newly sworn-in lawyers who are resisting what was, in effect, a directive to get in line.

As Bersamin told the 1,724 new lawyers: “Let us always detest and reprove a fellow lawyer who joins a public demand for disrespecting the courts and their rulings. Let us rethink that strategy, lest you and that other lawyer become unworthy of the Lawyer’s Oath. If that happens, you would thereby assault the Judiciary of which you are but its mere officers.”

Ng said: “The Supreme Court is not infallible. Only the Constitution is supreme. Early on, my professor in constitutional law instilled in me the belief that in order to approximate what is right and true, it is always wise to encourage a marketplace of ideas. So I think it is the duty of every citizen – members and non-members of the legal profession alike – to contribute to this marketplace of ideas, with the end in view of upholding the supremacy of our Constitution.” Associate Justice Teresita Leonardo De Castro’s speech had the same tone as Bersamin’s insofar as calling out lawyers who criticize the Supreme Court.

De Castro lectured about how it is brave to take an unpopular view, especially in the age of social media where “many put premium on social acceptance.”

“There may be a few among you who fear that some talented netizen would put a shot of your most unflattering photos and make a viral meme out of them. If you truly subscribe to the popular view and you let that guide your legal decisions, then, good for you. Doing that does not require you to be brave, and entails no personal cost. It makes you feel safe and secure,” De Castro said, addressing the millennial generation which Ng is a part of.

The ceremony was a bizarre event. Six dissenters on the stage, and more oppositors among the law professors there, listened as De Castro riled against “incendiary” opinions.

Ng instead focused on her oath – the part of the ceremony which inspired her the most.

“‘I will maintain allegiance to the Republic of the Philippines; I will support and defend its Constitution and obey the laws as well as the legal orders of the duly constituted authorities therein.’ Our oath clearly puts primacy on the rule of law. There is nothing about making the law yield to what one seeks to achieve,” Ng said.

“I hope we all live by the statements we made that day,” she added. – Rappler.com