Jun 2, 2018 2:19 PM PHT
Agence France-Presse
Facebook Twitter Copy URL
Copied
Anguished relatives sobbed over the caskets of their loved ones at a series of funerals in the capital Managua, shocked over the brutal repression of what was a peaceful Mother's Day march. 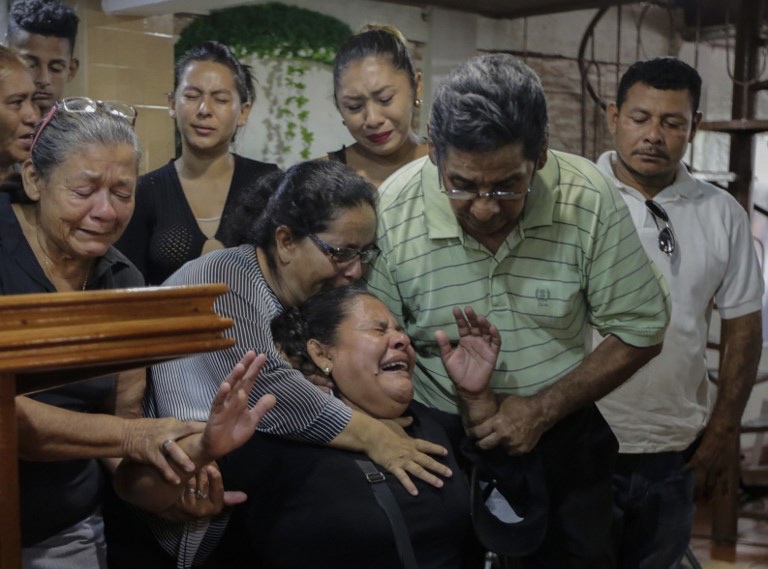 MANAGUA, Nicaragua  – Mourning families held funerals across Nicaragua on Friday, May 31, for 16 people killed in one of the bloodiest days of protest in the country, where weeks of anti-government demonstrations have left more than 100 dead.

Anguished relatives sobbed over the caskets of their loved ones at a series of funerals in the capital Managua, shocked over the brutal repression of what was a peaceful Mother’s Day march on Wednesday.

Hundreds of people packed into a church in Managua for the funeral of 14-year-old high school student Orlando Cordoba.

He was hit by a bullet while marching in a protest against President Daniel Ortega’s government at the Central American University.

The teenager’s body was draped with a blue-and-white scarf bearing the legend “Free Nicaragua.”

“Lord give me peace in my heart… I never expected this,” said his weeping mother, Yadira Cordoba, as she clung to his coffin while it was being closed.

Policeman Armando Reyes asked fellow police to leave the funeral of his son Francisco Reyes, 34, who was shot in the head during Wednesday’s march.

“I am very hurt. I never imagined they would take my son’s life. They murdered him without a problem, they are murderers,” the dead man’s mother, Guillermina Zapata, told Agence France-Presse.

Similar emotional scenes were repeated at other funerals as victims were laid to rest after what protest umbrella group Civic Alliance described as the “worst massacre” since protests started on April 18.

Ortega, 72, has dominated Nicaraguan politics since leading the Sandinista revolution that ousted dictator Anastasio Somoza in 1979.

He took over the country as head of a ruling junta and then president until 1990, then returned to power in 2007 – and looks determined to stay there, despite the protests and the devastating loss of his once-solid support from the business elite.

The 7-week-old protests began over a much-hated pension reform and ballooned into a mass threat to Ortega’s rule.

The embattled president denies repressing them, and called Wednesday’s unrest a “conspiracy” by the opposition aimed at “terrorizing” the people.

He has rejected calls to step down and the Catholic Church, which has tried to mediate the conflict, has refused to resume the talks as long as government “repression” continues.

Casting further shadows over the talks, the Inter-American Commission on Human Rights warned that Silvio Jose Baez, the auxiliary bishop of Managua who had been mediating them, had received “death threats” and that his life was in danger, in a statement released in Washington.

The Organization of American States meanwhile said Ortega’s government had agreed to a timeline for proposing electoral reforms by the end of the year.

However, the announcement will scarcely placate the opposition, which is calling for the immediate overhaul of a system it says has been hijacked by the president.

‘He’s afraid of the people’

The protests resumed Friday, but in far smaller numbers.

Of the several dozen protesters who gathered at the Metrocentro plaza in Managua – the focal point of the protests – many said their fellow demonstrators were too afraid to come out after Wednesday’s crackdown.

“It’s a cruel form of repression,” said one demonstrator, referring to Wednesday’s killings.

“There were babies there, one or two years old, and they just opened fire. It was a horrible massacre. And yes, we’re scared. But it’s even scarier to do nothing,” said the 25-year-old sociology student, who asked to remain anonymous for her own safety.

Brandishing Nicaraguan flags and signs with messages such as “Down with the dictatorship!” the protesters rallied along some of the capital’s central arteries as passing vehicles honked their support.

“Sources say there were about 3,000 people there, and he gave the order to repress them,” he told AFP.

“He’s afraid of the people.” – Rappler.com