MANILA, Philippines – In a recent proposal to increase the taxi flagdown rate to P50, a group cited the welfare of taxi drivers amid rising fuel prices as one of the reasons for its request.

Indeed, prices of auto-liquefied petroleum gas (LPG), which is widely used by Filipino taxi drivers, have increased by at least 14.4% since the Land Transportation Franchising and Regulatory Board (LTFRB) approved a P40-taxi flagdown hike in December 2010.

Last month, the Department of Energy pegged LPG prices at around P34.90.

The minimum wage in the National Capital Region improved by only 5.4% since the last time the LTFRB approved a taxi fare hike.

When taxis last raised their fares, workers in non-agriculture industries were earning a minimum of P404 a day. From May 2011 up to the present, Filipino in these industries have earned at least P426 a day.

In terms of other expenses, consumer prices went up in 2011.

Inflation – which measures changes in cost of living based on movements in consumer good prices – rose to an average of 4.8% in 2011, according to the Department of Trade and Industry (DTI). In 2010, the DTI pegged inflation at 3.8%.

In pushing for a fare hike, taxi operators said their drivers need to earn. Taxi drivers, in turn, said a fare increase only benefits operators who eventually raise the boundaries for the use of vehicles. 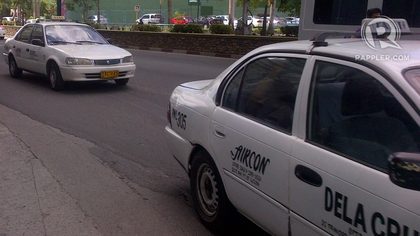 Jojo Gabriel, a 37-year-old taxi driver, told Rappler a fare increase is counter-productive for drivers like him.

“Masuwerte na ang kumita ng P500 dahil ‘yung gasolina ang matindi eh,” he said. (We consider ourselves lucky if we earn P500 because it’s the gasoline that is most burdensome.)

Netizens shared their thoughts on the issue in response to a question Rappler posed on its Facebook and Twitter accounts. “A taxi operators’ group is proposing a P50 flag-down rate for cabs. What’s your take on this?”

Edsel Bautista said this is “too much.” “It’s their behavior that should be corrected. There are lots of (passengers) but then they hardly earn because they choose their passengers,” he said in a mix of English and Filipino, referring to the perennial problem of choosy and abusive taxi drivers.

Redentor Balutan expressed sympathy for taxi drivers. “Kayo naman o, parang kayo lang gustong mabuhay… Kawawa ang driver, kasi sila nagbabayad ng fuel at boundary. Ang dapat gawin, bawasan ‘yung boundary rate ng operator,” he said. (It’s as if only you would like to live… The drivers are pitiful because they have to pay for their fuel and boundary. What has to be done is to lower the operators’ boundary rates.)

“You can’t ask for an increase, kaka-increase lang,” added Carlos Miguel Cusi Cinco. (An increase has just taken effect.) “Come back in a few years and try again.” – Rappler.com