Jun 5, 2018 6:16 PM PHT
Lian Buan
Facebook Twitter Copy URL
Copied
The forfeiture of the Australian nun’s missionary visa calls into play guarantees such as freedom of speech and freedom of religion. But do they apply to a foreigner? 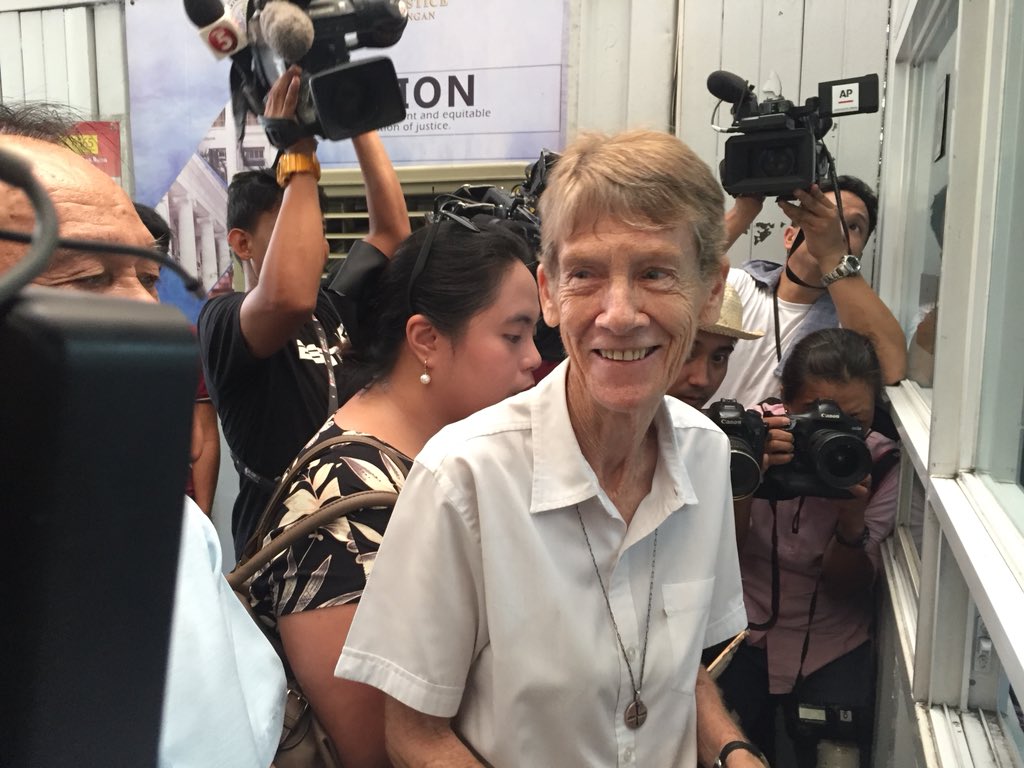 MANILA, Philippines – The order for Australian nun Patricia Fox to leave the country has put a spotlight on Philippine immigration laws, as the nun’s lawyers claim that the order has left foreigners “at the mercy and whims” of the Bureau of Immigration (BI).

Fox, a missionary nun whose work involves helping farmers, peasants, laborers and indigenous peoples, was flagged by the BI for allegedly being too political. Aside from the forfeiture of her missionary visa, she has been ordered to leave the country, and faces deportation and getting blacklisted.

Fox’s deadline to leave the country is supposed to be on May 25, but Justice Secretary Menardo Guevarra has extended it to June 18  as the Department of Justice (DOJ) resolves the arguments.

In the midst of all this, the 71-year-old Fox insists she would not leave the country she has called home for the past 27 years. (READ: Duterte admits ordering probe vs Australian nun)

Can a country kick out a foreign guest whenever it wants, and for just any reason? What are the privileges of foreign visitors in the Philippines?

Foreign visas around the world are considered privileges, perhaps the highest privilege given to foreigners.

Fox does not contest that her missionary visa is a privilege “that is subject to the discretion of the granting authority.”

However, in her reply to the DOJ submitted on Tuesday, June 5, Fox said: “This [discretion] does not come without limitations. To espouse otherwise, as what the BI is fervently pushing in its comment, would run counter to the very nature of an organized society and would set a very dangerous precedent championing an unbridled  exercise of State authority.”

In its comment to the DOJ, the BI said it is within its discretion to forfeit visas without notice and hearing. The BI cited as an example that in March this year, the bureau “unilaterally forfeited visas of foreigners in 15 cases.”

For Fox and her lawyers at the National Union of People’s Lawyers (NUPL) and Sentro, this admission does not justify BI’s action but is further proof of the bureau’s “unconstitutional and illegal practice.”

Citing a Supreme Court ruling, Fox said “police power is not without its own limitations.” Fox’s reply also cited Section 1, Article III of the Constitution which guarantees “due process to every person, the purpose of which is to prevent arbitrary governmental encroachment against the life, liberty, and property of individuals.”

The BI said one of the reasons it forfeited Fox’s visa was because she violated the coverage of her visa. The bureau claimed the nun only declared Barangay Amihan, Quezon City, as the place of her missionary work. She supposedly violated this by doing work outside that village.

Fox called this interpretation “absurd” and said it will “unduly restrict her religious work in violation of the constitutional precept against interference in the exercise of one’s right to religious freedom and worship.”

Fox also noted that the BI clarified that a visa forfeiture order is not the same as a visa cancellation order or a deportation order. The BI said Fox can always return to the country if she can secure a tourist visa. (A deportation complaint is pending.)

“It becomes notable then that there is no provision covering visa forfeiture in the 2015 Omnibus Tiles of Procedure of the Bureau of Immigration. Hence, this leaves foreigners at the mercy and whims of BI officials, having no recourse to even challenge their decisions – a clear indication of denial of due process of law,” Fox said.

Does the Bill of Rights apply to foreigners?

“The Bill of Rights recognizes freedom of expression and to peaceably assemble. The Bill of Rights, again, does not distinguish between a foreigner and a citizen, a permanent resident or a sojourner. It applies to all who are physically within the Philippine territory under the government’s jurisdiction,” Fox said.

However, BI Operations Order No. SBM-2015-025 dated July 3, 2015, states that “foreign tourists in the Philippines are enjoined to observe the limitation on the exercise of their political rights during their stay in the Philippines.”

“The operations order is of doubtful validity. For another, the petitioner is a holder of a missionary visa. She is not a tourist but a missionary who renders missionary work in the Philippines. Hence, the said Operations Order is not applicable in petitioner’s case,” Fox said.

Fox added that the international law on basic human rights will protect her. The Philippines is a signatory to the  International Bill of Human Rights.

Using international standards, Fox said that the Siracusa Principles were very clear on the conditions that must be met to restrict freedom of expression and assembly, such as threats to public order, public safety, and national security.

“When petitioner joins rallies and fact-finding missions and similar activities, she is not violating the law. She also did not pose danger to the peace, order and security of the State….She is afforded the same protection enjoyed by Filipino citizens,” Fox’s reply said.

Fox and her lawyers appealed to Guevarra to “look into the following provisions of international law” when resolving this issue.

The immigration laws of richer countries are under scrutiny these days in terms of the treatment of immigrants, including millions from the Philippines. The case of Patricia Fox prompts a self-review whether a small country like the Philippines is treating foreigners any better. – Rappler.com