‘Sickening’: Lawmakers react to Duterte kissing an OFW on the lips

Jun 6, 2018 5:08 PM PHT
Facebook Twitter Copy URL
Copied
So far, only one lawmaker – Senator Sherwin Gatchalian – has justified President Duterte's act, saying what happened was like how actors shoot kissing scenes not with their wives 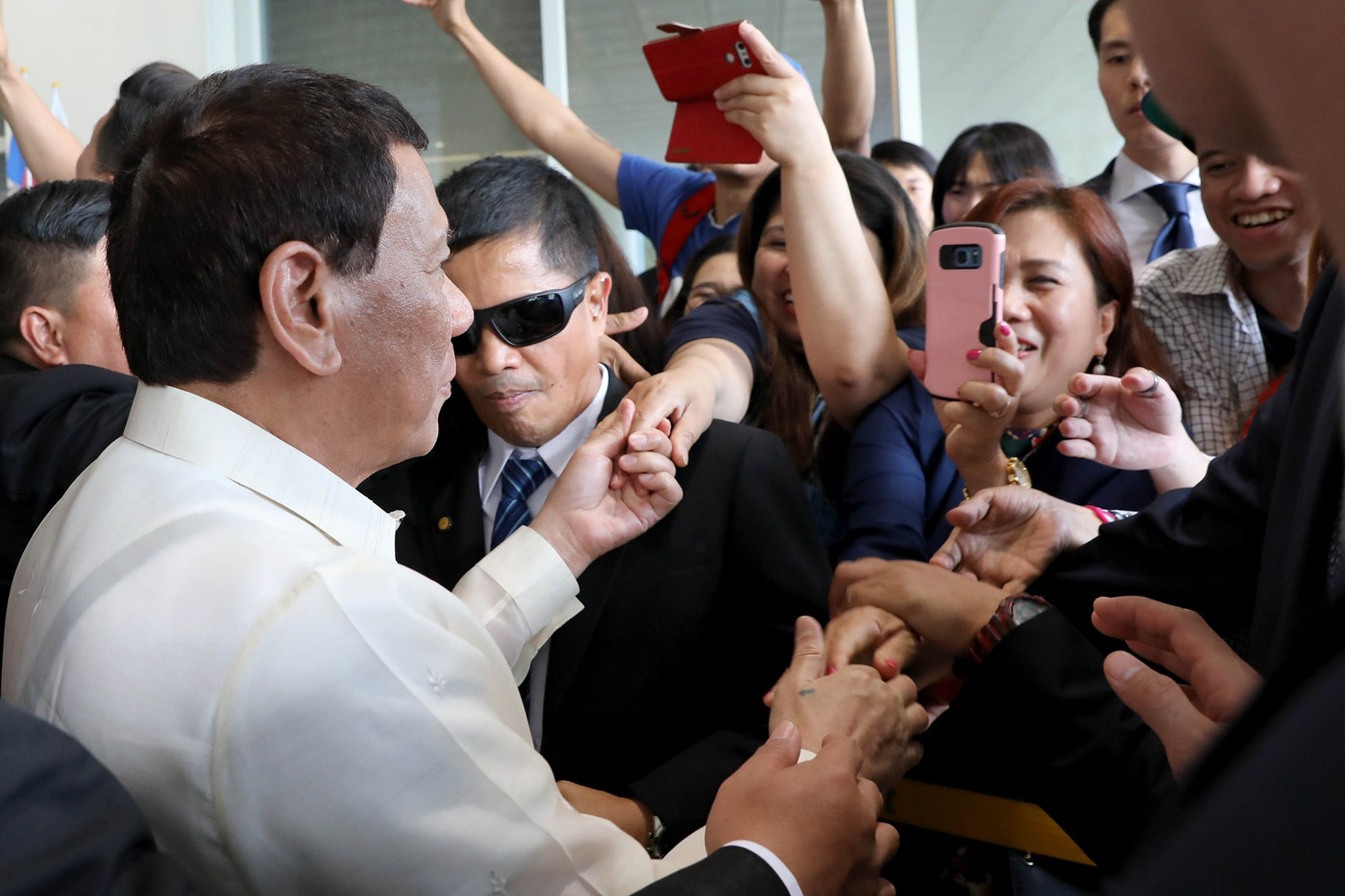 MANILA, Philippines – Among senators and representatives who reacted to President Rodrigo Duterte’s kissing of an overseas Filipino worker (OFW) on the lips in South Korea, only one – Senator Sherwin Gatchalian – came to the Chief Executive’s defense.

The rest hit the President for using his position to solicit a sexual favor, giving the act a range of labels, from being improper to being “despicable” and “sickening.” (READ: Duterte to critics of controversial kiss: ‘Inggit lang ‘yan’)

Muntinlupa Representative Ruffy Biazon pointed out the wrong message that Malacañang was sending when it insisted that the kiss was culturally acceptable: it makes OFWs vulnerable to sexual abuse in their host countries.

Here are the statements of some legislators:

“Obviously, they accomplished the purpose, based on the laughter and giggle from the women in the audience. Question is: does that make it right and appropriate? I don’t think so, if we consider the status of both parties. The woman is married to a Korean, the man is a president of the Philippines who is on a state visit to Korea. If it was a movie comedian onstage, people won’t mind at all.”

“It was a despicable display of sexism and grave abuse of authority. President Duterte acted like a feudal king who thinks that being the president is an entitlement to do anything that he pleases.

“Even if the act was consensual, it was the President, possessed of awesome, even intimidating, power, who initiated it. It was not a meeting of two consenting individuals on equal terms. Uneven power relations were clearly at play. And President Duterte took advantage of that severe power disparity.”

(You know we all have our own gimmicks in politics, right? But there are gimmicks that work and those that don’t. I shared the same reaction as many of the netizens and female legislators that it was not appropriate for a president to do that, to get a kiss like that. Just because you can do it doesn’t mean you should do it. I’m hoping, like many of our fellow countrymen, that these acts stop. As a father, I have two daughters, when I saw the video, it did not sit well with me, just like it didn’t sit well with many of you.)

(Such a unique “gimmick” by Duterte, who openly disrespects women. What’s bothersome is how his supporters seem to enjoy it. Sickening!)

“Ako, I would like to compare this sa mga artista, dahil may mga artista na may asawa but they also have kissing scenes in their movies, in their TV shows. So I think, as long as it’s kept professional and there’s an understanding within the partners, then siguro puwede nilang gawin ‘yun. Walang malisya. I think this was done out of curiosity of the crowd and kung wala namang na-offend, especially the female party, and then I think it was mutually consented.“

(Me, I would like to compare this to married celebrities who still do kissing scenes in their movies, in their TV shows. So I think, as long as it’s kept professional and there’s an understanding within the partners, then maybe they can do that. There’s no malice. i think this was done out of curiosity of the crowd, and if no one was offended, especially the female party, then I think it was mutually consented.)

“To say that kissing a married woman on the lips is accepted in Philippine culture is putting our Filipino OFWs at risk of abuse by their employers. This statement might give foreigners the boldness to take advantage of Filipinas in their employ.”

“Duterte should start thinking about how his stunts resonate and set a new low standard for people in public service. Nakakalimutan na ng mga tao na presidente ang nasa harap nila. (They forget that it’s a president in front of them.) Instead of engaging in critical discussions about policy and development, they simply start waiting for the president’s next show.

“The people have the tendency to put their government leaders on a pedestal. Duterte in this position opts to spread misconduct rather than use his position to encourage a brand of service centered on dignity and good Filipino values.

“Mas nakakadismaya pa na may mga tao na dinedepensahan ang aksyong ito ng Pangulo. Kung patuloy ang ganitong asal, ito na ang magiging bagong normal para sa ating mga lider. (It’s even more dismaying that there are people who defend this action by the President. If this conduct continues, it will become the new normal for our leaders.) I believe that the President’s supporters are not naïve on how government officials should conduct themselves. They should be able to criticize Duterte’s inappropriate and wrongful actions.

“Ibalik natin ang dignidad at respeto sa imahe ng Opisina ng Pangulo. (Let’s bring back the dignity and respectability in the Office of the President.) The Filipino people deserve leaders; not entertainers.”

“Gabriela Women’s Party deplores President Duterte’s flagrant display of machismo when he kissed an overseas Filipina worker on the lips during the meeting with the Filipino community in South Korea. (READ: Gabriela on Duterte kissing OFW: ‘Disgusting theatrics of a misogynist’)

“We refuse to take such distasteful degradation of women as something not unusual. The act, which was broadcast on different platforms, carries with it a very troubling message to the public: that the President can do anything with women, upon his beck and call, to underscore his machismo and misogyny. This normalizes the view that doing such favor for men, especially those in power, can be a delightful macho spectacle, and alarmingly makes sexual advances against women look right.

“We have seen yet again in the incident how Duterte casually resorts to his misogynist show whenever his antics ring hollow or when faced with pressing issues. What he did in South Korea easily overshadowed the issues being raised by migrant workers on the adequacy and effectiveness of assistance programs abroad.

“This latest affront on women’s decency by President Duterte creates more reasons for women to advance the #BabaeAko campaign. We will never seal our lips in the face of Duterte macho-fascist attacks and intimidation tactics. We will continue to speak out and counter the rotten feudal-patriarchal culture being perpetrated by the President.”

Duterte kissed OFW Bea Kim on the lips onstage during a gathering of Filipinos based in South Korea on Sunday, June 3. She said in a video taken right after that there was “no malice” in the kiss. Her South Korean husband was in the audience that night.

After the act sparked outrage, Presidential Spokesperson Harry Roque defended it, saying it was a “playful act” that most Filipinos would find “acceptable.” – Rappler.com