Jun 7, 2018 9:00 AM PHT
Eloisa Lopez
Facebook Twitter Copy URL
Copied
'This fight would probably be the most difficult of all that we have faced, but we shall draw strength from the brave soul that we have loved dearly. Her name was Donna,' says the Sigma Delta Pi Sorority 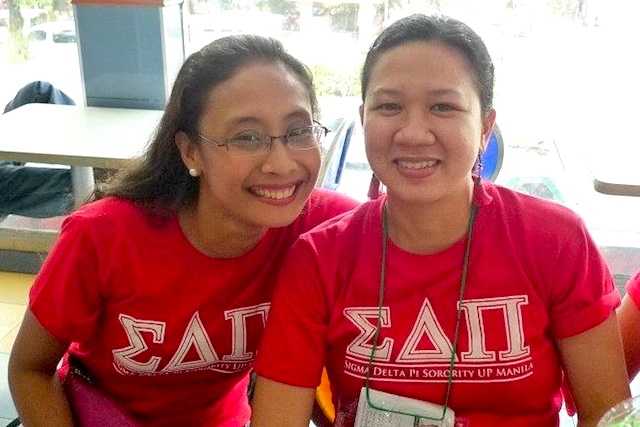 MANILA, Philippines – Madonna Joy Ednaco Tanyag would have been a mother of two in a few months, had she not encountered the man who stabbed her to death in front of a lottery outlet in Quezon City, on Monday, June 4.

Tanyag, 32, was an assistant special prosecutor at the Office of the Ombudsman, a mother to a two-year-old girl, and a loving wife to dentist Cris Tanyag. She was 5 months pregnant with their second child.

Before she embarked on her career and motherhood, Tanyag was already helping nurture her sisters at the Sigma Delta Pi Sorority at University of the Philippines in Manila. In the testimonials gathered by Rappler, her sorority sisters and friends remembered her as a woman with a passion to serve and a leader that was generous with her wisdom.

(Donna already knew how to love like a mother even when she had no child yet. I was the first goddaughter of Donna in the Sigma Delta Pi Sorority. I joined the sorority with a heart for the nation, but I was naive. If I learned anything in relation to our country, most of it was because of her.)

Catangay noted that she and Tanyag had very different personalities, but it never hindered Tanyag from teaching her.

(She taught me, she helped me, she did everything she could to make sure I was okay. She was like a mother because even if I had shortcomings as a sister, friend, goddaughter, she never got angry.)

“Kung anuman ang aking narating, nagawang mabuti, isa siya sa pinaka-proud,” she added. (She was among those who were most proud when I accompllished something, did something good.)

Like Catangay, Camy Mariquina, a sorority sister from a lower batch, said it was also Donna who brought out her “potential” to be a leader.

(Ate Donna was among those who brought out my potential as a leader. She was one of the sisses who opened my eyes. She had a unique way of explaining [things] so that they are easily understood, direct to the point.)

For Beauty Chu, there was no one else like Tanyag, for she never conformed to the norms dictated by society.

“Before she joined the sorority,she already had the passion to serve the people. She was among the members of the sorority who helped in educational discussions, especially in enlightening other members on the plight of the masses,” Chu said in a mix of English and Filipino.

Indeed, even when she finished her studies, Tanyag kept in touch with her sorority sisters, and continued to teach and inspire other aspiring lawyers.

“During her alumna years, she was the first to respond to sisters in need,” Ellen Tayag said. “From sorority projects, such as outreach programs, relief operations, or simple aid to personal matters of the sisses, Sis Donna was always one call or text away.”

“She was an inspiration to many of us because of her wit and intellect fully used to educate and serve. Ganoon namin maalala si Ate Donna – simple pero nagma-markang tunay,” Tayag added. (That’s how we will remember Ate Donna – simple but true.)

In a testimonial posted to Facebook, Jemae Nadonga said she remembered Tanyag with the lines from Pablo Neruda’s “Tonight I Can Write the Saddest Lines.”

“’Napakaikli ng pag-big, napakahaba ng paglimot.’ Isa lang ‘yan sa mga paborito mong isinalin na Neruda lines na ibinahagi mo sa akin noong college tayo,” Nadonga wrote. (“Love is so short, forgetting is so long.” That was one of the your favorite translations of Neruda lines that you shared with me when we were in college.)

(But Neruda was right, Donna. “Love is so short, forgetting is so long.” The love you offered to your family, child, husbnd, and to your unborn child was just too brief. To your work, friends, the country. Love for life. Love for music. Love for the arts. Love for the truth. Love for what is right. It was too brief.)

Though Tanyag’s time on earth was too brief, Nadonga said her friend accomplished so much during her lifetime. “Pagyayamin [namin] ang mga natitira naming alaala,” she wrote. (We will nurture the memories you left behind.)

“A life that touched so many is no ordinary life. This was a life well-lived – one worthy to be remembered and emulated,” the sorority said.

“Those who mercilessly took her life and her unborn child would never understand the value of the person they stole from her loved ones and the people that Sis Donna was committed to serve,” it added.

The sorority called on authorities to put the perpetrators of the crime behind bars, along with those responsible for the killings of other state prosecutors.

“We, the Sisters of the Sigma Delta Pi Sorority, strongly condemn the brutal killing of Atty Madonna Joy Ednaco-Tanyag. We call on the authorities to bring the perpetrators of this horrendous crime against our sister and many other public servants who stayed true to their oaths, to justice. One life lost is one too many,” it said.

The statement also called on the Office of the Ombudsman and the UP community “to never stop calling for the truth to surface and justice [to] be served.”

“This fight would probably be the most difficult of all that we have faced, but we shall draw strength from the brave soul that we have loved dearly. Her name was Donna,” it said.

In a statement on Wednesday, Ombudsman Conchita Carpio Morales also noted that Tanyag was known to her colleagues as a “hardworking and tough prosecutor, handling high-profile cases.”

She also thanked the Quezon City Police District for handling the case swiftly.

Tanyag worked at the Office of the Ombudsman for two years, after working at the Securities and Exchange Commission for 3 years.

Chief Inspector Rodel Marcelo, head of the Quezon City Police District’s Criminal Investigation and Detection Unit, however clarified that they had not found leads to classify Tanyag’s death as work-related.

Philippine National Police chief Director General Oscar Albayalde said in a press briefing on Tuesday that Avenido was so “deep into drugs” ever since his boyhood that he supposedly robbed and killed Tanyag so he could get enough money for his vice.

Marcelo told Rappler on Wedneday, June 6, that while the case was deemed “solved,”  the QCPD would still look into Tanyag’s cellphone for other leads that they may have missed.

Tanyag’s cellphone was only recovered on Wednesday after an unidentified citizen returned it to the family, and then to the police. Avenido supposedly threw the phone after escaping the crime scene. – Rappler.com