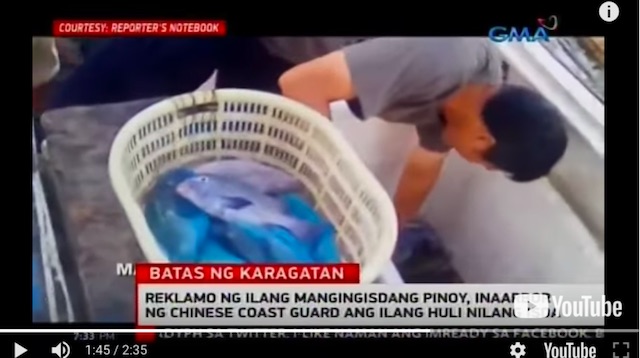 MANILA, Philippines – The China Coast Guard has been habitually taking the catch of Filipino fishermen in Panatag (Scarborough) Shoal off the coast of Zambales province, videos show.

GMA News obtained a mobile phone video of men in a China Coast Guard speed boat boarding a Filipino vessel to take some of their catch. A news report aired on June 7 showed a male Chinese digging through their fish.

In another instance, a GMA News team that joined Filipino fishermen to the shoal also came face to face with Chinese who approached their boat for fish. The foreigners left empty-handed, however, because the fishermen told them they still had no catch at the time.

The encounter was caught by cameras the team hid from the Chinese.

“Basta hinahalungkat nila, sir, kunin nila ang gusto nila. Ilagay nila sa plastic. ‘Yung magaganda pa ang kunin nila (They just dig through our catch and get what they want. They put it in plastic. They really choose the best ones),” said a fisherman interviewed for the report.

The incident comes as the Philippine military is trying to persuade fishermen who used to frequent the shoal to go back there.

Filipino fishermen were able to return to their traditional fishing grounds in the waters of Panatag Shoal. It’s the site of a 2012 tense standoff between the Philippine Navy and the Chinese Coast Guard, which resulted in Beijing’s practical occupation of the shoal.

The Chinese appear to be regularly inspecting and constantly occupying the shoal, he said.

An international court ruling said Scarborough Shoal is a common fishing ground for Filipino, Chinese, and neighboring fishermen despite being located inside the Philippines’ Exclusive Economic Zone.

Presidential spokesman Harry Roque said the Philippines will lodge a complaint with China over the incident.

The report follows another incident of Chinese harassment in the West Philippine Sea (South China Sea). The Philippines has filed a diplomatic protest over a Chinese chopper’s actions in Ayungin (Second Thomas) Shoal, where it hovered over a rubber boat deployed for a resupply mission of the Philippine military.

Defense Secretary Delfin Lorenzana said the Ayungin incident was supposed to be an isolated case. – Rappler.com