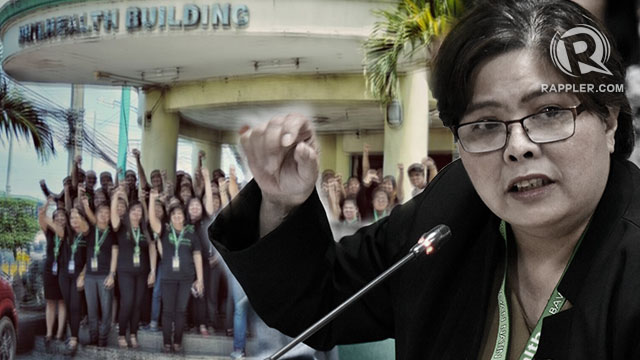 MANILA, Philippines (UPDATED) – Employees and officers of the Philippine Health Insurance Corporation (PhilHealth) held a nationwide vigil against the continuous mismanagement of the agency.

They held a “black candle vigil” on Monday, June 4, at the central office in Pasig City and in regional offices in Cebu, Iligan, and Marawi, among others to protest the grave abuses against employees and “the gross mismanagement of finances and operations of the Corporation.” They sent blurred photos of their nationwide protests to the media.

“The dedicated officers and employees are distraught on how the Corporation is being mismanaged and through this vigil they hope that their appeal is heard by the Board of Directors and President Duterte. They pray that the situation in PhilHealth be resolved as soon as possible by the appointment of a competent, fair and respectable president and CEO,” they said in a statement.

The employees slammed the management for the billions in financial losses incurred in 2017, compared to the P250-million loss in 2016.

In its unaudited financial statement, PhilHealth reported P8.9 billion in losses. However, after the amount was publicized and questioned, the agency said the loss amounts to only P4.5 billion – still an almost 200% increase from 2016.

The employees also said the agency failed to achieve its performance commitments in the same year. From a performance rating of more than 90% in 2016, PhilHealth gained a dismal grade of 53% in 2017.

“These twin indicators (financial loss and poor corporate performance rating) are the concrete consequences of the incompetent management and lack of direction which has plagued the Corporation of late,” they said in their statement.

“As if these were not enough, the continuously abusive, and insensitive leadership by Interim OIC Pres. & CEO Celestina Ma. Jude de la Serna has brought about widespread demoralization among PhilHealth employees and officers across the entire Corporation,” the statement read.

Instead of addressing the problems of the agency, the employees claimed De la Serna and other board members engaged in “anti-employee actions,” including the reduction of the employment periof of casual employees from one year to just 3 months, deduction of P2,200 from the 2017 collective negotiation agreement incentive of rank-and-file employees, and reshuffling of employees, among others.

“In an arrogant display of power, despite strong recommendation for renewal of employment by supervisors, she fired 17 casual employees who allegedly expressed objections to her oppressive policies,” the employees alleged.

Earlier, De la Serna said in a dzMM interview that she decided to reshuffle some of the regional officers because they have been in their respective posts for decades. She said she had to do it in order to implement change. De la Serna, however, has yet to respond to employees’ other allegations.

Rappler first reported that De la Serna spent at least P627,000 in government funds for her accommodations, flights to and from her hometown in Taglibaran, Bohol, and terminal fees, in just a year as officer-in-charge.

PhilHealth resident auditors have also asked De la Serna to explain her receipt of previously disallowed allowances and per diem during virtual meetings, which amount to almost a million pesos, including travel expenses.

President Rodrigo Duterte has appointed Roy Ferrer to replace De la Serna following allegations against her. She, however, remains in the Board as representative of migrant workers, her original appointment. – Rappler.com