Facebook Twitter Copy URL
Copied
The Court of Appeals sides with Piatco this time and says it should not be obliged to pay the government and its lawyers $6 million in arbitration costs, $275,973 of which is for Sereno

MANILA, Phillippines – The Court of Appeals (CA) ruled as illegal the hiring and payment of fees to the local and foreign lawyers of the government – including ousted chief justice Maria Lourdes Sereno – in the Philippine International Air Terminals Company Incorporated (Piatco) case from 2004 to 2009.

“The fact that the [government] failed to comply with the relevant statutory requirements before incurring such expenses, the bulk of which consists of private lawyers’ fees, and failed to abide by the public policy that government procurement be affected through public bidding, makes the [government’s] arbitration expenses illegal and the contracts upon which they are based, as void,” the CA’s special 11th division said in an amended decision dated June 4, but released to media only on Friday, June 8.

The CA also said that Piatco shouldn’t be made to pay $6 million in arbitration costs to the government and its lawyers. Sereno was entitled to $275,973 of the $6 million, a total amount shared among her and other private lawyers like former Justice Florentino Feliciano as well as lawyers from the Office of the Solicitor General (OSG).

It is a turnaround from an earlier decision by the CA’s 17th Division in January 2017.

What’s the case about? Piatco won the contract to build the Ninoy Aquino International Airport (NAIA) Terminal 3 in 1997, but in 2003, the Supreme Court nullified this contract.

The government won with the help of foreign lawyers and private Filipino lawyers like Sereno. Sereno said that from 2004 to 2009, she earned from the Piatco case a total of P30.3 million or the peso equivalent of $745,000 at the time.

The arbitral tribunal also ordered Piatco to pay the Philippine government $6 million, or what it considered the “reasonable cost” of arbitration that the case cost the government.

When the Philippine government tried to claim the $6 million by filing a petition at the Mandaluyong Regional Trial Court (RTC), it lost its case as the lower court sided with Piatco and said the company should not be obliged to pay. 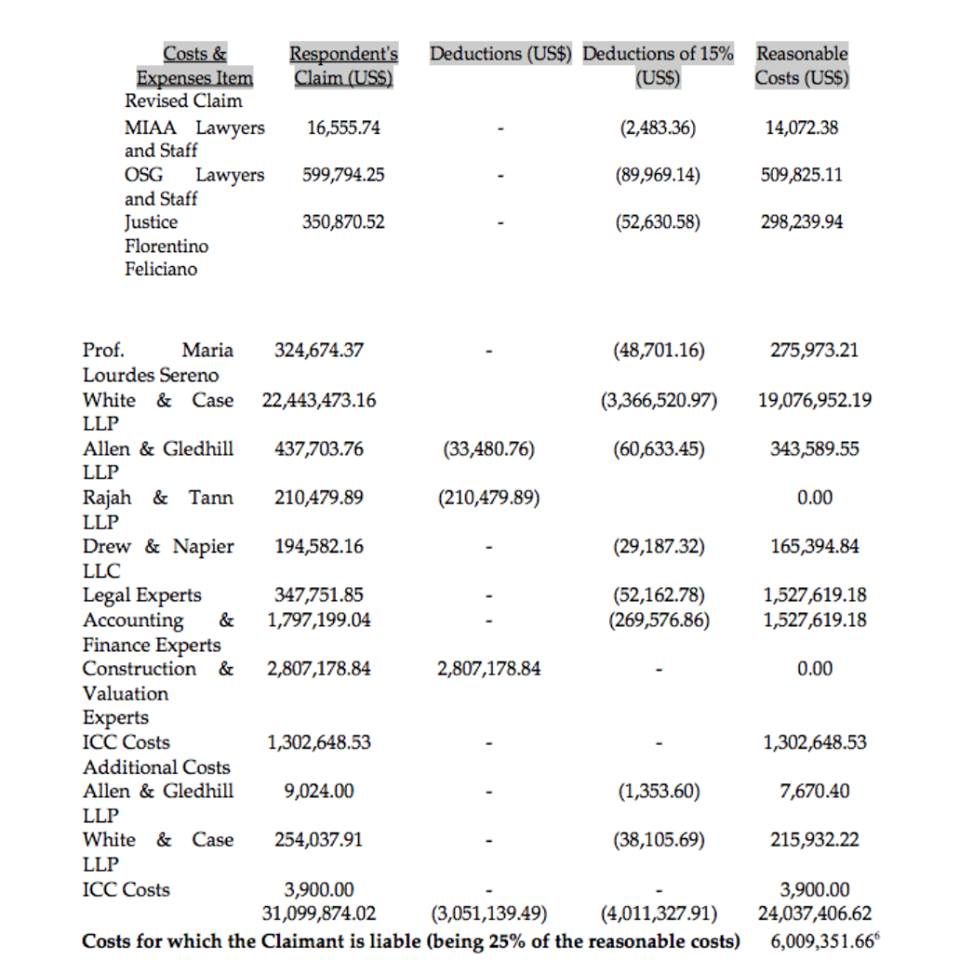 The flip-flop. In January 2017, the Court of Appeals 17th Division reversed the trial court and ordered Piatco to pay $6 million to the government immediately. Piatco appealed.

In the January 2017 decision, the CA said that when the Office of the Solicitor General (OSG) hired the lawyers, it “possessed both the authority and funding against which the expenses for such engagement will be charged.”

“As such, there is no need for the enactment of a law appropriating funds therefore as these expenses were charged to the agencies concerned,” the CA’s 17th Division said.

The CA also said then that even former president Gloria Macapagal Arroyo acknowledged the hiring.

This recent June 4 decision by the Special 11th Division backtracks on the other division’s word. It was from a different set of justices, led by Associate Justice Ramon Bato, with concurrences from Associate Justices Rodil Zalameda and Samuel Gaerlan.

“The [government] has neither shown before the arbitral tribunal nor this Court that the arbitration costs and expenses were paid in pursuant of an appropriation made by law,” the Special 11th Division said.

What is the new decision? The CA’s recent decision said that the OSG should have sought the approval of the Commission on Audit to go ahead with the hiring and the payment, or cited an appropriate law, neither of which were done, said the CA.

The CA also said it didn’t go through the proper procurement process.

The crucial part in the timeline is that between the two decisions, the Commission on Audit (COA) came out with a special report in September 2017 that said the hiring of lawyers did not comply with the provisions of Republic Act 9184 and its Implementing Rules and Regulations (IRR).

“In the hiring of local and foreign lawyers, the petitioners violated the fundamental public policy on the use of public funds,” the CA’s Special 11th Division said.

The CA added: “There can, thus, be no doubt that the [government’s] arbitration costs and expenses were not only irregular and unnecessary, these were also excessive, extravagant and unconscionable.”

The dispositive portion of the decision states that the CA is reinstating the decision of the Mandaluyong Trial Court that denied the government’s claim to the $6 million.

There is no mention of a refund. It is the COA that usually orders refunds through notices of disallowance.

Sereno’s Piatco fees were cited as a ground for impeachment against her, with complainant Larry Gadon saying it was not completely declared in her Statements of Assets, Liabilities, and Net Worth (SALN).

In the end, it was the alleged non-filing and non-submission of SALNs that ousted her in an unprecedented decision that considered her never having the right to hold the chief justice post from the start. – Rappler.com