MANILA, Philippines – The fate of the Mindanao peace process hangs on the final version of the Bangsamoro Basic Law (BBL), which will be decided by a Congress bicameral conference committee in July.

“I’d like to declare here that change is coming to the Bangsamoro,” Jaafar said in his opening speech, promising “fiscal autonomy,” “empowerment,” and “economic development” under the new region.

Jaafar’s mood changed later when government officials explained that the draft of the Bangsamoro Transition Commission (BTC), which he chairs, cannot be restored in its entirety.

“We are revolutionaries. We are not trained to talk much, but we are trained to do more,” Jaafar said in front of an audience that included Defense Secretary Delfin Lorenzana and officers of the Armed Forces of the Philippines (AFP).

‘No BBL, no decommissioning’ 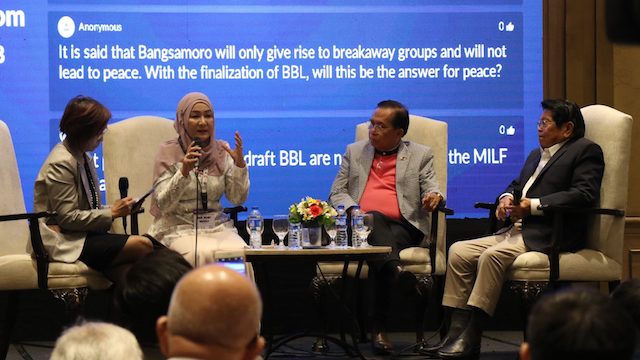 It can’t be any BBL. Jaafar said they want “all the provisions retained” to make sure that the law complies with government commitments in the peace deal.

Jaafar frowned upon the proposed law that passed the Senate. “Maraming (There are many) amendments sa (in the) Senate. I think it’s over 100. We raised objections to some of those amendments when we were at the Senate,” Jaafar said.

Among the significant amendment in the Senate is the deletion of a section listing the reserved powers of the national government, effectively removing the Bangsamoro region’s power over all other areas not on the list.

“That is a hypothetical question. We will answer that when proper time comes,” said Jaafar.

The House version allowed only one plebiscite for towns and provinces to join the new Bangsamoro region, rejecting BTC’s intent to hold regular plebiscite within 25 years.

Both lowered the Bangsamoro region’s annual block grant or its share of the national internal revenue from the proposed 6% or P72 billion to 5% or P59 billion.

“We decided not to issue specific position vis-a-vis the situation now because the process is still continuing. It’s not final,” said Jaafar.

Supreme Court and plebiscite, too

This is the difficult balancing act that the members of the bicameral committee will need to make. (READ: Bicam members: Who will finalize the Bangsamoro law?)

Sahali maintained that certain provisions in the BTC draft had to be removed to avoid the fate of the peace process during the Arroyo administration, when the High Court declared the Memorandum of Agreement on Ancestral Domain (MOA-AD) as unconstitutional.

“Congress cannot pass a law that is unconstitutional. Let’s not take that lightly,” Dureza said, too.

The BBL will also be subjected to a referendum. The people will have to agree to replace ARMM with the new region or everything could go to waste.

“We realize the process of legislation but the interest of the Bangsamoro cannot be taken for granted. If people reject that in a plebiscite, what can we do?” said Jaafar.

There is frustration among the people, especially with the Senate version. (READ: Bangsamoro region ‘lesser than ARMM’ feared)

“We explain to them that the process is still continuing. The BTC continues its engagement in a bicameral and individual lawmakers, leadership of the house and the senate, and executive department,” said Jaafar.

Dureza said it is important that all stakeholders help in managing their own expectations and the people on the ground.

“We should not raise too much expectations but I’m sure the public and the greater table will welcome whatever headway we will have,” said Dureza.

“We are working towards very compliant BBL, close as much as possible to the CAB. It’s a signed agreement. But remember there are parameters also to deal with. Constitutional parameters are also important,” Dureza said.

The peace process is at another critical point, requirng a compromise from all sides.

“I see a better light at the end of the tunnel,” Dureza said when the panel discussion was heating up. He turned to Jaafar and held his arm.

Jaafar forced a smile. “Let’s hope for the best,” he said. – Rappler.com