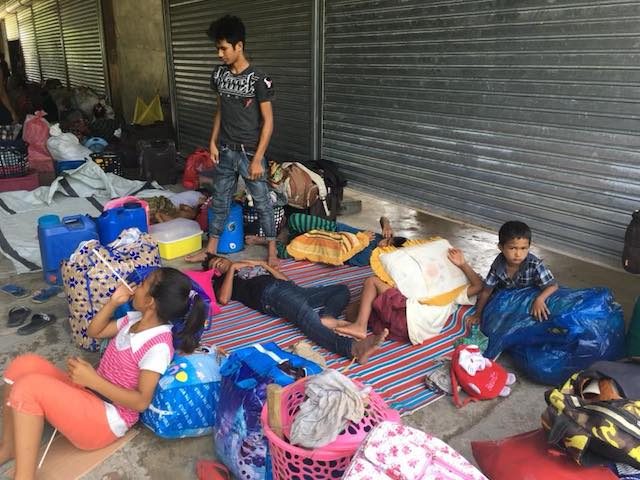 Residents fleeing with their belongings and their farm animals were photographed along the roads of Buliok Complex in Pikit, Cotabato.

The military said it launched an operation in the southern Liguasan area against the Bangsamoro Islamic Freedom Fighters (BIFF), a local armed group that has members who pledged allegiance to the Islamic State.

Lawyer Naguib Sinarimbo said there are reports of evacuation in at least 4 other towns of Maguindanao – Pagalungan, Datu Montawal, Rajah Buayan, and General Salipada K. Pendatun. He was the former executive secretary of the Autonomous Region in Muslim Mindanao (ARMM).

The displacement also comes as the Muslims prepare to celebrate Eid al-Fitr, marking the end of the fasting month of Ramadan.

“I fear it’s creating a lot of resentment. You have problem on the BBL and you cause displacement during Ramadan, you may be pushing people to the extreme,” Sinarimbo said. (READ: Final version of BBL holds fate of Mindanao peace process)

Major General Cirilito Sobejana said the military said it launched an offensive against the an “ISIS-inspired group in southern Liguasan area,” referring to the BIFF faction of “Commander Turaifie.”

The group has been known to have members who are experts in bombmaking, including the slain Basit Usman who coddled notorious foreign terrorist Zulkifli bin hir or Marwan. They were the targets of the botched police operation in Mamasapano.

BIFF has since splintered into factions, according to the military. Turaifie’s group has reportedly pledged allegiance to ISIS.

Sobejana, the newly appointed commander of the Maguindanao-based 6th Infantry Division, said they are pursuing a “more aggressive” and “sustained” war against the terror group.

“No cause for alarm. We are deliberate in our actions,” Sobejana said. – Rappler.com