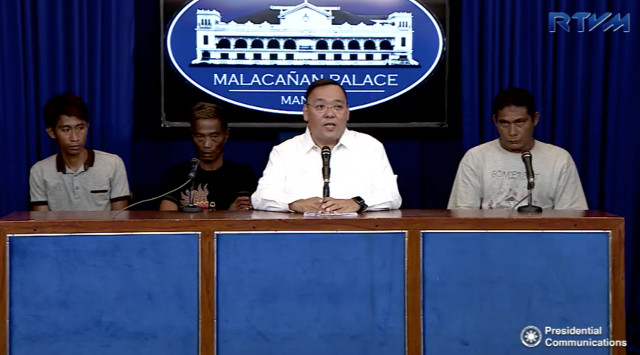 MANILA, Philippines – Presidential Spokesperson Harry Roque brought 3 fishermen all the way from Masinloc, Zambales to attest to the benefits brought about by the Duterte administration’s approach to China.

The 3 fishermen – Romel Cejuela, Delfin Egana, and Jurry Drio – appeared at the briefing of Roque with Malacañang reporters on Monday, June 11, after media reported on the taking of Filipino fishermen’s catch by the China Coast Guard in Scarborough (Panatag) Shoal.

Roque ostensibly brought along the fishermen so that reporters could ask them questions about the incident. But, tellingly, Roque fielded his own questions. Usually, in Palace briefings, Roque does not ask questions to resource persons he invites to join him.

The spokesman’s manner of introducing the fishermen also showed his intentions.

“They themselves will attest that they were only able to fish in 2017 when there came a new policy under the Duterte administration where we stopped fighting China,” said Roque in Filipino.

Then the spokesman himself posed the first questions to the fishermen.

Roque: Tanong ko lang, kailan kayo huling nangisda diyan sa [Scarborough]? (Can I just ask, when was the last time you fished there in Scarborough?)

Roque: Inaano kayo? (Doing what to you?)

Reporters then got the chance to ask their questions. Most wanted more details about the incident with the China Coast Guard. In the middle of the Q and A, however, Roque again intervened to ask another question of his own.

“Okay, this is my question now. Before, you were stopped in 2012. What do you want to tell the Filipino nation, because many are saying we should fight China? There are those saying we should be more hardline with how we treat China to the point that there will be a rift. What do you want? You tell the Filipino nation now,” said President Rodrigo Duterte’s spokesman, addressing the fishermen beside him.

Cejuela replied that it’s better to stick with the current policy on China because stronger actions could make it hard for them to pursue their livelihood.

(For me, maybe this is better because if we dig up the issues again, we’ll be forced to abandon our source of livelihood. Because they will again stop us from entering.)

Cejuela and Egana revealed more details about catch-taking by the China Coast Guard, which, based on their accounts, is a regular occurrence.

They said that, starting November 2017, their small boats have been allowed by the Chinese to enter Scarborough Shoal, but that they have to park their bigger boats farther away.

Once they fill their coolers with catch from the lagoon, however, China Coast Guard personnel approach them and alight on their boats.

(They will look at our coolers and choose the good catch. We can’t do anything because we just want to be agreeable since their big boats are there. What can we fishermen do if we refuse them? We’d be like crushed cans.)

Cejuela, however, said he does not consider this harassment.

(We just want to make it clear that there was no harassment. They were just forceful in taking our catch.)

China Coast Guard personnel also sometimes give them cigarettes, noodles, and water “in exchange” for their catch, said Cejuela.

In the middle of reporters’ questioning, Roque wondered out loud about the use of the word “harassment” to describe what the China Coast Guard did. The fishermen themselves, said Roque, did not use the term.

Reporters then zeroed in on this, which appeared to irk Roque.

When GMA-7 reporter Joseph Morong started on a series of questions about how the fishermen themselves define harassment, the presidential spokesman lost his cool.

“I’m sorry, but you can’t do a documentary on my press briefing,” said Roque, who added that Morong had “asked 7 questions already.”

Morong responded by saying he was asking questions because it was a press briefing and because matters were still not clear.

After ensuring government actions on the incident, Roque ended the press briefing.

While Roque denied the Scarborough Shoal incident was a case of harassment, he said the actions of the China Coast Guard were “unacceptable” and that they should be “disciplined” by Chinese authorities.

Cejuela thanked the President for making it possible for them to fish again in Scarborough Shoal. (READ: Carpio to Duterte gov’t: File new case vs China) – Rappler.com