Sereno: Engaging with youth is priority now, not running for office 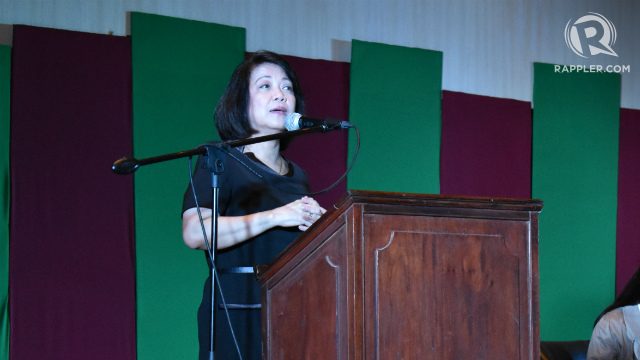 “Ang future plan ko (My future plan) is I am going to lend my voice to the voiceless. I am willing to continue engaging young people, especially in the national conversation on the future of this country,” she said during the question-and-answer part of a program at the University of the Philippines.

Talks about her plan to run for the Senate on the opposition slate have been floating after she was removed from her post in May 2018.

Voting 8-6, members of the SC en banc granted the quo warranto petition filed by Solicitor General Jose Calida. Many cried foul over the decision, condemning the Duterte administration for orchestrating Sereno’s removal. (TIMELINE: The many times Duterte and Sereno clashed)

The Integrated Bar of the Philippines (IBP), meanwhile, deemed the petition as unconstitutional and had called on the High Court to reverse its decision.

Sereno has since filed a motion for reconsideration, calling the decision “null and void” because it violated her right to due process.

During her speech at the 2018 Philippine Intercollegiate Debating Championship, Sereno once again hit the attacks on the independence of government institutions. She raised the issue of intimidation of institutions mandated by law to be independent, like the judiciary, the Ombudsman, and the Commission of Human Rights.

“So, what we have now is a concerted effort to try to intimidate those who want to push for truth and order. You have the use and abuse of language to weaken institutions, and we have seen this, the continued attacks against institutions that are supposed to guard democracy,” she said.

“We have seen the institutions that are supposed to show independence but are not showing enough of the kind of independence that is important for us to arrive at a decision as a country,” Sereno added.

Her pronouncement on such attack is not without basis, according to several groups.

Just recently, United Nations Special Rapporteur on the Independence of Lawyers and Judges Diego Garcia-Sayan said that the Philippine judicial independence is “under attack” after the ouster of Sereno.

“I think the intimidating effect and erasing from the map the chief justice in an impugn way, that liquidates and neutralizes the independence of many individuals,” he said

According to him, the fate of Sereno sends a “chilling effect” or instills fear on the other justices and the lower court judges, preventing them from asserting their independence and freedom of speech.

Garcia-Sayan’s comment drew the ire of President Rodrigo Duterte, who told him to “go to hell.” – with reports from Jane Bautista/Rappler.com

Ken Leonardo is a Rappler intern. He is a journalism student at the University of the Philippines in Diliman.