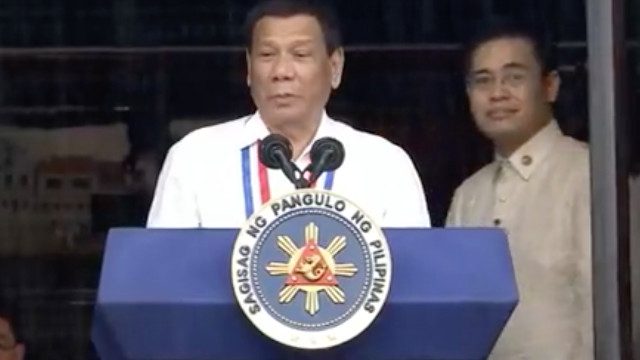 MANILA, Philippines – President Rodrigo Duterte was heckled during his speech at his first Independence Day ceremony as chief executive in Kawit, Cavite.

Duterte could only look on from his perch on the historic balcony of Emilio Aguinaldo’s house.

Presidential Security Group personnel lost no time in restraining the protesters, grabbing paper signs they were holding out, and forcefully ushering them out.

The paper signs indicated that the protesters belonged to a group called Bayan ST.

The shouts were enough to get Duterte’s attention. Chief of Presidential Protocol Robert Borje rushed to his side to whisper in his ear, seemingly about the protesters.

“Hayaan mo lang (Let it be), it’s freedom of speech, you can have it. I will understand…. ‘Di bale, ‘di naman lahat eh (Never mind, it’s not everyone),” Duterte said, half to Borje, half to the audience.

“Our Constitution guarantees freedom of the press, freedom of assembly, and free expression. I will just advise the law enforcement to just deal with them peacefully and [follow] maximum tolerance,” he continued. (READ: Duterte on Independence Day: Protect democracy, cherish PH sovereignty)

As the protesters were brought out of the venue, Duterte proceeded with the rest of his speech.

This is the first time Duterte was heckled at a formal, pre-arranged event. During his second State of the Nation Address, he himself made a last-minute visit to the protesters gathered outside the Batasang Pambansa Complex.

This is also the first time Duterte attended an Independence Day ceremony as president. Last year, he was scheduled to lead the rites in Luneta, but he was unable to go because he had supposedly felt under the weather. Vice President Leni Robredo led the rites in his stead. – Rappler.com