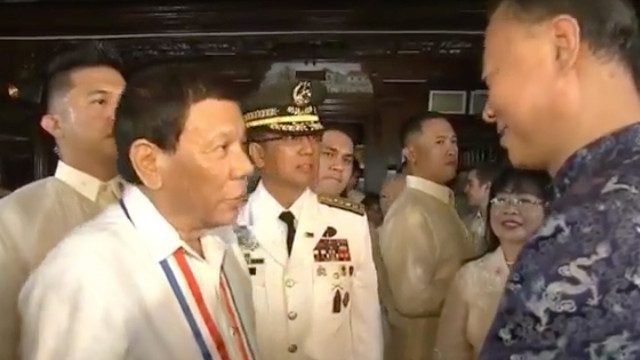 MANILA, Philippines – After speaking with President Rodrigo Duterte during Independence Day rites, Chinese Ambassador to the Philippines Zhao Jianhua vowed that China Coast Guard personnel proven to have taken catch from Filipino fishermen will be “disciplined.”

“They will be disciplined in accordance with our own regulation,” said Zhao during a chance interview with reporters on Tuesday, June 12, in Cavite.

Echoing Duterte’s style of speaking, the Chinese envoy even warned of dire consequences for the errant Coast Guard personnel.

Duterte supposedly relayed his concerns about the catch-taking incident to Zhao earlier during the ceremony which was attended by other ambassadors.

“President Duterte made it clear once again to me the concerns of the Filipino fishermen, as my President (Xi Jinping) was concerned about Chinese fishermen,” said Zhao.

He also gave assurances that the China Coast Guard will be prohibited from taking Filipino fishermen’s catch again, calling the case an “isolated incident.”

However, he left it to the ongoing investigation to determine if the China Coast Guard indeed “forcefully” took the fishermen’s catch. Zhao said it could have just been an exchange of goods since Filipino fishermen were also given cigarettes, noodles, and water in return.

“From their (Filipino fishermen’s) remarks, I can see that it’s primarily barter trade,” said Zhao.

However, the 3 fishermen involved in the incident captured in a GMA-7 report said during a press conference at Malacañang on Monday, June 11, that the Chinese would only “sometimes” give them these items.

The fishermen also made it clear that the Chinese “forcefully” alighted on their boats in order to pick the best of their catch. The fishermen said they were scared to refuse the Chinese.

Malacañang itself refuses to call the incident a case of “harassment.” (READ: Carpio to Duterte gov’t: File new case vs China) – Rappler.com