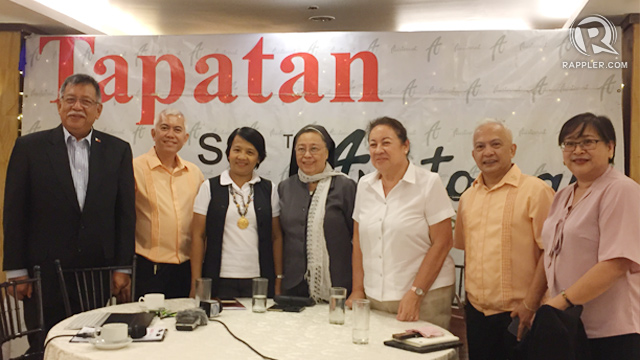 MANILA, Philippines – President Rodrigo Duterte’s constant cursing during speeches is affecting the youth, experts said on Monday, June 18, as an activist nun said the chief executive should be more mindful of how he conducts himself.

At the weekly Tapatan sa Aristocrat forum in Manila, former St Scholastica’s College president Sister Mary John Mananzan was asked if Duterte’s cursing is affecting students. Mananzan said, “In fact, because he is President, he should not speak like that. Masyadong (malaki) ang impluwensya.” (His influence is too great.)

President Duterte is known to curse several times during speaking engagements. His speech before the Filipino community in South Korea last June 3 – where the kiss took place – was no exception.

Duterte’s speeches are often peppered with insults and curses targeted at a variety of persons, such as United Nations officials, human rights groups, critical government officials, and journalists. (READ: A foul-mouthed 2016: The year in Duterte’s curses)

Often, Duterte’s speeches are received with cheers and laughter from the audience.

With students constantly exposed to the President’s rhetoric through the media, Universidad de Manila Dean of Engineering Elmer Pineda said such behavior is becoming normalized.

(What students see on television, social media, the internet, and other places have a great effect. It’s as though these things are becoming normal. But in the academe, we try to explain to them that this is not normal.)

For France Castro, representative of the Alliance for Concerned Teachers party, teachers must step in and teach their students how to treat other people.

Asuncion Azcuna, outgoing dean of arts and sciences at St Scholastica’s College, said families also have a role to play in shaping the youth’s behavior.

She added, “The point is, do you really have to talk that way? Is that how you deal with every single person?” – Rappler.com