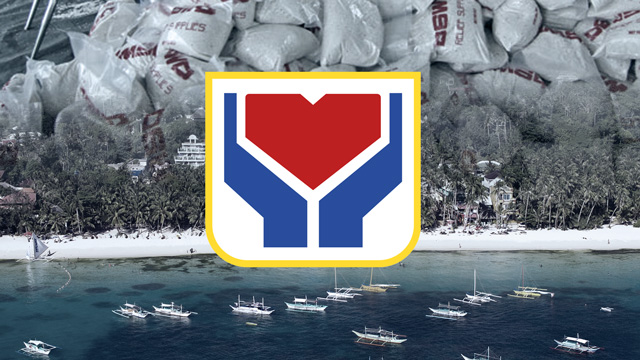 The food packs were among the relief goods for Boracay recipients in Barangay Balabag distributed on June 16 by the local Department of Social Welfare and Development (DSWD).

(Unopened canned goods like these, do not consume them because you may get poisoned. There is rust inside and there are bubbles in the sauce.)

Geamala, for her part, said she was saddened by the situation. She assured the Boracay recipients of the quality of the canned goods and that the expiration dates were regularly monitored.

(The rice we distributed in Boracay last Saturday came from Iloilo. The canned goods from our winning supplier/bidder have an expiration date of not less than two years.)

Geamala said she instructed her staff in Boracay to replace with new family packs those identified as contaminated canned goods and rice bags. At least 8 relief goods packs were returned and replaced by DSWD operations center as of this writing.

“Bear with DSWD as we are doing our best to serve the needs of Boracay residents and workers the soonest time possible. Nothng we can do but to help each other,” she stressed.

Geamala said she also requested from DSWD central office some 50,000 family relief packs to help the Boracay beneficiaries during the 6-month rehabilitation.

On the other hand, Kim-Sin Tugna of Rise Up Aklan said they will further inquire with the DSWD regional office why the alleged damaged food packs were distributed to intended beneficiaries in Boracay Island.

Tugna said the national government agencies should ensure food packs are safe for human consumption and ready-to-eat for Boracay residents.

(They must ensure that the relief goods to be distributed to Boracay residents are in good condition. We do not want the recipients to get sick due to food poisoning.”

Police authorities had assured the safety of DSWD staff in Boracay as additional security personnel were assigned to secure the operations center in Barangay Manoc-Manoc.

“Kung may problema, may concerns kayo at gustong mag-avail ng programs at services ng DSWD, (If there are problems and concerns or they might want to avail of programs and services of DSWD) kindly visit the operations center and you will be assisted,” Geamala said. – Rappler.com