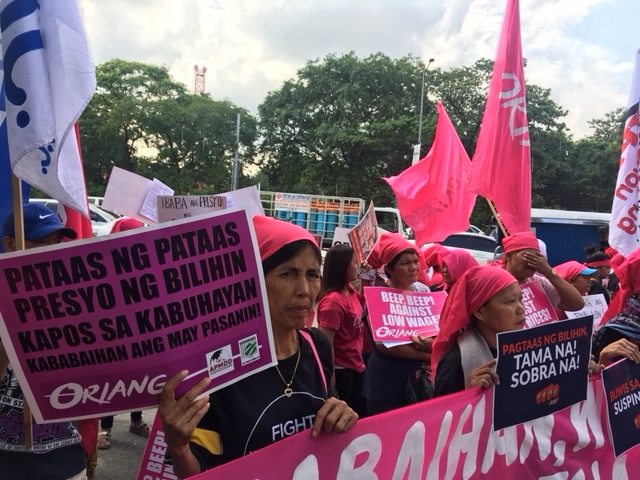 MANILA, Philippines – Like most mothers in a typical Filipino household, Flora Santos is responsible for the budget of the family. She decides what food to buy, how much money each person in the household gets, and does so on top of the daily chores.

Santos does not have a regular job, which makes budgeting even trickier. The flow of money in her household varies depending on a number of conditions.

She said this daunting balancing act just got tougher due to the implementation of the Tax Reform for Acceleration and Inclusion (TRAIN) law. (READ: Suspending TRAIN law amid higher prices ‘more harm than good’ – Diokno)

(All prices of food already increased. A set of bitter gourd was just between P5 to P7 before, now it’s P10.)

Santos, who is also the president of women’s group Oriang, claimed that TRAIN law inflicts economic violence against women.

She, along with almost a hundred more women, stormed the gates of the Department of Agriculture on Wednesday, June 20, and appealed for the government to suspend the TRAIN law.

Oriang and the Freedom from Debt Coalition (FDC), claimed women and children in the informal sector are the most affected by the measure. They also slammed the government for not giving enough programs for the poor.

(The Conditional Cash Transfer program is not good. It is not enough to give money to the poor. The amount the government gives is not enough.)

Santos added that the implementation of the CCT was not accompanied with educational and livelihood programs, which led to bad spending habits.

(They are poor and most are not educated. Not all know how to handle money, which is why some use it for gambling and their vices. That is because the money was just given to them.)

The groups also slammed the insensitive comments of some cabinet members to the poor. Santos appealed to budget secretary Benjamin Diokno and socioeconomic secretary Ernesto Pernia to be sensitive to the needs of the poor.

(We do not need insults. We need reforms.)- Rappler.com