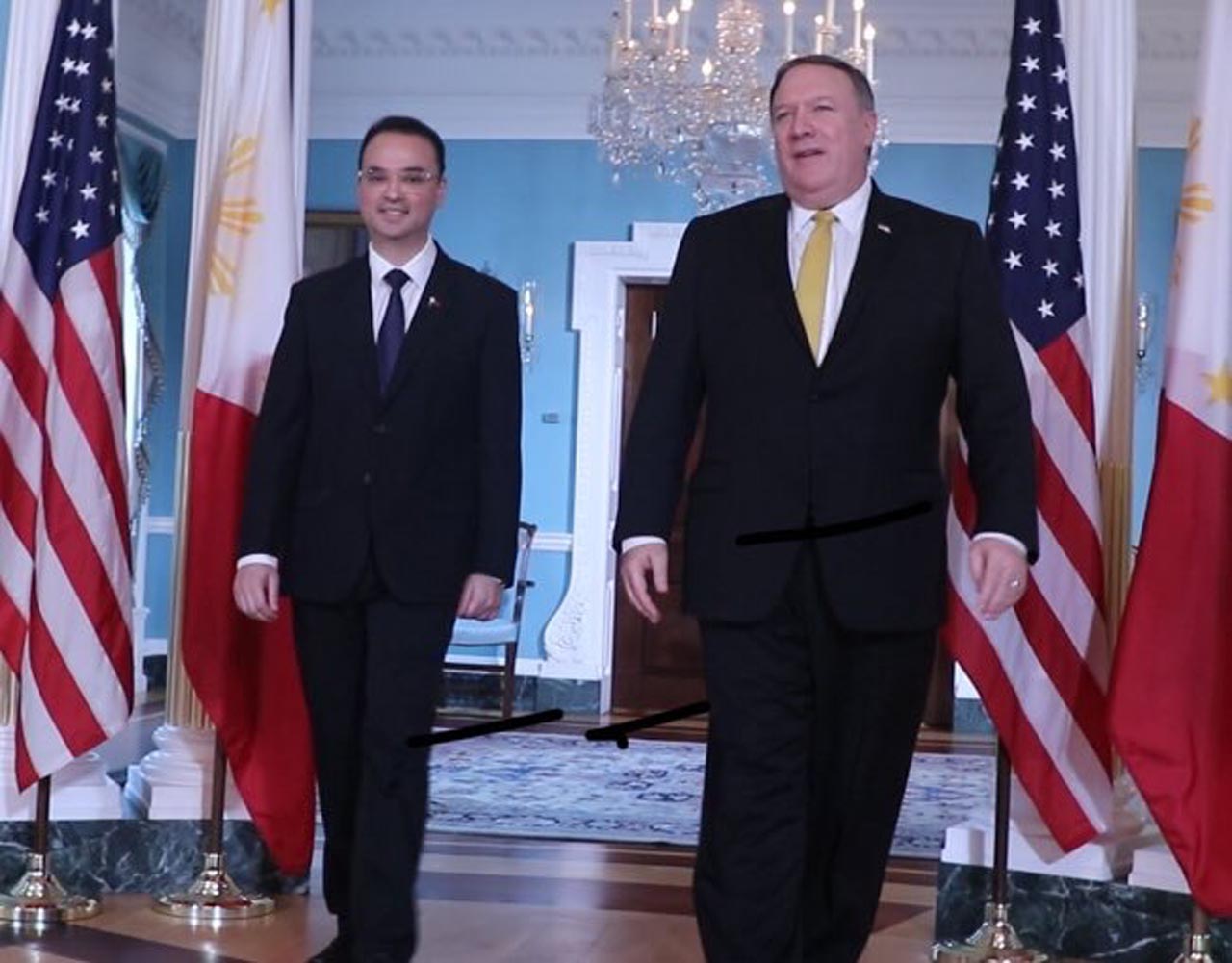 MANILA, Philippines – The Philippines and the United States reaffirmed their alliance and agreed to further reinforce this partnership during the first meeting of their top diplomats in Washington on Thursday, June 21.

During their meeting, Foreign Secretary Alan Peter Cayetano and US Secretary of State Mike Pompeo discussed regional issues and ways to improve bilateral trade and security cooperation, according to statements issued by the Philippine embassy in Washington and the US State Department.

“Secretary Cayetano and Secretary Pompeo had an open and cordial interaction at the State Department today and we are optimistic this would reinforce the ties that bind the relations between our two countries and peoples,” Philippine Ambassador Jose Manuel Romualdez said in a statement.

At the US State Department, Spokesperson Heather Nauert said Pompeo “reaffirmed the longstanding US-Philippines alliance and discussed ongoing efforts to address regional issues such as North Korea, the South China Sea, and counterterrorism.”

“The Secretary told Secretary Pompeo the Philippines views the current developments in the Korean peninsula with optimism and that the Philippines is hoping the positive momentum generated by the Singapore Summit will bode well for the broader Asia-Pacific region,” he added.

The Philippine embassy statement said the two officials “underscored the importance both the Philippines and the United States place on their shared historical and people-to-people ties and the strength of their defense alliance.”

Romualdez said Pompeo also “expressed hope” for another meeting between Duterte and Trump. The two earlier met in November last year, when the Philippines hosted the Association of Southeast Asian Nations (ASEAN) Summit and Related Summits, and the they apparently hit it off on a personal level.

Ties between the Philippines and the US, its defense treaty ally, went through a rough patch early in the Duterte administration. The Philippine leader hurled tirades and expletives at then President Barack Obama and the State Department under the latter’s administration for their statements critical of his campaign against illegal drugs.

Duterte had even threatened to scrap the Philippines-US Enhanced Defense Cooperation Agreement (EDCA), but yielded to the advice of security officials. He also took a liking to Obama’s successor, Trump.

The Philippine embassy said Cayetano and National Security Adviser Hermogenes Esperon Jr, who was also at the meeting, thanked the US for its assistance and cooperation “ in various areas, including counterterrorism and the rehabilitation of Marawi.”

On the Philippine side, the meeting was also attended by    Foreign Assistant Secretary Ma Lumen Isleta. – Rappler.com