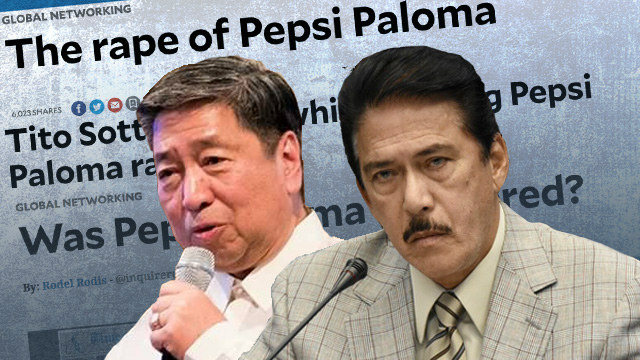 “The management of INQUIRER.net announced it would defer using articles written and submitted for publication by US-based writer Rodel Rodis pending the outcome of an inquiry on two articles he wrote and published in 2014,” the news website said.

The two articles implicate Sotto in the alleged cover-up of the rape of 80s teen star Delia Duenas Smith or Pepsi Paloma. Sotto has asked Inquirer.net to take them down, though the articles are still up on the website.

“Management has asked Rodis to substantiate his allegations in his two articles,” the statement said.

Sotto complained about a 3rd article, which was not written by Rodis. In its latest statement, Inquirer.net said nothing about the 3rd article, “Tito Sotto denies whitewashing Pepsi Paloma rape case,” written by Totel V. De Jesus. This article remains online as of posting time.

Sotto earlier announced that Inquirer.net will delete the articles, which he said are libelous.

Reacting to Inquirer.net’s recent statement, Rodis said on Facebook: “Congratulations to Senate President Tito Sotto for successfully persuading Inquirer.net to stop publishing my articles, the first step in eventually removing my articles implicating Sotto in the cover-up of the rape and ‘suicide’ of Pepsi Paloma.”

Sotto said he would prefer that Inquirer.net “take it down” than for him to “file charges in court.”

The request was Sotto’s latest attempt to ask news sites to take down articles critical of him.

In February 2016, Sotto threatened to sue Rappler and columnist Sylvia Claudio if the news site would not take down a January 2016 opinion piece titled “‘Magnanakaw’ sa Senado.” The piece was about the P1-billion allocation for contraceptives that was removed from the national budget.

Rappler did not take down this 2016 piece. – Rappler.com