Lacson: May God forgive Duterte, ‘make him atone for all his sins’

Jun 24, 2018 7:00 PM PHT
Rappler.com
Facebook Twitter Copy URL
Copied
'Between him and my God to whom I pray every single day... I don't even have to think of my choice,' says Senator Panfilo Lacson, in reaction to President Rodrigo Duterte calling God 'stupid' 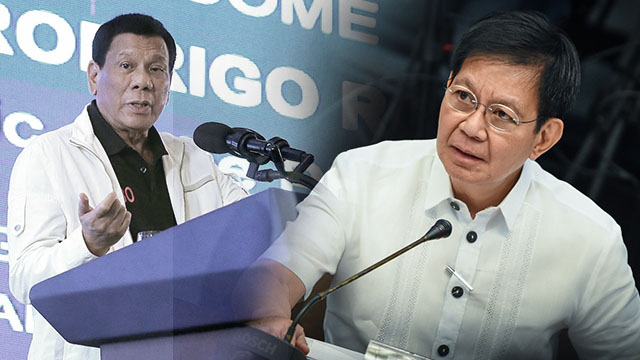 MANILA, Philippines – If made to choose between God and President Rodrigo Duterte, it’s no contest for Senator Panfilo Lacson.

Lacson issued a statement on Sunday, June 24, in response to Duterte calling God “stupid” over the Bible’s creation story.

The senator noted how he has often sided with the President in the past, even thinking of Duterte as “God’s gift.”

“In many conflicts with his political adversaries, I took his side more than I did not, even when sometimes I had my doubts because I believed he was different from all the presidents who led before him,” Lacson said.

“At times I thought he was God’s gift to a benighted land, hoping the elusive change for the better has finally come to our country under his leadership,” the senator added.

But after Duterte called God “stupid,” Lacson said he is definitely on God’s side.

“Between him and my God to whom I pray every single day and with whom I’ve found solace and comfort in all my difficult times, I don’t even have to think of my choice. May my God forgive him and make him atone for all his sins,” the senator said.

Actress Rita Avila earlier denounced Duterte’s tirade against God, saying: “To all Duterte fans, I held much hope in him. But sorry, this is too much.”

The President has repeatedly threatened the Catholic Church, whose leaders in the Philippines have been critical of the government’s bloody anti-drug campaign.

Duterte, however, recently claimed he respects the Catholic Church, though his previous remarks show otherwise. (READ: Choosing between Hell with Duterte and Heaven with the CBCP) – Rappler.com