Jun 25, 2018 4:55 PM PHT
Mara Cepeda
Facebook Twitter Copy URL
Copied
(UPDATED) The progressive legislators also want to investigate the death of Genesis Argoncillo, a 25-year-old nabbed by the police in its anti-tambay operations and who later died in prison 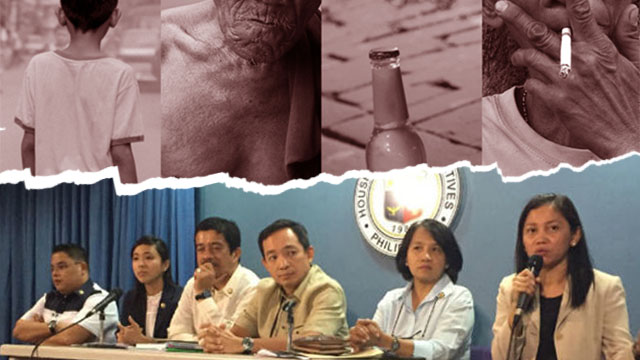 MANILA, Philippines (UPDATED) – Progressive lawmakers forming the House of Representatives’ Makabayan bloc want to investigate, in aid of legislation, President Rodrigo Duterte’s order for the police to go after “tambays” or loiterers.

The following legislators filed House Resolution (HR) No. 1969 on Monday, June 25, asking the House committee on human rights to conduct the probe.

The lawmakers also filed HB No. 1971 on Tuesday, June 26 seeking another investigation into the death of 25-year-old Genesis Argoncillo, a loiterer nabbed by the police in its anti-tambay operation.

“President Duterte’s verbal order to arrest vagrants, ‘tambays,’ or idle individuals opens a floodgate of abuses, especially in the midst of unresolved cases of policy brutality and extrajudicial killings in poor communities. It provides the PNP (Philippine National Police) a wide latitude in carrying out illegal arrests, illegal search and seizures, and in violating people’s right to mobility,” said the lawmakers.

The Makabayan bloc filed HR 1969 after the President ordered the police to round up loiterers on June 14. (READ: What you should know: Duterte administration’s crackdown on ‘tambays’)

Since then, the PNP has arrested at least 2,981 people for supposedly loitering in the streets while allegedly violating city ordinances on curfews, public smoking, public nudity, and drinking in the streets.

Duterte had cited the power of the state to act as parents of persons needing protection, when he defended his order against loiterers.

This sparked outrage among netizens and politicians, who argued loitering is not a crime.