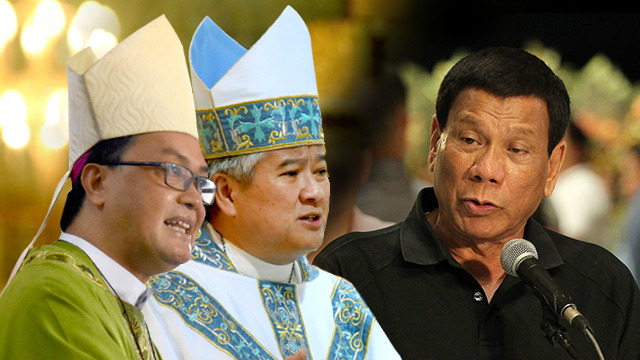 (How can he be a President for all Filipinos if he does not have respect for the Catholic faithful?)

(Most of his supporters are Catholics, right? Catholics will respect him even if he does not agree with the Catholic faith. But disagreement is not a license to insult.)

(Catholics respect the duties of the President, and his mandate as President. I hope he also respects Catholics even if he does not agree with the doctrines of Catholics.)

In his statement, David drew from his expertise as a leading Bible scholar. (READ: Tungkol kay Adan, Eba, at pananampalatayang Katoliko)

A priest for more than 30 years, David chaired the Commission on Biblical Apostolate of the Catholic Bishops’ Conference of the Philippines from 2009 to 2015.

David, a graduate of the Jesuit-run Ateneo de Manila University in the Philippines, also holds a doctorate in sacred theology from the Catholic University of Louvain, Belgium.

Reacting to Duterte, David said the President was blasting his own interpretation of the Bible.

He said Duterte’s version of the creation story is not found in the Catholic, Jewish, Protestant, Orthodox, and Iglesia ni Cristo Bibles.

(I’m sure that’s not the catechism taught by religious education teachers of Ateneo and San Beda. He might have been absent when the teacher explained it.)

Referring to the forbidden fruit eaten by Adam in the Bible, Duterte said, “Kinain ni Adam (Adam ate it) then malice was born. Who is this stupid God? Istupido talaga itong putang ina kung ganoon (That son of a bitch is really stupid if that is the case).”

Villegas: ‘Be firm in faith’

In his message, Villegas urged the youth of the Archdiocese of Lingayen-Dagupan to “be firm in faith” in the face of Duterte’s tirades.

“Through social media, you have been sadly exposed to the cursing, threats and shaming by the President of our country. Choose to love him nevertheless, but stay in the truth of our faith. Be firm in faith,” Villegas said.

Villegas said Duterte might not have been loved enough in the past.

Villegas said: “He must have received so much rejection and hurts in the past that he blurts out so much hatred and angst now. If he had been loved much, he would be giving so much of that love, too. He could be a victim of his scarred past and his wounded background. Pray for him with compassion.”

“We pray for his healing and for God’s forgiveness on him but we must rebuke his errors about our Christian faith. He is a person in authority and some of you might get confused when you hear him. To pray for him is not enough. We must serve you the truth as we pray for him,” the Lingayen-Dagupan archbishop said.

Villegas said he was writing his flock to defend them “from the gross errors” that they have been hearing.

“We are in a spiritual warfare against error and sin. Shield yourselves from error and guide your fellow youth in godliness. Read more about the faith. Study the true teaching of the Church,” Villegas said.

He added: “Harbor no grudge but be critical and discerning. Be respectful of your parents and those in authority and choose good manners all the time even if you hear and see the opposite. Do not bash back at those who bash you in social media. Fill social media with kindness and truth.”

Villegas said, “Take courage but be loving all the time. Be firm in the faith. Bawal ang duwag pero huwag makipag-away (Do not be a coward but do not pick a fight).”

Villegas is former president of the CBCP.

He is also a protegé of the late Manila Archbishop Jaime Cardinal Sin, who helped mount the peaceful EDSA People Power Revolution of 1986.

‘May God bless his heart’ – senator

While earning the ire of bishops, Duterte’s statements on a “stupid” God also prompted criticism from various sectors.

Senator Panfilo Lacson said he hopes God will forgive Duterte, as he will side with God if made to choose between God and the President.

Duterte himself did not press the brakes, as he insulted religious beliefs again in a speech on Monday.

Duterte also claimed he said nothing about God being stupid. He instead pointed out, “Your God is not my God because your God is stupid. Mine has a lot of common sense.” – Rappler.com