Jun 26, 2018 10:47 PM PHT
Lian Buan
Facebook Twitter Copy URL
Copied
'We choose only portions of the past that we like and call it tradition that we must preserve,' says Associate Justice Marvic Leonen 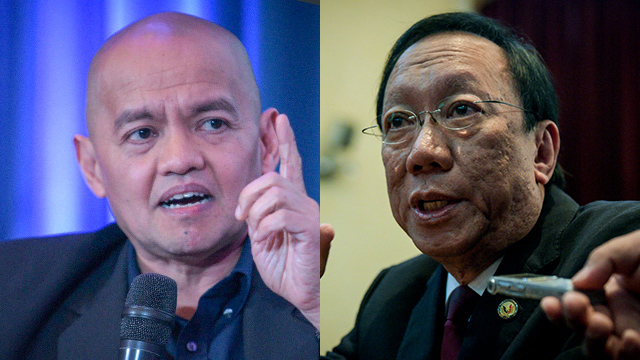 MANILA, Philippines – Solicitor General Jose Calida was grilled on the Supreme Court (SC) stand on Tuesday, June 26, as he was pressed to justify the prohibition on same-sex marriage when the 1987 Constitution is silent on the issue.

Associate Justice Marvic Leonen pointed out that the Constitution does not explicitly define marriage as a union only between a man and a woman. Repeatedly, Leonen asked Calida to cite a constitutional provision that would prove otherwise.

“[The Constitution] does not have to define because everybody knows, it is the big elephant in the room,” Calida.

But Leonen pressed on, sometimes pushing Calida to almost raise his voice, where the justice at one point said: “I’m still asking a question, counsel.”

Unable to cite a constitutional provision, Calida said he would clarify his position in the written memorandum that both parties have to submit to the High Court. Oral arguments ended on Tuesday, which means the Supreme Court will now move to resolve the petition.

Calida reasoned out, however, that the intent of the framers of the Constitution was to limit the marriage between a man and a woman.

“It may not be written black and white, but all the provisions there if we inter-relate it and together with traditions, there’s no other interpretation rather than marriage – as defined then and as defined now – is as between a man and a woman,” Calida said.

The silence of the 1987 Constitution on same-sex marriage did, in fact, pave the way for the passing of the Family Code, which then explicitly defined marriage as being only between a man and a woman.

“The framers of the Constitution in fact vote 34, and 4 abstentions, that the marriage referred in the Constitution is as between a man and a woman,” Calida said. (READ: Same-sex marriage: Flawed petition or unready Court?)

But Leonen said: “The constitutional commissioners are not gods, they may have committed a mistake, for instance, when they said that the tradition of marriage is what we should respect.”

“Why do we interpret our laws and Constitution in such a way that we impose something on the freedoms and happiness of others without showing a very viable reason except tradition?” Leonen asked.

Leonen hammered on, saying that in the past, the husband enjoyed far more rights than the wife, but all that has changed now.

“We choose only portions of the past that we like and call it a tradition that we must preserve,” Leonen said.

Leonen ventured into the topic of transcendental interest, a doctrine that if present, can be valid grounds for the Supreme Court to decide on a case despite procedural questions.

For example, said Leonen, the Supreme Court decided on petitions questioning the Reproductive Health Law and the Cybercrime Law even though there were no actual cases of injury yet, because there was transcendental interest involved.

Leonen said that if the Supreme Court should become more strict in applying the transcendental interest doctrine, “why only now?” (READ: Is timing right for same-sex marriage petition? Leonen warns of risks)

“Is it because the identity being asserted is one which the majority does not accept? One that feels odious, feels contagious, feels immoral?” Leonen said.

Calida did not answer directly, but said that same-sex marriage cannot be compared to the Reproductive Health and Cybercrime laws because the latter are penal laws.

“There’s a threat of prosecution, here nobody will be prosecuted,” Calida said.

Nobody will indeed be prosecuted, but rights will be deprived, petitioner Jesus Falcis III insisted.

“A lot of Lesbian, Gay, Bisexual, Transgender (LGBT) are not privileged enough to be realistic [which means they cannot just] wait for Congress, or wait for the future to give it to you,” Falcis said.

He added: “People who are realistic never achieve change, it was always the unrealistic people who were able to achieve changes that would protect their rights and position in society.” – Rappler.com