Robredo camp on sub judice fine: We defended ourselves vs Marcos’ lies

Jun 27, 2018 11:50 AM PHT
Mara Cepeda
Facebook Twitter Copy URL
Copied
(UPDATED) The Marcos camp, meanwhile, says it will 'respect the decision of the Tribunal and will be more mindful of the sub judice rule in the future' 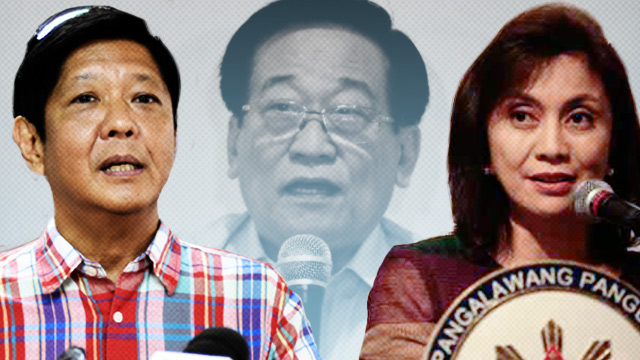 MANILA, Philippines (UPDATED) – A day after the Supreme Court (SC) fined them for breaking the sub judice rule, the lead lawyer of Vice President Leni Robredo argued that they were just defending themselves from the “lies” of the camp of former senator Ferdinand “Bongbong” Marcos Jr.

Veteran election lawyer Romulo Macalintal made the statement on Wednesday, June 27, after the Hight Court, acting as the Presidential Electoral Tribunal (PET), unanimously voted to fine both parties and their counsels P50,000 each over the sub judice rule.

“We have not received a copy of the resolution and we don’t want to preempt the Supreme Court. However, we stand firm that the lies propagated by the Marcos camp called on us to defend ourselves,” said Macalintal.

“Sometimes, we have no choice but to speak out in order for the public to be enlightened amid the relentless black propaganda, which aims to discredit the recount being spearheaded by the PET,” he added.

The Robredo and Marcos camps, however, have not observed this rule since Marcos filed the electoral protest against the Vice President two years ago.

They have repeatedly called for press conferences and granted interviews, where each party disclosed details about the pending election case.

Just last week, both parties argued publicly over the use of a plastic magnifying lens by a Marcos camp revisor inside the revision area.

Just like Macalintal, Marcos’ lead legal counsel, George Garcia, told Rappler they have not yet received a copy of the resolution.

He said once the Marcos camp confirms the SC’s decision, they will “abide as our show of highest respect to the tribunal and the rule of law.”

On Wednesday afternoon, Marcos’ spokesman, lawyer Vic Rodriguez, said in a statement: “From the filing of the protest and all throughout its processes, we have been respectful of the Tribunal. We respect the decision of the Tribunal and will be more mindful of the sub judice rule in the future. We will continuously abide by the Tribunal’s rulings as we continue our quest for justice in our on-going election protest.” – Rappler.com